‘Best freshman in the country’? Iowa’s Caitlin Clark can make her case in the tournament.

The NCAA women’s tournament features an ultra-talented freshman who, by the end of the month, may have led her team to the Elite Eight in the River Walk Region.
No, we’re not talking about Connecticut’s Paige Bueckers. Well, it could be Bueckers, but it could also be Iowa’s Caitlin Clark, who is turning in her own stellar freshman season without quite as much fanfare.

In a potentially delicious scenario, Clark and Bueckers will meet in the Sweet 16 if the fifth-seeded Hawkeyes and top-seeded Huskies win their first two games. Iowa (18-9) faces Central Michigan in the first round and then could play fourth-seeded Kentucky or 13th-seeded Idaho State in the second round.

Clark will be relied on for much of the scoring.
The rookie is leading Division I in that category. Not leading Division I freshmen — Clark is leading all players in scoring, at 26.7 points per game. That puts her on pace to become the second freshman to lead the Division I women in scoring over a full season (per ESPN), and in this millennium only former Delaware superstar Elena Delle Donne averaged 25 or more points as a D-I freshman.
AD

Clark, who shot 42 percent from three-point range during the regular season, doesn’t just excel at putting the ball in the basket. The 6-foot point guard also handed out 6.8 assists per game, with 6.0 rebounds and 1.3 steals. In the Big Ten tournament, during which Clark led the sixth-seeded Hawkeyes to the final before they lost to top-seeded Maryland, she averaged 9.3 assists over four games.

After Clark hit nine three-pointers in a loss to Maryland last month, Terps Coach Brenda Frese said: “Caitlin Clark is the best freshman in the country. If you can go against a top-10 program like us — and we did everything we could do to stop her — to get 34 points says it all. She was a difficult matchup for us.”

Little wonder that Clark earned Big Ten freshman of the year honors and was unanimously selected for the conference’s first team. Along the way she scored 30-plus points 11 times, and through the conference tournament she leads Division I in total assists and three-pointers made and attempted.
AD

“I think, in her four-year career, I’m going to run out of adjectives to describe her,” Iowa Coach Lisa Bluder said in January.
Around that time, an unidentified Big 12 coach told the Athletic: “She’s got a Steve Nash quality to her, which I think is impressive. … From what I’ve seen, Caitlin is the best freshman in the country. She’s so hard to guard. She’s got an NBA scoring mentality.”

Of course, backers of Bueckers might have something to say about the “best freshman” title. The U-Conn. star shot better from the field than Clark, had notably fewer turnovers and led her team to a superior record (24-1) while averaging 19.8 points, 4.6 rebounds, 6.2 assists and 2.4 steals in the regular season.
Bueckers, who played with Clark on Team USA under-16 and under-19 squads, was also a slightly higher-ranked recruit and plays for the foremost program in women’s hoops. Not surprisingly, in that light, she has been the target of far more Google searches over the past year. Perhaps more irritatingly to the Clark camp, Bueckers has made the list of 15 finalists for the John R. Wooden Award, whereas the Iowa star got dropped when the field was winnowed to 20.

“Caitlin doesn’t act like a prima donna off the court,” Bluder said in January. “She’s a goof. … She’s somebody that likes to give a lot of talk, and then it’s fun to give it back to her, because she can take it. She’s not scared to laugh at herself.”

I cannot believe she's not 1st team All American
Reactions: goodbyebobby, LetsGoHawks83 and cigaretteman
U

The most exciting player in the NCAA tournament — Caitlin Clark. 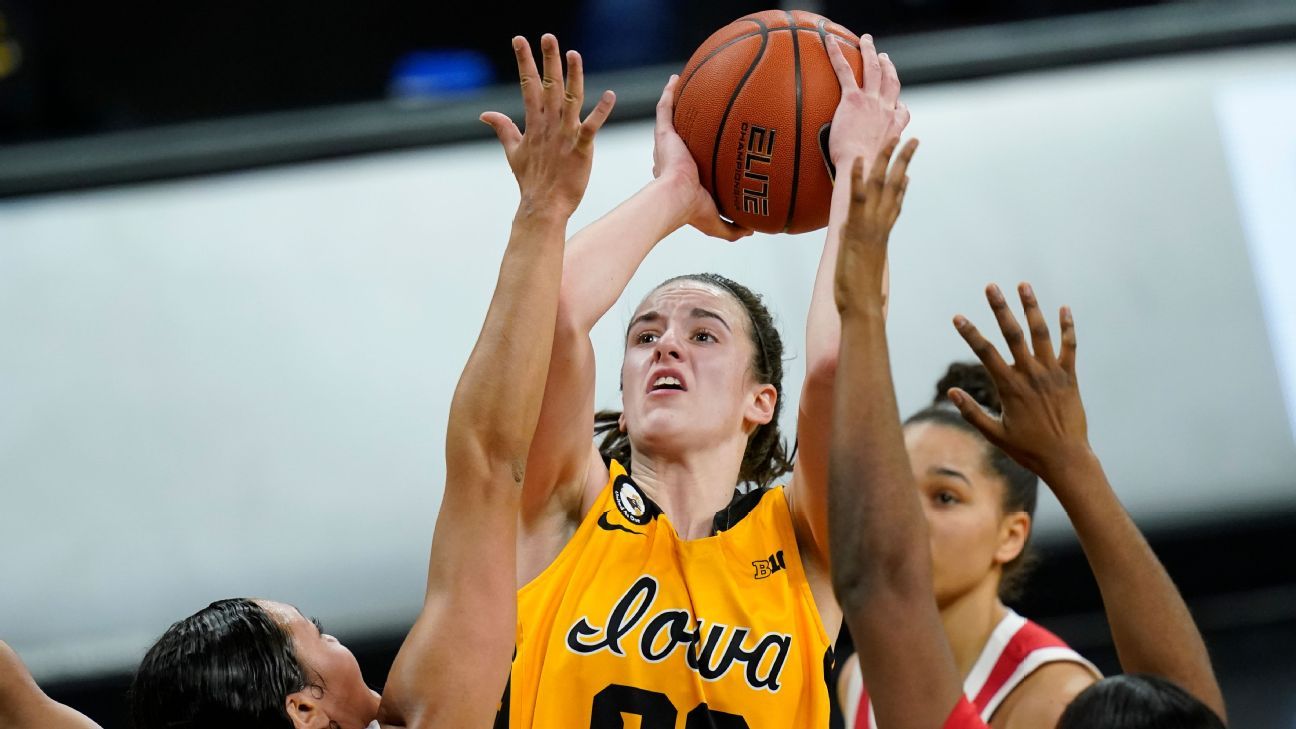 The most exciting player in the women's NCAA tournament, the River Walk debate and Final Four picks

Before Caitlin Clark makes her NCAA tournament debut, we tackle some final questions, including whether Baylor or UConn is the River Walk favorite.

www.espn.com
Reactions: cigaretteman
You must log in or register to reply here.

Caitlin Clark, Iowa’s savant of a point guard, is the biggest thrill in college basketball

Caitlin Clark, Iowa’s savant of a point guard, is the biggest thrill in college basketball