‘The right thing to do’: Why a Sioux warrior’s ceremonial items are leaving Nebraska museum, headed to his family in Florida

My apologies if this makes anyone feel uncomfortable:

ll she wanted, at first, was her great-grandfather’s birth date.
Nobody in Lilla Pearl Asmund’s family knew, and she’s been trying to teach her nieces and nephews more about their history.


Lilla Pearl Asmund
Courtesy photo
A few months ago at her kitchen counter in Naples, Florida, she entered his name in her laptop, hoping to find a census record. But when she scrolled through the search results, she saw photos of sacred and ceremonial Oglala objects, heirlooms that had been separated from her family for more than a century.
And they were in downtown Lincoln.
“I thought, ‘What is this?’” she said. “I looked at the pictures, and I thought, ‘That’s him.’ I was sort of shocked. And when I kept scrolling through, I saw these items. It was like, ‘Wow.’”


Her mother’s grandfather was a cousin to Crazy Horse. Joseph High Eagle was a warrior in his youth; as a teenager, he had fought in the Battle of the Little Bighorn. Later in life, he was considered a holy man on the Pine Ridge Indian Reservation, she said.


And sometime during the turn of the last century, a country doctor in northern Nebraska returned from his travels and unloaded his latest harvest — High Eagle’s eagle feather hand fan, two-piece clay pipe and beaded leggings.
Lincoln man remembers: 'I was the first guy that ever got shot by Starkweather'


Mysteries solved: Lincoln historian's research answers a family's desperate question
Dr. Charles F. Zimmerman added them to his growing collection, which filled every room in his Boyd County drugstore.
Three decades later, the 300-piece Zimmerman Collection — war bonnets, beaded bags, bows and arrows, hide scrapers, saddles and a skull — were carried across the state to Lincoln, displayed at the Historical Society’s museum on the first floor of the Capitol.

High Eagle’s items ultimately ended up at the museum’s new home at 15th and P streets, and then on History Nebraska’s website, and then — in October — on a computer screen in Florida.


And soon, they’ll be in his great-granddaughter’s hands.

High Eagle’s death in 1952 put him on the front page of newspapers around the country.
The Arizona Republic: “High Eagle was a brave of 19 in the camp of Chief Crazy Horse June 25, 1876, when the Sioux swooped down on General Custer.”
The Los Angeles Times: “High Eagle, who had survived the Indian Wars, died in a white man’s invention. He was riding in a car which overturned last night.”


Joseph High Eagle, taken around 1890.
History Nebraska
The Albuquerque (N.M.) Journal: “The old Indian lived in a cabin near Red Shirt village where the sorrowful notes of the (women) keening could be heard today.”


At the time, he was one of three remaining Native survivors of the Battle of the Little Bighorn, a distinction that brought him a measure of fame.

He was invited to reunions and anniversaries at the battlefield. He met movie stars when they vacationed in the Black Hills. He had roles in several Westerns, including “Custer’s Last Stand” and “Tomahawk.”
Before that, he’d served as an interpreter, on the reservation and at an annual Wild West show near St. Louis.
The newspapers reported High Eagle was 94 when he died, but even he didn’t know when he was born, the Gordon Journal reported in 1953.
The writer of that story — the son of a government interpreter who’d been stationed on the Pine Ridge Reservation — described meeting High Eagle and another Bighorn warrior in 1900 as a boy, when the two would visit his parents, trading conversation for coffee.
Watch now: 'An attractive nuisance' — Last house in Air Park has a date with demo
'A great turnout' -- Funeral home doesn't let Lincoln vet be buried alone


“I used to sit up into late hours just listening to their hair-raising, flesh-creeping stories of the two weather-beaten warriors,” he wrote.
In Florida, Asmund is trying to learn those stories, too.
She knows what she’s been told about her great-grandfather. That he was nearly blind toward the end of his life. That he was funny. That he spoke French. That he was married to Nellie. That he was a holy man, and gave the blessing at the dedication of the Crazy Horse Memorial.
And that he was a good man. “My grandmother loved him,” she said. 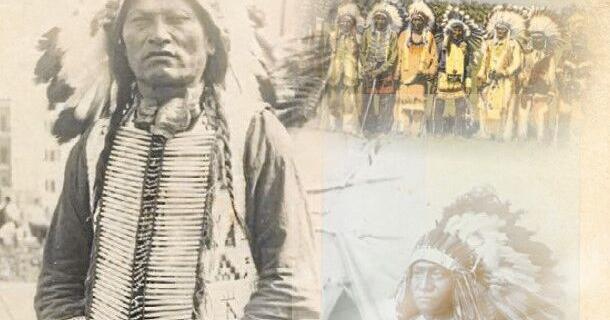 ‘The right thing to do’: Why a Sioux warrior’s ceremonial items are leaving Nebraska museum, headed to his family in Florida

It's not clear how Joseph White Eagle's leggings, clay pipe and eagle feather hand fan ended up with a Boyd County doctor a century ago.

Dr. Charles F. Zimmerman’s death in 1931 put him on the front page of the newspaper in Butte.
“Dr. Zimmerman’s main hobby was collecting Indian relics and curios, and as a result of his endeavors along this line for many years, he has collected one of the greatest collections of Indian goods not only in this section, but probably in the United States.”

The Indiana native had moved to Boyd County as a teenager with his parents in 1883, went to medical school and returned to set up a practice in Naper.
The young doctor was well-respected in the area. After a tornado ripped through Boyd County in 1901, the Nebraska State Journal reported: “He was the only physician present in all the trouble, and for two days and two nights he devoted his entire life to alleviating the distress of the injured.”
But he almost abandoned medicine a couple of years later, when he couldn’t save his own two toddler daughters, Fern and Marie, from illness.
He stayed, became a pharmacist, too, and opened a drugstore he ran with his wife, Mary. He also spent nearly 30 years working for the government, doctoring on nearby reservations — and adding to the collection that filled the building where he and Mary lived and worked.
His obituary in the Butte Gazette described it in detail. The entrance, stuffed with mounted animals, petrified bones and buffalo skulls. The living quarters, home to a large macaw captured in the jungles of Africa and brought to northern Nebraska.
“He is given the freedom of the house and struts around displaying his beautiful plumage.”

And the consultation room, with some 300 Native pieces gathered by the couple. “The collection is composed of dresses, skulls, beads and headwear of early Indian chiefs.”
One newspaper valued the collection at $10,000. Another described the doctor’s rarest piece — a medicine man’s regalia. According to superstition, the paper said, simply possessing it could bring dire results.
“The wife of the medicine man smuggled the outfit away from the tribe and hid it in the weeds, where the Zimmermans had arranged to pick it up after night had fallen.”


The Nebraska History Museum will return leggings and a pipe that belonged to Joseph High Eagle to his great-granddaughter.
GWYNETH ROBERTS, Journal Star
It’s not clear how, or when, the doctor acquired Joseph High Eagle’s fan, pipe and leggings. Asmund can picture her great-grandfather bartering for medical care, but she can’t be sure.
Charles Zimmerman died in 1931, and his services drew a crowd. “That he had been a true friend of the Indians is shown by the many Indians who attended the funeral,” the Butte paper reported.
Mary Zimmerman became a registered pharmacist to keep the store open. In 1934, she loaned the collection to the state Historical Society, which took permanent possession when she died five years later.

Rob Bozell had been an archaeologist with the state Historical Society — now History Nebraska — for six years when Congress passed the Native American Graves Protection and Repatriation Act, which established a process for the return of human remains, burial objects and cultural items.
The 1990 law applied to museums and federal agencies that received federal funds.
Bozell’s office took stock. Over the decades, it had collected the remains of 1,400 individuals, from full skeletons to single bones.
Repatriating the first 800 individuals was relatively easy; his office knew their tribal affiliations — almost all were Pawnee, though there were some Omaha, Ponca, Lakota, Cheyenne and members of other tribes.
It made an inventory, sent it to tribes and published it in the Federal Register, and began the process of returning the remains for reburial.
But it was still left with the remains of more than 600 individuals, and no idea where they should go.
“We knew they were Native American, but we couldn’t tell what tribe they belonged to. They were too old, there were no affiliated artifacts, no way of knowing which tribe.”
He came up with a plan. He consulted with 37 tribes that have, or had, some connection to what is now Nebraska. The tribes proposed the remaining unidentified remains be affiliated with all of them.


A closeup of the beadwork on leggings that belonged to Joseph High Eagle.
GWYNETH ROBERTS, Journal Star
The federal government and History Nebraska agreed, and on behalf of all the tribes, the Pawnee Nation of Oklahoma and the Iowa Tribe of Kansas and Nebraska have since reburied the next 600 sets of remains, including a skull from the Zimmerman collection.
Bozell retired as state archaeologist late last year, but he’s helping repatriate the remains of the last 30 individuals, many of which were uncovered during the floods of 2019.
His former office could be free of Native remains by this summer, he said.
The law also applied to sacred and cultural items, so the agency also sent summaries of the Native items in its collection to federally recognized tribes.
Since 1990, it has been asked to return only a handful of items to tribes and lineal descendants, said Trish Nelson, collections team leader, though the rate of requests has increased as the agency makes more of its collection searchable online.
It recently returned a medicine bundle to the Winnebago Tribe, for instance, and a trunk with medicine bundles to a descendant of its former owner.
After Asmund saw her great-grandfather’s items online and emailed History Nebraska in October, the agency followed procedure.


Joseph High Eagle (right), in a photo believed to have been taken around 1910.
History Nebraska
It removed the objects online. It asked for proof of her lineage, to see if she had a legitimate claim. It began filing paperwork with the National Park Service, which oversees the act. And it also contacted the Oglala Sioux Tribe, in part to check Asmund’s enrollment status, and in part to see if the tribe objected.
“We give them the story and ask what they think. Do they have any questions? Would they agree with this lineal descendant? The idea here is to talk to people who care the most about these objects in order to be informed about the decision that needs to be made.”
The tribe confirmed Asmund’s enrollment and information and had no objection to her claim, so History Nebraska published in the Federal Register last month its intent to return the objects, giving other descendants or tribes 30 days to make their own claims.
A month passed and no one came forward, so History Nebraska is now in the process of arranging the return of High Eagle’s items to his great-granddaughter.
The law worked as intended, Nelson said. “We’re proud to be part of the process. It’s the right thing to do.”

“Not the smartest decision a Florida boy could make”