Four people, including the former mayor of Iowa City, were rescued after being trapped when a grain bin filled with corn ruptured outside of Mount Vernon Friday morning.


Two men were setting up to unload the bin when a door opened and corn spilled out, burying both men. Two men who saw the spill stopped to help and also got trapped in the corn, according to a news release from the Linn County Sheriff’s Office.


Emergency responders were called to the scene at 1504 N. Highway 1 at 9:32 a.m. The two who tried to help — Shaun Lambertsen, 49, of Martelle, and Matt Hayek, 51, of Iowa City — were rescued first. The first two men who were trapped — Jared Youngblut, 37, of Lisbon, and Allen Mallie, 62, of Mount Vernon — were rescued soon after, according to the release.


Mallie, Lambertsen and Hayek were assessed by medical personnel at the scene and released. Youngblut was transported to a hospital with injuries not believed to be life threatening, officials said.


Hayek, who is the former mayor of Iowa City, said he doesn’t remember being rescued as much as asked to move out of the way.


“When I jumped onto the pile, I climbed up the ever-increasing, pouring pile of grain, up against the grain bin so that I could hold the edge of it, and then I started just digging frantically,” he said. “I stayed up there the whole time and did what I did up there so I could keep my head up and have something to hold onto.


“At one point, somebody handed me a piece of wood and I tried to wedge it, use that to divert the corn, and then I ultimately ended up using my body to shield him from the corn.”
Click to expand...


“After I don’t know how long, the first responders were there and they were taking over and I was told that they were going to try to pull one of the guys out, and they wanted me out of there, so I got out ... I don’t really remember. I think the guy helped me pull my leg a little bit, but I got myself up and out of there, maybe with a little bit of help.”


Hayek happened on the incident by coincidence. He was driving north on Highway 1 on his way to visit family in Wisconsin when he noticed someone flagging down traffic, looking for help. He pulled over and saw the grain bin and ran toward it.


Hayek said he saw a couple of men in the corn, and one was trying to dig the other out. He immediately began trying to divert corn away from the face of one of the men who was almost completely buried, trying to make sure he could breathe.


“At one point, somebody handed me a piece of wood and I tried to wedge it, use that to divert the corn, and then I ultimately ended up using my body to shield him from the corn,” Hayek said. “It was frantic, for everybody. You could hear somebody screaming, ‘I can’t breathe.’”


Hayek said after first responders arrived and he was separated from the corn, he collapsed with exhaustion and was eventually taken into an ambulance to be checked by EMTs. After he got out of the ambulance he said things had stabilized, and he spoke with a sheriff’s deputy, then got back in his car to keep driving north.


Highway 1 near Ellison Road, north of Mount Vernon, was closed to traffic Friday morning as emergency vehicles responded to the spill. The roadway has since reopened.


In January, Cedar Rapids and Swisher firefighters rescued a man who was trapped in a corn grain bin north of Swisher. He’d stepped in a cavity that gave way and sucked him downward into the corn. 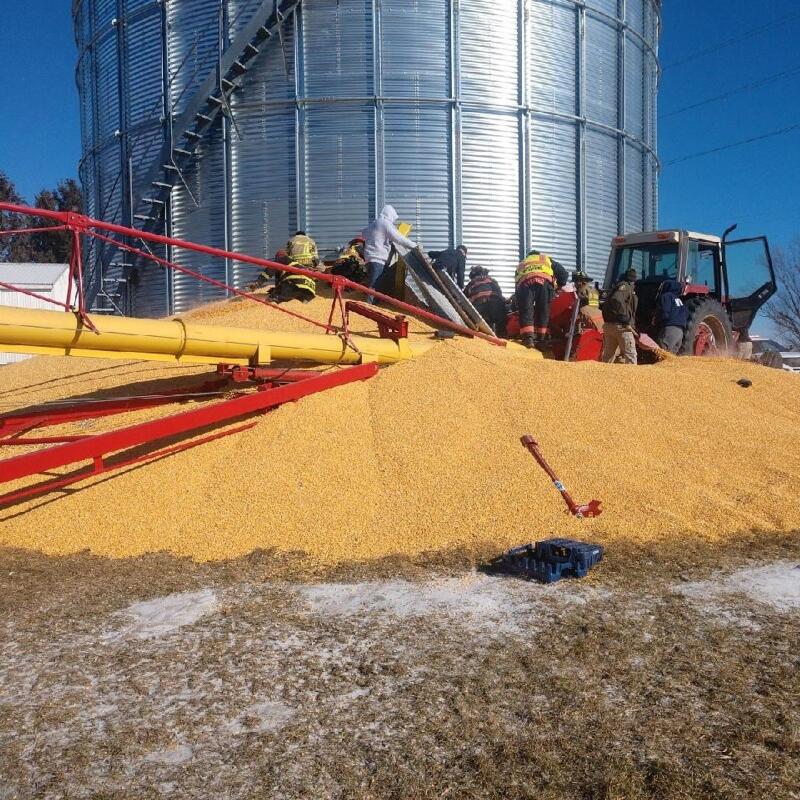 Four people were rescued after being trapped when a grain bin filled with corn ruptured outside of Mount Vernon Friday morning.

Matt’s a good dude. It’s not shocking in the least that he’d try and help.
Reactions: Hawk_4shur

lucas80 said:
Matt’s a good dude. It’s not shocking in the least that he’d try and help.
Click to expand...

They need to figure out a way to build those things with blow out hatches or something. Bins are widow makers.
You must log in or register to reply here.