A few weeks ago, it was reported that three residential properties were purchased by the city of Iowa City for a possible new passenger rail station on a route to Chicago, in the immediate vicinity of Oak Grove Park toward the south and east of downtown. In a local Reddit discussion about these purchases, /u/flunkysama commented, “I always thought it would be nice if they refurbished the old train depot. It's closer to downtown too. But I understand why they don't too. They would need a new siding track and it would block traffic.”

What this was in reference to is the old Rock Island Line station on Wright Street, which was in use for passenger rail operations beginning in 1898, replacing the town’s first depot from 1855. This station remained in service until 1970, when passenger rail service was initially discontinued to Iowa City. And as things turn out, /u/flunkysama was onto something — this old station was at one point in time considered for new passenger rail services, over a decade ago.

A document detailing proposed stations for a Chicago to Iowa City passenger rail service dating back to August 2010 describes an initial plan for the city’s station on this route to be established at the old Rock Island location on Wright Street. The building would be renovated, and a second track would be added to the path, as was the case for much of the 20th century. South Dubuque Street, at the grade crossing, would be closed to make way for a 600-foot platform. This was to be achieved by the City of Iowa City purchasing the old Rock Island station from its current private owners for $700,000 (it is currently used as offices). Adjusted for inflation, this would come out to approximately $953,000, compared to the property’s current assessed value of $748,610. The total appraised values of the homes City Council actually approved for purchase is $507,000.

With $230 million in federal funding secured under Democratic Gov. Chet Culver in October 2010, it was once imagined that passenger trains would be cruising from Iowa City to Chicago by 2015. But these plans never came to be. Changes in government at both the state and federal levels since then — to Republicans Terry Branstad and Donald Trump, respectively — resulted in federal funds being pulled and state support for passenger rail being reduced to feasibility studies. In the past, I have paraphrased documentation from the Federal Rail Administration, noting “that Iowa has withdrawn from regional rail planning groups for political reasons, and has been reluctant to commit funding in order to implement plans” compared to neighboring Illinois, Wisconsin, and Missouri.“

This would remain as a curious piece of local trivia if it wasn’t indicative of the bleak prospects for expanded passenger rail service in the state of Iowa. The existence of well over a decade of substantial planning for a train from Chicago to Iowa City, still with nothing to show for it aside from a plethora of news articles and government reports, leaves these old station plans as just another artifact of hopeful thinking gone by the wayside, of dreams deferred for half-decent infrastructure in the state of Iowa.

Legend has it that it took a little more than two years for the first railroad to be built through Iowa City, breaking ground in Davenport on Sept. 1, 1853, and resulting in the first train entering Iowa City on Jan. 3, 1856. It has now been more than 12 years since Gov. Culver’s initial announcement in 2010, with Amtrak’s current planning for a Chicago-Iowa City route extending another 13 years, to 2035. Even with greater technology, 3 million more people, and most of the tracks already laid, Iowans’ imagination for intercity public transportation is now narrower and anemic than it was more than 150 years ago.

I have no strong opinion as to whether an Iowa City passenger rail station is established at Wright Street or by Oak Grove Park; only that after over a decade of consternation and hemming and hawing, that a regularly scheduled passenger train does indeed arrive in Iowa City soon once again. Every year left waiting only adds costs and complexity to a project which should have been completed years ago.

However, if the past years in Iowan governance have taught us anything, it is that a degree of cynicism is usually warranted. Just like the plans which once existed in 2010, there still is plenty of time for these new intentions to go awry too. Next time I will take a look at some potential uses for this publicly-owned land if station plans change, or are put on hold yet again. 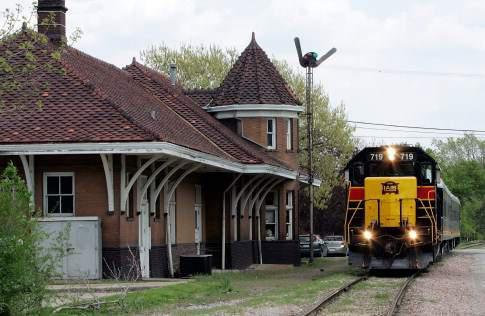 It'll never happen. Kimmy doesn't want any trade with Illinois. Rs will kill any idea of a connection by fear mongering that black people will come here for crime and the local idiots will eat it up.
Reactions: cigaretteman
You must log in or register to reply here.