Oh they did stop for a couple days out of respect....
For our non Florida residents, Charter Schools are still publicly funded.... 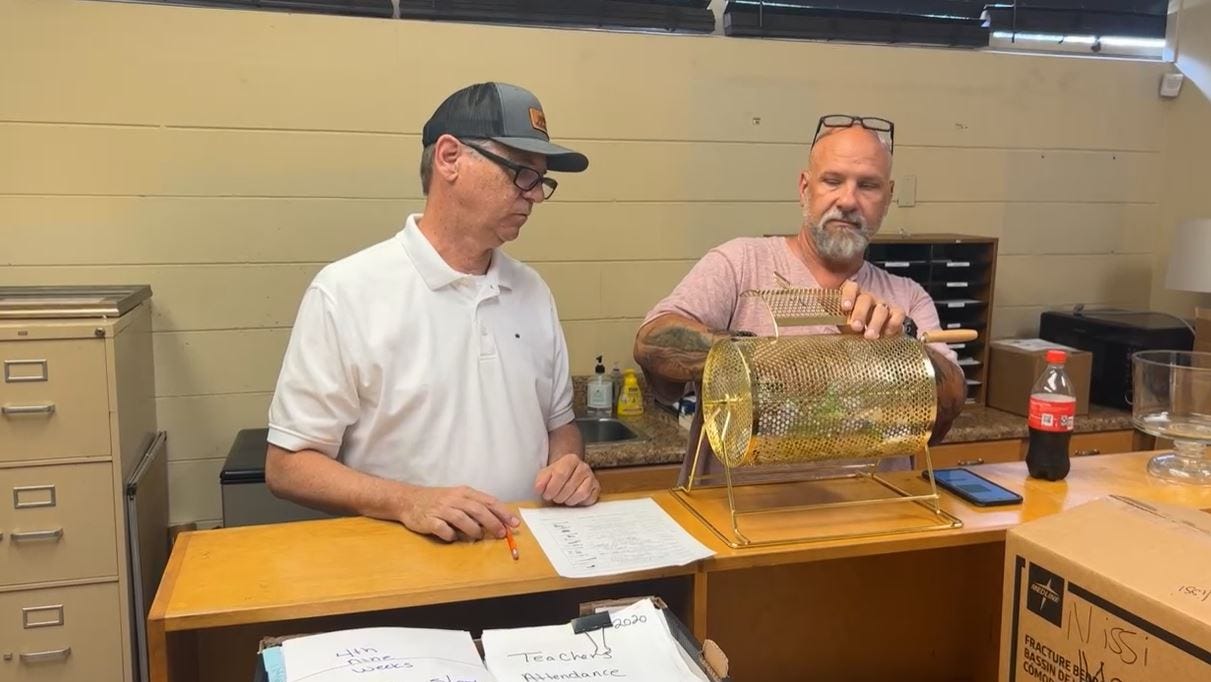 'It's all about the kids': Florida high school raffles off rifles, handguns

The fundraiser raffled off rifles, along with fishing gear; one critic said it underscored the need for background checks.
www.tallahassee.com

'It's all about the kids': Florida high school raffles off rifles, handguns​

A Florida high school raffled off guns and other weaponry through a month-long fundraising campaign that ended Wednesday.

James Madison Preparatory High School in Madison, a charter school, raffled off fishing and hunting gear and firearms, including handguns and semi-automatic rifles, in a $100-per-ticket raffle that started May 2.

"Giveaways like this emphasize the need for background checks on all gun sales and transfers," said Nancy Fry, a volunteer for the Florida chapter of Moms Demand Action in Broward County.

The flyer for the raffle does not say whether the school would conduct background checks on the winners.

"This giveaway does not promote safe gun ownership, which should go hand in hand with hunting and with sport shooting," Fry said. "This is just an unnecessary abdication of a school’s duty to keep their students and community safe."

Instead, in a video clip apparently from the raffle that was posted on Tuesday on the school's Facebook page, two men spin a tumbler full of paper slips while lauding the prizes in the raffle.

The school did take a short break from the raffle after the mass shooting at an elementary school in Uvalde, Texas that left 19 children and two adults dead.

"Out of respect for these tragic events, we will not have a raffle drawing this morning. We will resume raffle drawings on Tuesday, May 31. God bless each of you and your families," wrote principal Mark Akerman in a Facebook post dated May 25. 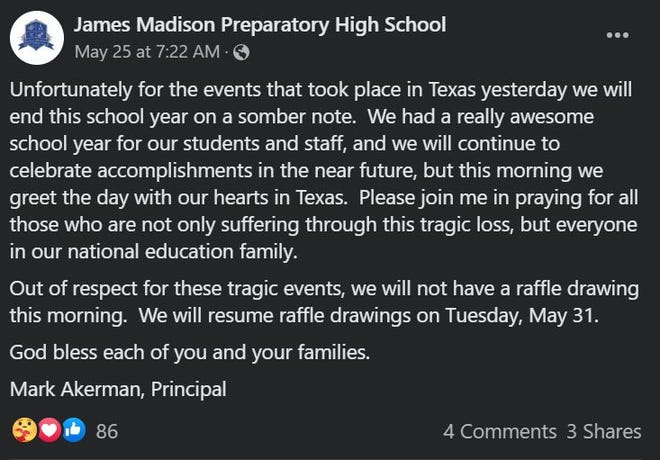 In the video posted, two men and another behind the camera comment on the giveaways as they are raffled off in what looks like a school office.

"Every country boy needs this under the front seat of his truck," says the man on the left, describing a Taurus Judge stainless 45, a revolver, also known as a snake gun.

Next to be raffled was a Glock 43X.

"This is the Joe Biden 9 millimeter," says the man on the left in the video. The other men laugh.

"Might be banned before too long," says White, the assistant principal, as he's reaching in for a paper slip.

"You better hide this one under your bed," says the man on the left.

The raffle also included an VSKA Tactical AK 47, a crossbow and a fish finder.

The grand prize giveaway, a Browning A5 Sweet Sixteen, a semi-automatic shotgun, was raffled off Wednesday at noon.

"It's all about the kids," White said on another video posted Wednesday.

The flyer for the raffle, called the 2022 Outdoor May Madness, states the proceeds benefit the high school. It did not provide details on how the proceeds would be allocated.

The flyer also stated entrants "Must meet all federal and state regulations."

Madison, Florida is located in Madison County, east of the state capital in Tallahassee. The county, which borders Georgia, has a population of a little over 18,000, according to the United States Census Bureau.

James Madison Preparatory High School principal Mark Akerman said in an email Wednesday evening that the raffle items were owned by a local sporting goods store where winners were required to meet all state and federal requirements, which included background checks.

None of the raffle items were ever on school property, Akerman wrote. Winners had to go to the store to pick up their items.

"We take school safety extremely seriously at James Madison. Since its inception, the safety and security of our students and staff has always been our priority," he wrote in the email.

The fundraiser has previously helped the school buy interactive boards and laptops, he added.
Reactions: BelemNole and cigaretteman

I love drinking pepsi at raffles.

This school is out in the sticks where hunting and fishing are considered normal activities.
Reactions: noleclone2
You must log in or register to reply here.