Not that it will matter now that the government will have no power to enforce laws, and unelected Supreme Court Justices rule our nation:

President Joe Biden said Thursday that the Supreme Court's decision ending a constitutional right to abortion is "destabilizing," but he maintained the ruling does not affect U.S. standing on the world stage as he took credit for modernizing the transatlantic alliance to adapt to new threats from Russia and China.
Biden was speaking to reporters at the conclusion of a five-day foreign trip to huddle with NATO allies in Madrid and the leaders of the Group of Seven advanced democratic economies in the Bavarian Alps, which came as the nation was still grappling with the fallout from Friday's Supreme Court decision.
"America is better positioned to lead the world than we ever have been," Biden said. "But one thing that has been destabilizing is the outrageous behavior of the Supreme Court of United States in overruling not only Roe v. Wade, but essentially challenging the right to privacy."


He added: "I could understand why the American people are frustrated because of what the Supreme Court did."


Biden said he would support changing the Senate filibuster rules, which require 60 votes to pass most legislation, to allow bringing a bill extending nationwide abortion protections to pass by simple majority, although Democrats don't have sufficient votes in the Senate for that.
The three-day NATO summit included the Biden administration announcing plans to permanently bolster the U.S. military presence in Europe, an agreement between Turkey, Finland and Sweden to pave the way for the accession of Nordic nations into NATO, and the alliance updating its strategic concept reflect that China's "coercive policies" are a challenge the Western bloc's interests.


"I think we can all agree that this has been a historic NATO Summit," Biden said.
He noted the last time NATO updated what is essentially its mission statement was 12 years ago, when Russia was characterized as a partner, and the document didn't even mention China. The new document hammered out at the summit changes that.
"The world has changed, changed a great deal since then," Biden said. "This summit was about strengthening our alliances, meeting the challenges of our world as it is a day, and the threats we're going to face in the future," Biden said.

Biden also highlighted announcements at the G-7 meeting, including more economic and military assistance to Ukraine as it aims to beat back Russia's four-month invasion, and announcements on tougher sanctions meant to punish Moscow. 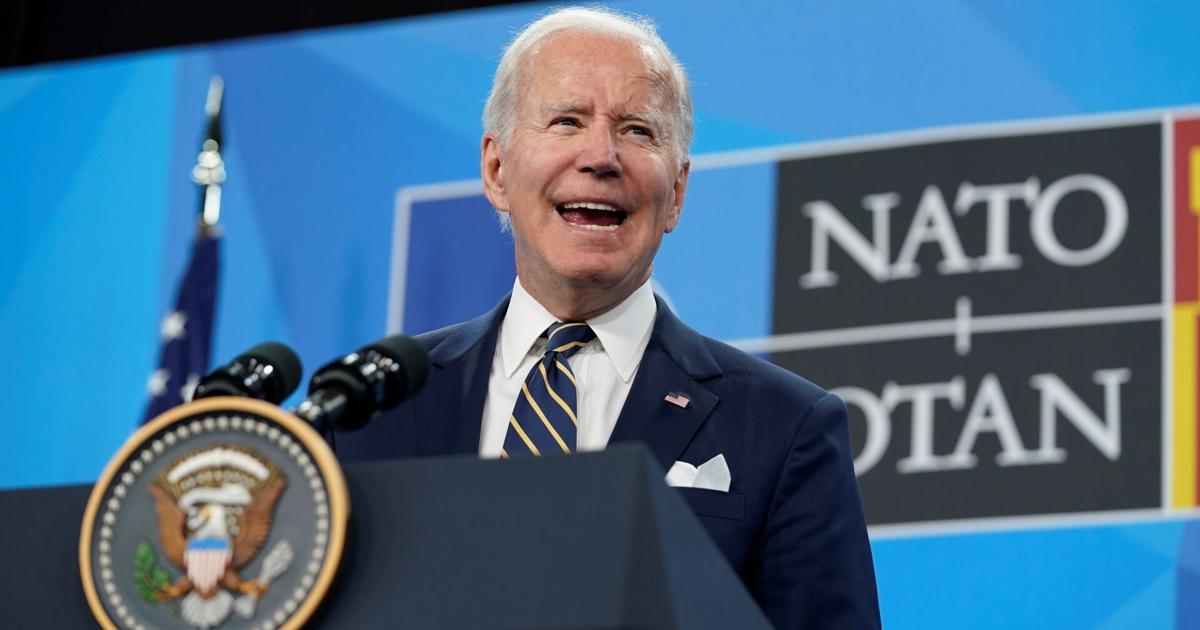 Manchin I believe is pro-life so you've already lost. Only way you could pass anything would be to eliminate the filibuster and try to negotiate with Collins and Murkowski on the details. Seeming how they voted Nay on the previous bill, doesn't look like you would be able to pass "Protect abortion right up til birth"

Not only that such a move would basically let the Republicans pass a nationwide ban when they take back power.

But go ahead and do it and then abortion will be banned nationwide in about 2 and a half years.
T

Manchin I believe is pro-life so you've already lost.

Not only that such a move would basically let the Republicans pass a nationwide ban when they take back power.
Click to expand...

Titanhawk2 said:
And any SCOTUS should knock down either of those because I doubt Congress has the right to trump the state's power to regulate this
Click to expand...

Possibly. . . the fed has ways of creating nationwide state laws through federal funding. They did that to make the drinking age 21 nationwide.

That having been said abortion is much more of an emotionally charged issue than the drinking age so some states would still likely tell the Fed to go to hell.

But regardless it's a losing issue. They don't have the numbers to win (at least the way they want to win) right now even without the filibuster. And then when the Republicans take back power there is a good chance that they would have the power to score a win in this area.

If the Dems Strengthen their Hold On the Senate, Will They Ditch the Filibuster?

Opinion Biden has been granted a new lease on life