Big changes are expected next spring when the long-awaited overhaul of the Interstate 80 and First Avenue interchange in Coralville begins.


The $41 million project will impact traffic starting early next spring when First Avenue is reduced to one lane in each direction over the interstate, with work continuing into 2024.


The current interchange — exit 242 — is a traditional diamond interchange that dates to the 1960s when I-80 was built across Iowa. The city and state have been discussing updating the interchange for nearly 20 years.

The interchange will be converted to a diverging diamond interchange, a design relatively new to Iowa but common in other states, such as Missouri, said Coralville City Engineer Scott Larson.


The nation’s first diverging diamond interchange was built in 2009 in Springfield, Mo. More than 150 of the interchanges are now in use around the country.


Interstate 380 will have two diverging diamond intersections added in Cedar Rapids — at Tower Terrace Road and at Boyson Road, according to the Iowa Department of Transportation.


Among the benefits are increasing left-turn lane capacity and having lanes designated for left and right turns.

"The left-turn movement that would normally be waiting for a green arrow or generally clogging up traffic as people are trying to find a gap to be able to turn left through oncoming traffic, that left-turning volume is now essentially given a ‘free’ left onto the interstate,“ Larson said.


The Iowa DOT has a video online of how to drive through a diverging diamond interchange.


“Drivers have been shown to adjust safely to a new (diverging diamond interchange) with thoughtful placement of signage, barriers and pavement markings,” Cutler said in an email.


Half of the project’s cost is funded by a $20.5 million BUILD grant from the U.S. Department of Transportation. The other half comes from the Iowa DOT’s budget.


Cutler said drivers may see some construction work on the interchange yet this year.


But the main impact comes in 2023 and 2024 with lane reductions on First Avenue over the interstate, Larson said.


“Having that extra access point will be helpful,” he said.


The new interchange also will include three underpass tunnels and a bridge over I-80 for bikers and pedestrians.


Larson said he believes that design will be unique to Iowa’s diverging diamond interchanges since most bike paths are at-grade and involve crosswalks at traffic signals.


“We were able to work with the DOT to take the bike path completely out of conflict with vehicle traffic,” Larson said. “We just thought that was really critical because the time involved sometimes to move pedestrians through a really large intersection can be substantial.”


Cutler said the interchange will be safer for pedestrians because there is no at-grade crossing. 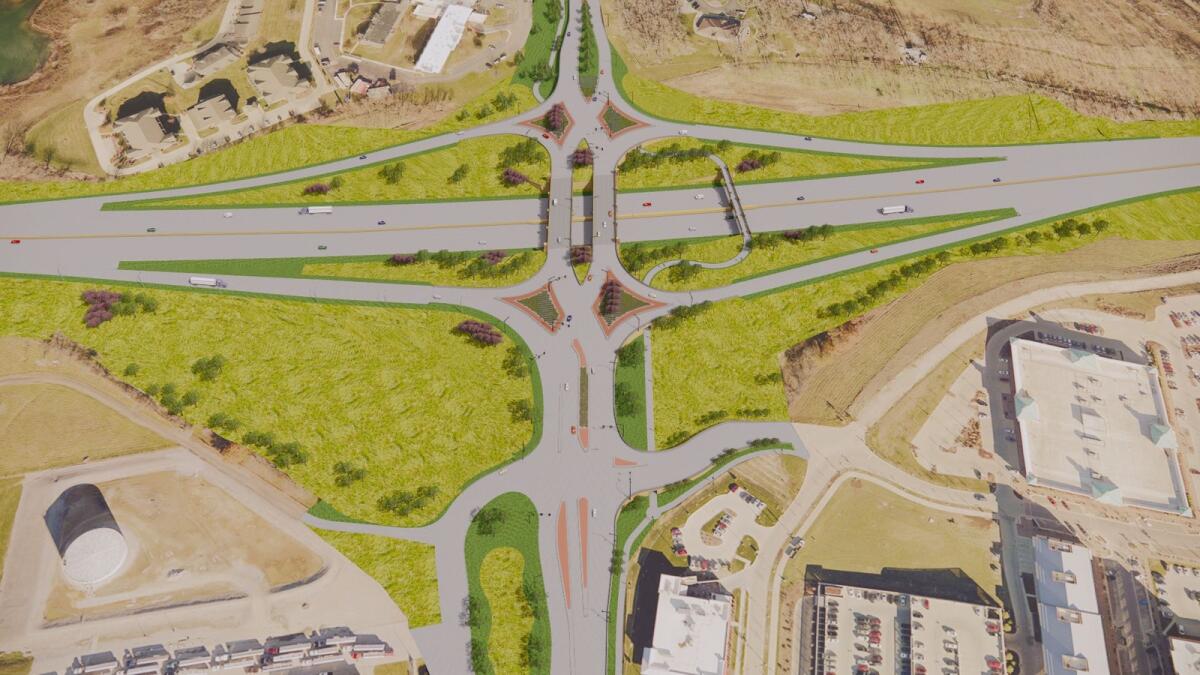 Big changes are expected next spring as the long-awaited overhaul of the interchange at Interstate 80 and First Avenue in Coralville is slated to begin. The $41 million project will convert the interchange to a diverging diamond interchange.

www.thegazette.com
Reactions: Phenomenally Frantastic
You must log in or register to reply here.

DOT officials moving forward with plans to reconfigure the I-80 / 1st Avenue interchange in Coralville.