In the wake of his “Partygate” scandal and skyrocketing cost of living, the 54 Conservative Party parliamentarians required to trigger a confidence vote have asked for one.

Johnson will address his party at 10:00am Central time today and then a secret vote will be held at noon. If a simple majority vote against him then he will be out as Prime Minister.
H

It's too bad because he was the face of the West in his assistance to Ukraine early on. Interesting to see what comes of this.

Update (not that anyone seems to care) - the voting has closed and an announcement will be made in one hour.
Reactions: cigaretteman

He's a clown, has been from day one. I used to wonder how someone like that could be elected, but after Trump, nothing surprises me.
Reactions: cigaretteman 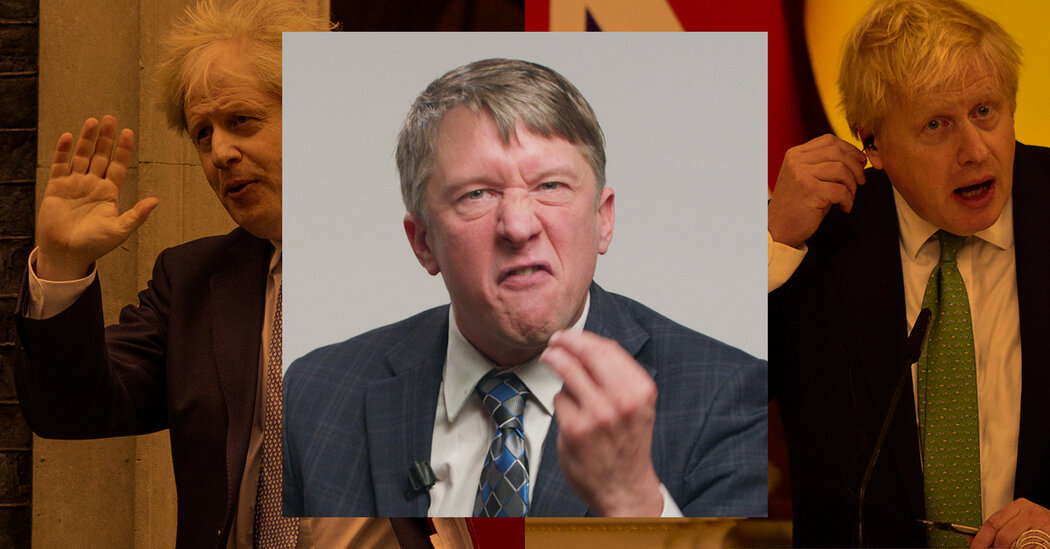 To help make sense of the scandal surrounding Britain’s prime minister, we enlisted the help of satirical newscaster, Jonathan Pie.

British Prime Minister Boris Johnson survived a cliffhanger vote of no confidence by his fellow Conservative Party lawmakers Monday evening, prevailing despite deep disgust over lockdown-breaking parties at Downing Street and broad discontent with his leadership, which one former ally branded a “charade.”
Are you on Telegram? Subscribe to our channel for the latest updates on Russia's war in Ukraine.
Johnson won the party-only secret balloting by 211 to 148 — surpassing the simple majority of 180 votes he needed to remain in office. Though he held on to his job, the vote was remarkably close for a prime minister who helped the Conservatives win a landslide election in 2019.
His salvation may have been the lack of an obvious successor within the party.
Johnson had framed the vote as “a golden chance” to “end the media’s favorite obsession” with the boozy pandemic gatherings at his offices. And when the result was tallied, he told broadcasters it was “convincing” and “decisive” and allowed the Tories to “move on” and “focus on the stuff that I think really matters to people.”
ADVERTISING
But there remains an active open rebellion within his party, with many top voices now on-the-record saying this prime minister is unfit to serve. Fellow Conservative Party lawmakers have questioned his truthfulness and complained that his administration is reactive and adrift.
How Johnson proceeds with his domestic and foreign agenda is unclear. Though he can fight another day, he is a wounded leader. He and the Conservatives will struggle to rebuild their brand in the face of soaring inflation and diminished public trust. And allies in Europe and the United States are now on notice that his authority has been undercut by his own doing.
Surviving a no-confidence vote under the current rules insulates Johnson from additional party challenges for a year. But those rules can be changed.
Looming over Monday’s vote was the recollection that Johnson’s predecessor, Theresa May, beat a no-confidence challenge over her failed Brexit deal in 2018, only to be forced to resign the next year. When May faced her vote, 37 percent of her lawmakers voted against her; Johnson did worse, with 41 percent of his lawmakers voting against him.
How Boris Johnson went from landslide victory to no-confidence vote
In opinion surveys, Johnson’s polling numbers are in the dumpster after months of drip-drip revelations about how he allowed his staff to turn his office and residence of 10 Downing Street into an ersatz frat house during the darkest days of the pandemic — with “BYOB” party invites, karaoke singing, fisticuffs and vomiting.
After Johnson made it through the no-confidence vote, the leader of the opposition Labour Party, Keir Starmer pounced, tweeting to voters that the “divided Tories propping up Boris Johnson” will have “no plan to tackle the issues you are facing.”
Johnson was booed by some when he attended a jubilee service on Friday at St. Paul’s Cathedral.

In a scathing letter posted Monday on social media, lawmaker Jesse Norman, a former Johnson ally, said the prime minister had presided over a “a culture of casual lawbreaking” at Downing Street.
He added that his frustration extended beyond the scandal, calling Johnson’s policy priorities “deeply questionable.” He mentioned the government’s plan to send some asylum seekers to Rwanda and its threat to violate the Northern Ireland protocol negotiated as part of the Brexit deal.
“For you to prolong this charade by remaining in office not only insults the electorate, and the tens of thousands of people who support, volunteer, represent and campaign for our party,” he wrote. “it makes a decisive change of government at the next election more likely.”
From the prime minister’s defenders, the message on Monday was that Johnson had gotten “the big decisions right” — on Brexit, the pandemic, support for Ukraine — and apologized for his mistakes.
In a letter to Conservative lawmakers, Johnson acknowledged: “I have come under a great deal of fire, and I know that experience has been painful for the whole party.”
He added: “Some of that criticism has perhaps been fair, some less so.”
In a communication more focused on the public, Johnson on Monday tweeted a picture of himself on the phone with Ukrainian President Volodymyr Zelensky. “President [Zelensky] just updated me on the ongoing battle against Russian aggression in the Donbas.”
U.K. ‘Partygate’ report blames No. 10 for boozy lockdown parties
After the vote, Education Secretary Nadhim Zahawi told Sky News that Zelenskiy must be “punching the air” because his ally Johnson would stay on.


https://www.washingtonpost.com/world/2022/06/06/boris-johnson-tory-leadership-vote/
You must log in or register to reply here.

George Will: Donald Trump and Boris Johnson have much in common, with one vital, deflating difference

Boris Johnson Is Revealing Who He Really Is