Roe has been doctrine my entire life. When I graduated high school, the senior year photographs were included in a memory book. One of the pages invited us to imagine our careers and salary 10 years in the future. I predicted I would be a lawyer earning a very realistic $35,000 a year. I was not stupid. I knew that race and gender might make that much harder to achieve. It never occurred to me that I should temper my aspirations because I was a girl.
In one lifetime, Roe had pushed women so fully into the paid labor market that it was normal for high school seniors to be asked to answer a genderless prompt about their economic aspirations. Flipping through that book today feels like reading a fairy tale, the old Grimms’ ones and not the new Disney ones.
I grew up choosing where and how I work because Roe v. Wade gave me many of the same basic rights of personhood as men, for example. Millions of women have, to different degrees, been able to do the same.
Advertisement
Continue reading the main story


With Roe v. Wade toppled, we do not have the same rights in all labor markets. In a global market, an empowered worker is one who can migrate. With Dobbs, women cannot assume that we can safely work in Idaho the same way that we can in Oregon or Washington. I cannot negotiate wages or time off with an employer with the same risk profile as those who cannot become pregnant. An employer who offers lower pay in a state with abortion care indirectly benefits from women’s inability to take our labor on the open market across the nation. Thanks to a rogue court, women’s lives are now more determined by the accidents of our birth than they were a week ago.

Those accidents of birth include circumscribing women’s lives by making them dependent upon corporate beneficence. Some companies, including Dick’s Sporting Goods, immediately issued statements that they would offer reimbursements to employees for traveling for abortion services. The largess of Dick’s and other companies is noteworthy. But it requires women to disclose their health status to a boss they have to hope is well meaning. That says nothing of also hoping that corporate management or leadership does not change. Well-meaning employers can come and go. They also vary in how well meaning they are in terms of pledges of their employee support.
Months before the decision was officially handed down, Starbucks also issued a statement vowing support for employees who seek abortion care. But its statement adds that it cannot guarantee that benefit to workers in unionized stores. Union drives at Starbucks have increased worker power. Many of those workers are women and people who can become pregnant. Potentially attaching support for abortion care to nonunionized labor is a perfect example of why corporations should not be arbiters of human rights.
The majority opinion in Dobbs argues that it is merely making the right to an abortion a state’s decision. In reality, the justices are making it a corporation’s privilege. A society cannot be held together when half of a population has to rely so heavily on the kindness of strangers to do something as basic as work.
Economics, labor and jobs matter for more reasons than money. Jobs and income are the basic units of U.S. citizenship, in practice. Jobs are how we earn dignity. Income is one way we fund the state, through taxes and production. Jobs are also how the state provisions its responsibility to us, by relying on employers to deliver goods like health care and social security.

For only 58 years of the nation’s 246-year-old economy, women have been able to avail themselves — thanks to Title VII of the Civil Rights Act — of the full citizenship that we effectively purchase through our jobs. We have been able to migrate from the South to the North and the West, seeking better wages and more opportunity. Abortion access afforded women more and better economic opportunities, and those economic opportunities made women more viable in the eyes of the law. We have cobbled together economic opportunity, albeit for less pay than men, yes. But any paid work made us more free by making us more whole in the eyes of courts and institutions.

Today we pay a greater price for that freedom than do men. And it is a price that our children will inherit. Many of the people who celebrate the Dobbs decision are nostalgic for a pre-World War II American economy. That economy kept women from competing with men in the paid labor market. It also relied on unions to protect working-class men’s incomes. That economy is gone. This economy will not magically provide good jobs and good wages for men who will pass that on to their wives and children.
As a Black woman, I inherited the debts that white racism exacted upon the livelihoods of my grandparents and great-grandparents and their great-grandparents. I know well what that inheritance feels like. It makes your life poorer. It makes your communities poorer. And it dooms a society.
That we are all less free than we were on Thursday is, even by now, a cliché. But in fact that is more true for poor women and trans men than for others. Do not mistake the specific harm for localized harm. When women cannot move freely across this nation, sure that they have basic human rights as they migrate, we are all anchored to the poverty of their choices.
There are even worse days ahead. By all accounts, the overturning of Roe v. Wade is just the beginning of decisions that could reverse hard-won human rights for all Americans. Justice Clarence Thomas indicated that L.G.B.T.Q rights, birth control access and health care privacy may be in the court’s cross hairs.
I am still reeling from waking up in a new world. But that feeling cannot solidify into inertia. We can and should donate to organizations that provide abortion services in local communities. At the same time, donations will not save us. Consumer citizenship has trained us to think about our politics as a set of transactions that we can purchase like we do a car or a new pair of shoes. Restoring human rights will require direct political engagement and tremendous resistance. I am not particularly hopeful.
Justice Samuel Alito wrote the majority decision. Journalist Stephanie Mencimer wrote in Mother Jones that it was always “going to be Alito” who would write the majority decision. Alito says that the court cannot be concerned with how its decisions affect people. Linda Greenhouse in The Times described the opinion as arrogant. I expect arrogance from a conservative court. It is more important to me that the decision is so bold.
Advertisement
Continue reading the main story


This is a court unafraid of the electorate and unashamed of showing its hand. The emperor does not care that he wears no clothes. Nancy Pelosi reads a poem. President Biden issued a tepid commitment to women’s rights. No one seems afraid of the people. That is the people’s fault.

The fight now shifts to the states, where many legal scholars do not know how to interpret this new reality. Some states are struggling with who has what authority. Other states want to refuse to enact Dobbs’s dictates but do not know how. We should be there to determine what a life after Roe v. Wade will look like. It will be hard. Setbacks are certain. But there is no other way forward and so many ways backward. 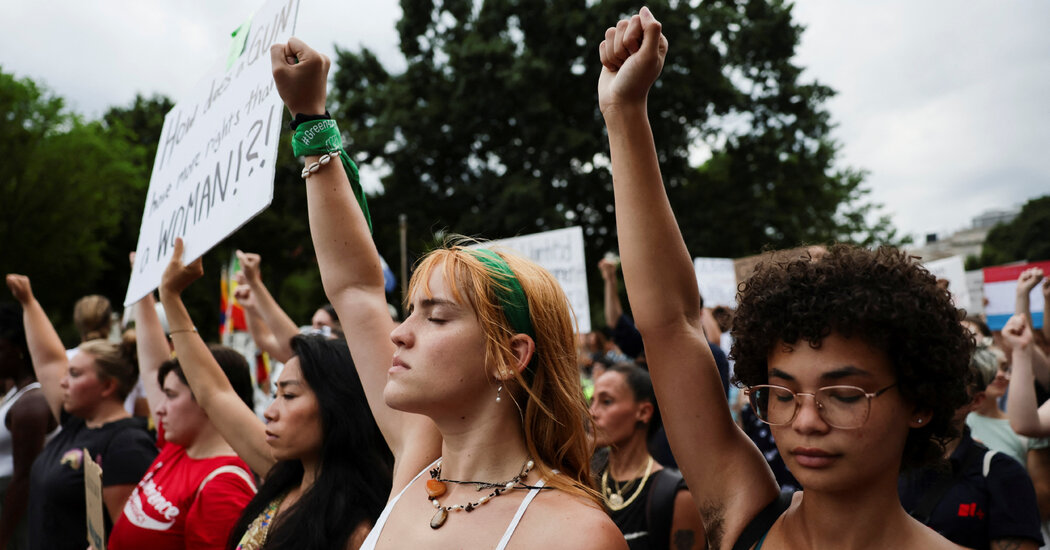 Women pay a greater price for freedom than do men.

Religious Doctrine, Not the Constitution, Drove the Dobbs Decision