Column: Liz Cheney must stop telling the truth or Kevin McCarthy will run her out of the Trumpub-LIE-can Party 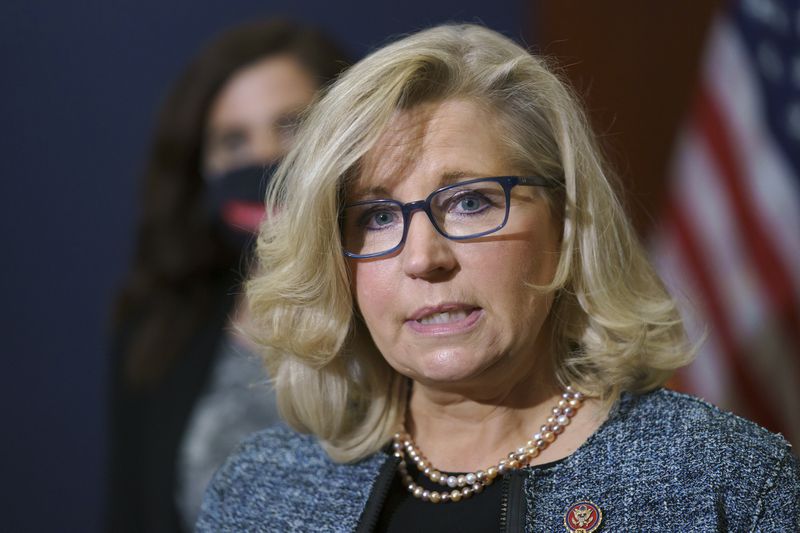 Republican Rep. Liz Cheney has committed the worst sin imaginable in today’s version of the GOP: She told the truth.

And now, in a real twist on the Bible’s long-standing stance on sinning, the Wyoming conservative and third highest-ranking Republican in the U.S. House, daughter of former Vice President Dick Cheney, will be punished for her lapse into honesty. So it goes in a political cult that may as well rebrand itself “the Trumpub-LIE-can Party.”

Unlike the vast majority of her supposedly conservative colleagues, Cheney has refused to dispute the results of the 2020 presidential election. That’s a logical stance, as there’s nothing to dispute. Joe Biden won, decisively, and Donald Trump lost. That has been confirmed by Republican and Democratic state leaders across the country and in every court where disputes were raised.

It’s a fact. Our democratic process worked as it was meant to, and believing otherwise is no less absurd than believing Big Foot is running Google.

Therein lies the problem. Four years of Trump’s reflexive dishonesty and ability to shamelessly point at something red and say it’s green turned most Republican politicians into volcanic absurdists, gasbags so untethered to the truth it’s a wonder they haven’t all floated into the stratosphere.

On Monday, Cheney tweeted this: “The 2020 presidential election was not stolen. Anyone who claims it was is spreading THE BIG LIE, turning their back on the rule of law, and poisoning our democratic system.”

There was a time when Republicans would have acknowledged a statement like that as fact and recognized that saying otherwise is a threat to the very core of our democracy. Now, such a statement is apostasy among the hyperbolic dishonesty sprinklers who make up the Trumpub-LIE-can Party.

The message? If the message is “We’ve all had our brains oatmeal-ized by unhinged propaganda coming from online conspiracy theorists, so now we’re a pro-insurrection party flirting with fascism,” then McCarthy is correct. Cheney would struggle to carry out that message.

And if the message is “We’re a masochistic cult of personality centered around a twice-impeached one-term president who hates us all and helped us lose the House, the Senate and the White House,” then McCarthy is again correct. Cheney is the wrong messenger.

But if your message in any way resembles “We’re a serious political party and not a pack of nattering ninnies in thrall to a racist Florida man with a Fabergé-egg-fragile ego,” then somebody over at GOP headquarters might want to listen to Cheney. (I never in a million years thought I would type the words “might want to listen to Cheney.” Look what these times have done to me!)

It seems clear, unfortunately, that the latter message is not what the Trumpub-LIE-can Party is after. And so Cheney is expected to be voted out as House GOP conference chair as early as next week, a conservative stalwart pounced on by a pack of rabid nutballs who care more about their next Fox News appearances than they do about the country.

Cheney has consistently been one of the few Republicans with the ovaries to stand up to Trump. She was one of 10 House Republicans who voted to impeach the former president for inciting the Jan. 6 attack on the U.S. Capitol, which grew out of Trump’s false claims of a stolen election.

At recent party meeting, Cheney said: “We can’t embrace the notion the election is stolen. It’s a poison in the bloodstream of our democracy.”

But the Trumpub-LIE-cans LOVE that poison. Listen to Debra Ell, a Republican organizer in Michigan, telling the Washington Post why she’s convinced the 2020 election was stolen from Trump: “I think I speak for many people in that Trump has never actually been wrong, and so we’ve learned to trust when he says something, that he’s not just going to spew something out there that’s wrong and not verified.”

Trump has never actually been wrong? Imagine thinking that.

Two recent polls, one from CBS News and one from CNN, found that 70% of Republicans don’t believe Biden legitimately won the election. Pardon the all-caps emphasis, but THAT IS INSANE!!

The idea of telling a big lie and repeating it over and over until people believe it, until it becomes so ubiquitous people assume it must be true, is a tactic used by some of history’s most vile figures. And it was used because it worked.

It’s working again, as evidenced by the broad acceptance of a big, outrageous lie among Trumpub-LIE-can voters.

Cheney refuses to give in to that lie. She recognizes the danger it presents, and she’s banking on being a person who can rise from the ashes after the party burns up in the flames of its own hysterical nonsense.

But first, she’ll pay the price for committing a crime against Trumpub-LIE-cans in good standing: Telling the truth, and showing the world how dangerously bonkers most of them have become. Column: Liz Cheney must stop telling the truth or Kevin McCarthy will run her out of the Trumpub-LIE-can Party

Republican Rep. Liz Cheney has committed the worst sin imaginable in today’s Trump-led version of the GOP: She told the truth.

Kevin McCarthy doesn’t have to do anything. Wyoming is Trump Country. Cheney will lose the primary biggly.
Reactions: ThorneStockton

KFSuperStar said:
Kevin McCarthy doesn’t have to do anything. Wyoming is Trump Country. Cheney will lose the primary biggly.
Click to expand...

Is there a more stinging insult than being called Trump Country? Yikes.
Reactions: cigaretteman, Chishawk1425 and Torg

KFSuperStar said:
Kevin McCarthy doesn’t have to do anything. Wyoming is Trump Country. Cheney will lose the primary biggly.
Click to expand...

It would not surprise me at all. Wyoming folks are largely clueless and the state has very little value economically, socially or politically. The are the very definition of flyover country. Matt Gaetz could win in Wyoming, FFS.
You must log in or register to reply here.

WaPo Editorial: Liz Cheney told the truth. Republicans must decide whether they value Trump over it.

The Daily 202: What does Liz Cheney want?