In June, two American veterans fighting as volunteers in Ukraine, Alex Drueke and Andy Tai Ngoc Huynh, were captured by Russian forces. They were taken to a black site where they were beaten, run into walls with bags over their heads and hooked up to a car battery and “electrocuted,” the men said after being freed in late September.
Between beatings, they told The New York Times, they were interviewed on Russian media outlets, including RT, one of the Kremlin’s primary propaganda organs in the West.
“They stayed away from our faces because they knew that we were going to be on camera, that they were going to try and use this for propaganda.,” Mr. Drueke said. “So they wanted our faces to look OK. But they took care of our bodies pretty good.”
Advertisement
Continue reading the main story


RT had been largely taken off the air in the United States and banned by the European Union in March after Russian President Vladimir V. Putin’s armies invaded Ukraine. But in June, its version of the captives’ story appeared on Rumble, a video-sharing platform that stepped in this year and began carrying RT’s live feed, in addition to its clips. There, a glum-looking Mr. Huynh says they joined the fight in Ukraine after being duped by “propaganda from the West” that “Russian forces were indiscriminately killing civilians.”
Rumble has become a leading destination for conservative content by positioning itself as a platform for unfettered speech, an alternative to the content moderation — or “censorship,” to many on the right — of mainstream social media sites like Facebook and Twitter. Last year, Rumble received a major investment from a venture capital firm co-founded by J.D. Vance, the Republican Senate candidate in Ohio. The firm, Narya Capital, got a seat on Rumble’s board, and its more than seven million shares place it among the company’s top 10 shareholders, according to securities filings. Mr. Vance also took a personal Rumble stake worth between $100,000 and $250,000, his financial disclosures show.
Narya is backed by the prime patron of Mr. Vance’s Senate campaign, the billionaire venture capitalist Peter Thiel. And it was Mr. Thiel who played a leading role in Narya’s Rumble investment last year, becoming what the platform’s chief executive described as its first outside investor.

The investment fits into an enduring narrative of Mr. Thiel, who has expressed skepticism of democracy and advocated keeping the airwaves open for hard-right voices since his student days at Stanford. It also helps illuminate the relationship between Mr. Vance and Mr. Thiel, who mentored the candidate in his Silicon Valley business empire and has contributed more than $15 million to his campaign and affiliated political action committees. (Mr. Thiel has contributed another $15 million to support the candidacy of another protégé, the Republican Senate candidate in Arizona, Blake Masters.)
Asked about Rumble’s hosting of RT, the Vance campaign issued a statement. “J.D. does not play an active role at Rumble, nor does he set Rumble’s content moderation policies,” the campaign said. “It’s a dishonest straw man to suggest that just because someone believes in free speech rights online that they also personally endorse that speech. It’s embarrassing that an industry like the media, which relies on the First Amendment, has so much trouble comprehending that.” Mr. Thiel’s spokesman did not comment. 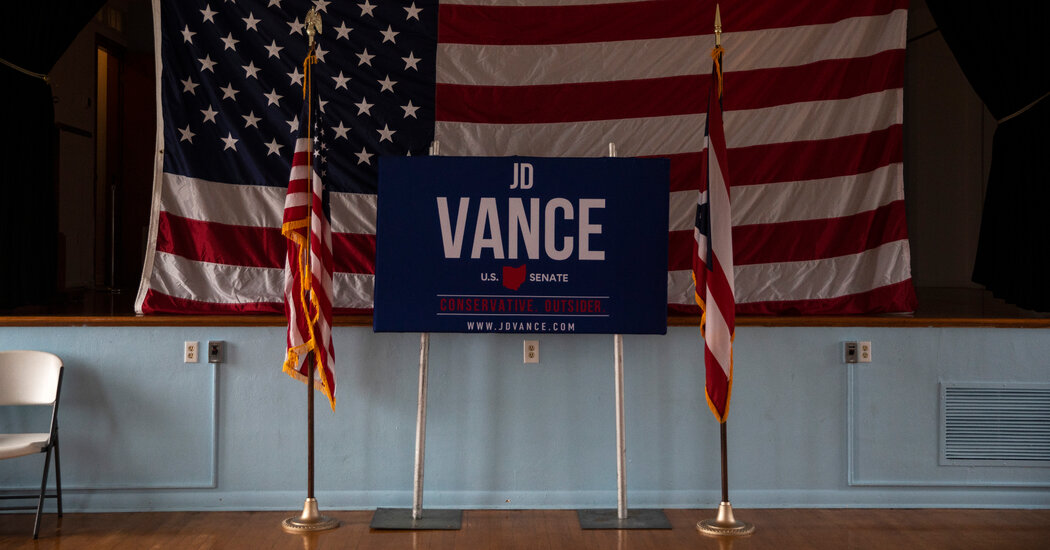 An interview of captive Americans done “under duress” appears on a web platform backed by J.D. Vance and Peter Thiel.

Sen. Vance circulates letter that could be GOP’s first test on Ukraine