...the Department of Justice requested that the first defendant from the January 6 insurrection to be convicted at trial, Guy Reffitt, be sentenced to 15 years in prison. This is an upward adjustment of sentencing guidelines because the department is asking the judge to consider Reffitt’s actions as terrorism, since the offense for which he was convicted “was calculated to influence or affect the conduct of government by intimidation or coercion, or to retaliate against government conduct.”

Reffitt was a leader of the Texas Three Percenters militia gang, which calls for “rebellion” against the federal government. He came to Washington, D.C., for January 6. He attacked U.S. Capitol Police officers and encouraged others to do so before entering the Capitol armed with a handgun, where he targeted House Speaker Nancy Pelosi (D-CA) and then–Senate majority leader Mitch McConnell (R-KY).

A camera on his helmet recorded Reffitt’s words that day. “I’m taking the Capitol with everybody f*cking else,” Reffitt told the people around him. “We’re all going to drag them m*therf*ckers out kicking and screaming. I don’t give a sh*t. I just want to see Pelosi’s head hit every f*cking stair on the way out. (Inaudible) F*ck yeah. And Mitch McConnell too. F*ck ‘em all. They f*cked us too many g*dd*mn years for too f*cking long. It’s time to take our country back. I think everybody’s on the same d*mn wavelength. And I think we have the numbers to make it happen…. [W]e’ve got a f*cking president. We don’t need much more. We just get rid of them m*therf*ckers and start over.”

Afterward, he boasted, “We took the Capital [sic] of the United States of America and we will do it again.”

Back in Texas, Reffitt deleted a thread of messages between him and another planner—the FBI was able to recover it—and threatened to hurt his teenaged children if they reported him. Reffitt has a history of domestic violence, including threatening his wife with a gun.

The hefty sentence request for Reffitt is likely to convince others implicated in the insurrection to cooperate. 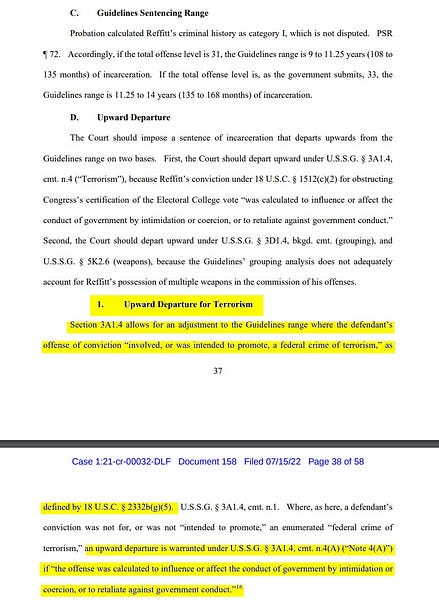 A late news dump tonight: the House Select Committee to Investigate the January 6th Attack on the U.S. Capitol has subpoenaed from the U.S. Secret Service (USSS) the text messages between agents on January 5 and January 6, 2021, that it learned Wednesday had been deleted. Chair Bennie Thompson...

heathercoxrichardson.substack.com
Reactions: Howard Roarkes Ghost, Torg and TheCainer
You must log in or register to reply here.

Secret Service held onto Pelosi threat until after insurrection

The latest: Sen. Scott (Fla.) votes ‘no’ on bill including $2 billion in disaster relief