Democrats, This Is How to Stop the Republicans From Taking Back Congress

By Josh Marshall
Mr. Marshall has covered politics and elections for 25 years.
Democrats hope to make November’s midterm elections a referendum on Roe v. Wade, the linchpin decision upholding abortion rights, which the Supreme Court is almost certain to strike down this summer. That strategy makes sense. Polls show that roughly two in three Americans oppose overturning Roe and almost 60 percent support passing a bill to set Roe’s protections in a federal law. What’s more, polls showed a rising number of voters listing abortion as their top midterm issue after news of Roe’s imminent demise leaked in the form of a draft court opinion published by Politico.
Unfortunately, their current plan is almost sure to fail.
After the Democrats came up with just 49 votes to bring a Roe-protecting bill before the Senate on May 11, they promised to keep fighting and, in the words of Senator Amy Klobuchar, “take that fight right to the ballot box” in November. But you can’t make an election into a referendum on an issue if you can’t point to anything winning the election would accomplish. To make the 2022 elections a referendum on Roe, Democrats have to put protecting Roe and abortion rights on the table.
Here’s one way to do that: get clear public commitments from every Senate Democrat (and candidate for Senate) not only to vote for the Roe bill in January 2023 but also to change the filibuster rules to ensure that a majority vote would actually pass the bill and send it to the White House for the president’s signature.
At present, there are likely 48 Senate Democrats who can make that pledge. Senators Joe Manchin and Kyrsten Sinema are dead set against any changes to the filibuster — a fact you likely know because most of President Biden’s agenda has been bottled up behind their refusal for the past year. Some claim that Senators Manchin and Sinema are just taking the public heat for a number of other Senate Democrats who are also unwilling to change the filibuster rules. That’s highly unlikely. But if any do have misgivings, that’s why the public commitments are so important. Getting a list of holdouts down to a publicly named handful is the first step to persuading them to fall in line.
Advertisement
Continue reading the main story


If my math is right and there are 48 Senate Democrats ready to make that pledge, they need two additional Democratic senators in the next Congress. And that is the party’s message that makes the 2022 midterms a referendum on Roe: “Give us the House and two more senators, and we will make Roe law in January 2023.”


No ambiguity, no haggling, no living in Senator Manchin’s head for a year. You give us this, and we’ll give you that. That tells voters exactly what will be delivered with a Democratic win. It also defines what constitutes a win: control of the House and two more Senate seats.
The campaign message is clear: If you want to protect Roe, give us those majorities. If this is your passion, here’s where to channel that passion. These are the Senate seats we need to hold (in New Hampshire, Arizona, Georgia and Nevada) and here are the ones we need to win (in Pennsylvania and Wisconsin and possibly in Ohio, Florida and North Carolina). With those commitments in hand, one question should be on the lips of every Democratic candidate. Will you make a firm commitment to never vote for a federal law banning abortion nationwide?
Few, if any, Republicans would be able to make that pledge. And their evasions wouldn’t just make them look ridiculous; that would put squarely on the table the very real threat that Republicans would enact a nationwide abortion ban as soon as January 2025. That could prove enough to win Senate races in Pennsylvania, Wisconsin and Ohio.
In a way, though, this strategy isn’t so much about winning the 2022 midterms or even making Roe into a federal law, although it’s the best way to accomplish both. It’s just an example of how you win elections.

Effective campaigns are built on connecting the intense beliefs of the electorate — their hopes and fears — directly to the hard mechanics of political power. You’ve got to connect those wires. If you were testing some new electrical contraption, that’s the first thing you’d do: make sure the energy supply is wired to the engine that makes it run. This is no different. Without tying a specific electoral result to a clear commitment to a specific legislative action after the elections, you’re not connecting those wires.
What Democrats would be proposing is a classic small-c conservative solution in the best sense of the word. Codifying Roe would preserve the set of rights and protections that the vast majority of Americans have lived their entire adult lives with and that the overwhelming majority of Americans do not want to change. The threat that the court will strike down such a law is real but overstated. And in any case, refusing to act because of what opponents might do is the definition of political paralysis.
So how do Democrats get from here to there?
They likely can’t rely on the party’s leaders, at least not at first. But they’re not essential. It’s really up to voters and activists and particularly committed members of Congress. Probably half the Democrats in the Senate would be happy to sign on this dotted line by the end of the day. Those who are up for re-election, even in safe races, will come around quickly.
Some senators may resist at first. And that wouldn’t be surprising. Politicians seldom see any advantage to committing themselves in advance or reducing their room for maneuver. It’s always safer to keep your options open and be as general as possible until the final moment. That’s why assembling a clear public list of commitments is critical. Once the list gets down to a handful of hesitaters, the pressure from Democrats nationwide, focused on those members, will be overwhelming. If there are real holdouts, they’ll fold in short order.
You don’t need to wait on Nancy Pelosi or Chuck Schumer or President Biden. You can get the ball rolling by calling up your Democratic senator today. 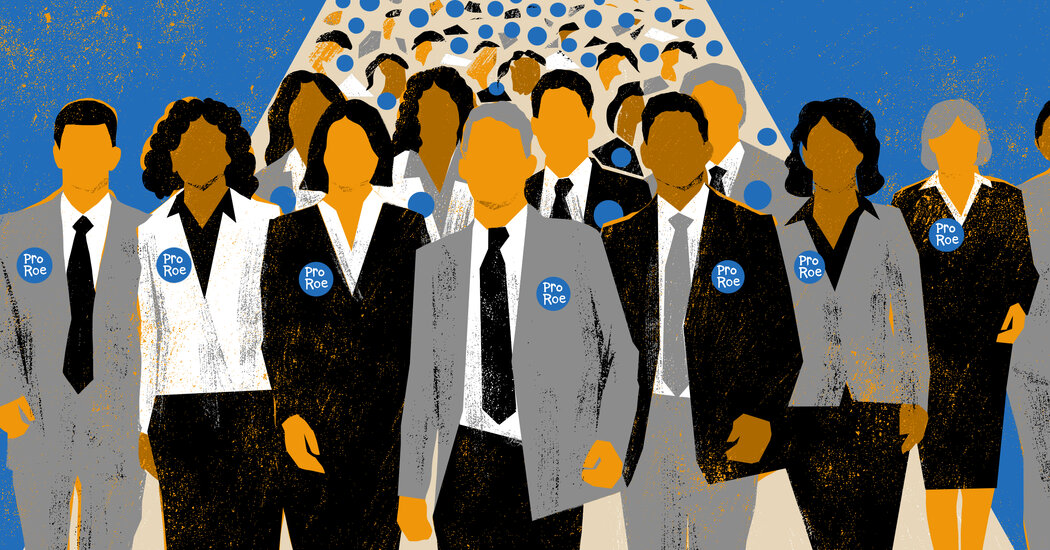 To make the 2022 elections a referendum on Roe, Democrats have to put protecting Roe and abortion rights on the table.

Gas prices and inflation will carry more weight in November than abortion.

At damn near $5 a gallon many families are sinking.

and if you try to bring issues like transgender rights or paying of other peoples stupid loans you will ignite pure rage from a big majority of voters.
Last edited: Jun 6, 2022
Reactions: HawkeyeShawn and kwik44

At damn near $5 a gallon many families are sinking.
Click to expand...

Remember when those idiots, after the first big price hike, laughed when gas went up $7-10per fill, as an overreaction? Now it's $20-30 more per fill. Where are those same idiots?

At damn near $5 a gallon many families are sinking.
Click to expand...

Yep, and they're trying to touch on any issue that will sway public perception, but nothing is working.

That's why you vote on economics & not pointless semantics.

A great economy changes the fundamentals & overall happiness of a nation.
You must log in or register to reply here.

Opinion Republicans could be taking a victory lap. Here’s why they aren’t.

US: Motivation to vote among Democrats jumps to 92%, overtaking Republicans (7-pt boost since March)