The multi-day severe weather threat across the Plains escalated on Thursday, with thunderstorms delivering powerful winds and massive hailstones across the region a day after a meteorologist was killed in a crash during a preceding storm.

The extreme weather event has been declared a Derecho, a long-lived thunderstorm complex that is sometimes called an "inland hurricane" due to the extensive wind damage that often occurs. According to the Storm Prediction Center (SPC), there were 55 significant, hurricane-force wind gusts. "[Thursday was] the day with the 2nd most preliminary hurricane force wind gusts since at least 2004," SPC said.

Furious winds roared across the Plains Thursday with wind gusts over 100 mph tearing across states from Kansas to South Dakota to Wisconsin, taking down power lines and trees, kicking up walls of dust and even rolling semi-trucks.

One fatality was reported near Blomkest, Minnesota, about 85 miles West of Minneapolis, after winds toppled a grain bin onto a car, according to a report from the National Weather Service Storm Prediction Center (SPC). The report didn't note the exact speed of the wind gust.

In Garfield County, Nebraska, near Burwell, the wind knocked about a 15-by-15-foot horse barn on the west side of town, and a roof was blown off the grandstand at the fairgrounds. About 25 trees were reportedly uprooted, according to the SPC.

Brookings, South Dakota, was especially hard hit by the storms and wind. The Brookings Health System reported a surge of injuries following the storm, and several buildings were demolished due to the destructive wind gusts.


Hundreds of storm reports continued to flood in as the evening progressed, noting everything from hailstones with a diameter of 2 inches in locations in Kansas, Wisconsin and Minnesota, to a potential tornado damaging two houses and the side of a school in Castlewood, South Dakota, and wind reports that frequently surpassed 80 mph.

One wind gust in Hutchinson County, located in the southeastern portion of South Dakota, reached 107 mph outside of Tripp around 4:25 p.m., CDT, according to one NWS report. 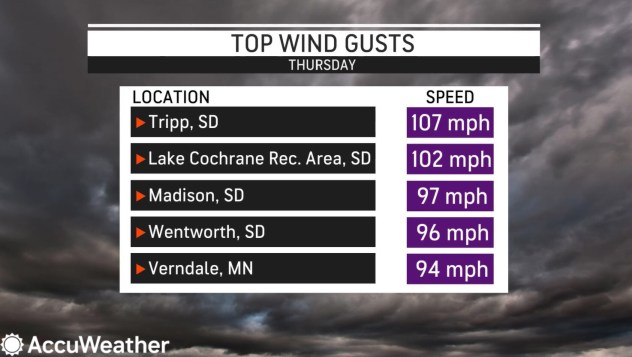 AccuWeather forecasters had previously warned that wind gusts of 70-90 mph were possible with the strongest storms, with an AccuWeather Local StormMax™ of 110 mph.

As the storms continued to develop, thousands of customers in South Dakota, Minnesota and Wisconsin were experiencing power outages Thursday, according to PowerOutage.US. By Friday morning, outages in Minnesota topped 53,000 while 21,000 were in the dark across South Dakota.

Around 8:41 p.m., local time, Extreme Meteorologist Reed Timmer, who was covering the storms in South Dakota, reported that I-29 was closed south of Watertown, South Dakota, due to numerous semi-trucks that had been blown over.

The wind from the storms also kicked up plumes of dust near Sioux Falls, South Dakota, which sits a little to the northeast of Hutchinson County.

"Dust so thick in the air you can taste it, and it's blown into every crack in the house," NWS Sioux Falls Lead Meteorologist Matthew Dux said over Twitter Thursday afternoon.

"Extra traffic is making things difficult and causing more problems," the Sioux Falls Fire Rescue said over Twitter, adding a request or people to stay home and not drive around simply to view the damage.

The system was the latest in a multi-day severe weather outbreak across the region, including Minnesota where one person died in a crash and at least three others were wounded.

All of the vehicles had been traveling on I-90 eastbound when they encountered down power lines associated with the storms. The driver of a 2021 Chevrolet Hatchback, Chilean meteorologist Diego Alvaro Campos, 37, had stopped the car to avoid the power lines when the vehicle was struck by a Freightliner semi-truck. Campos sustained non-life-threatening injuries, as did the passenger Aldo Alberto Viscarra-Avilez, 33, according to the incident report.

Bradford Scott Barrett, 42, and Llanos were also passengers in the Chevrolet, with Barrett sustaining life-threatening injuries in the collision.

Barrett and Campos are both ambassadors of the American Meteorological Society Committee on Hispanic and Latinx Advancement (AMS CHALA).

I really hope I never have to deal with one of those storms again. What a miserable week.
Reactions: Psyclone, GOHOX69 and fredjr82
E

Good thing it is spring, not many leaves in the trees to catch the wind.
Reactions: Moral and GOHOX69
You must log in or register to reply here.

SoCal is fixin to get moist, mmmm’Kay

Off Topic Tuesday at 11:33 AM
onlyTheObvious

For the first time in 25 years, August did not have a named tropical storm...