Under a settlement reached between the league and the NFL Players Association, Cleveland Browns quarterback Deshaun Watson has been suspended for 11 games and fined $5 million for violating the NFL’s personal conduct policy based on allegations of sexual misconduct.

The agreement was confirmed by a person familiar with the situation. The settlement was not immediately announced because it had not been formally completed, but the agreement was in place Thursday, barring any last-minute snags, according to another person with knowledge of the negotiations.

This ends the disciplinary process, avoiding a ruling by an attorney whom NFL Commissioner Roger Goodell had designated to resolve the league’s appeal of Watson’s original suspension. Sue L. Robinson, a former U.S. district judge who is the disciplinary officer jointly appointed by the NFL and NFLPA, initially imposed a six-game suspension on Aug. 1.

The appeal ruling was to have been made by Peter C. Harvey, the former attorney general of New Jersey. The league had been seeking an indefinite suspension of at least one full season, a fine and required treatment in its appeal, according to a person familiar with the situation. If Harvey had decided to increase Watson’s suspension to a full season, that perhaps could have led to a lawsuit by Watson and the NFLPA, renewing the courtroom clashes between the league and the union over player discipline.
Instead, the NFL and NFLPA reached an agreement. Watson’s suspension is without pay. He signed a five-year contract worth a guaranteed $230 million with the Browns when they completed a trade with the Houston Texans for him in March. The deal included a salary of $1.035 million for this season.
In late June, Robinson conducted a three-day hearing. She then considered a post-hearing brief from each side and ruled that Watson had violated the conduct policy and that the NFL proved its case on all three points that it raised, including that Watson committed sexual assault (as defined by the league as unwanted sexual contact with another person).

Robinson ruled that Watson, as the league contended, also violated the policy with conduct that posed a genuine danger to the safety and well-being of another person, and by undermining or putting at risk the integrity of the NFL. She called Watson’s conduct “predatory” and “egregious.” But Robinson also wrote that Watson’s sexual assault was nonviolent, and she was bound, she said, on the length of the suspension by previous NFL discipline for nonviolent sexual assault.
Under a revised version of the personal conduct policy established by the 2020 collective bargaining agreement, either the league or the union was permitted to appeal to Goodell or a person designated by him. The NFLPA and Watson announced on the night before Robinson’s ruling was delivered that they would abide by her decision, urging the league to do the same. The NFL instead exercised its right to appeal on Aug. 3, and Goodell chose Harvey to hear the case.
Each side submitted a brief, and Harvey was to have made his decision without additional testimony or evidence beyond what was available to Robinson.

Goodell said at the conclusion of a one-day NFL owners’ meeting last week in Bloomington, Minn., that the league appealed Robinson’s decision because it felt “it was the right thing to do.”
The NFL continued to pursue a suspension of an entire season, Goodell said then, “because we’ve seen the evidence. She was very clear about the evidence. She reinforced the evidence that there [were] multiple violations here and they were egregious and it was predatory behavior. Those are things that we always felt were really important for us to address in a way that’s responsible.”
Watson issued a public apology in a televised interview before the Browns’ opening preseason game last Friday.

“I want to say that I’m truly sorry to all the women that I’ve impacted in this situation,” Watson said. “My decisions that I made in my life that put me in this position, you know, I would definitely like to have back. But I want to continue to move forward and grow and learn and show that I am a true person of character. And I want to keep pushing forward.”


Some observers viewed Watson’s apology as a potential precursor to a settlement between the league and union on the disciplinary measures. As they negotiated with the NFLPA on the settlement, NFL leaders had to weigh their desire to see Watson punished sufficiently with an inclination to keep a courtroom case from extending into the regular season.
Watson did not play at all last season, as the Texans placed him on their game-day inactive list on a weekly basis. He was not suspended and was paid his entire $10.5 million salary. A hefty fine was seen as a means by which the NFL and NFLPA could seek retroactively to make Watson’s idle 2021 season more closely resemble an unpaid suspension.

The CBA says that Harvey’s written decision would have represented the “full, final and complete disposition of the dispute.” But that might not have prevented Watson and the NFLPA from challenging the appeal ruling in federal court, even if some legal experts said in recent weeks that they would have faced long odds because of the deference the courts would have been expected to give to the collectively bargained dispute-resolution process.


In 2015, the NFLPA managed to put on hold the four-game suspension of quarterback Tom Brady, then with the New England Patriots, for his alleged role in a scheme to under-inflate footballs. Brady played the entire 2015 season, based on a ruling by U.S. District Judge Richard M. Berman. But Brady served his entire Deflategate suspension in 2016 after a federal appeals court reinstated it.
Dallas Cowboys running back Ezekiel Elliott likewise served his full six-game suspension under the personal conduct policy after dropping an appeal in November 2017. The NFLPA managed to postpone the onset of Elliott’s suspension for half of that season.

More than two dozen women filed civil lawsuits against Watson based on his conduct in massage therapy sessions. Watson has denied those allegations. Of the 25 lawsuits filed, Watson has reached settlement agreements with 23 of the women, according to their attorney, Anthony Buzbee. One lawsuit was withdrawn, and one remains pending.
n

Kind of convenient that his first game will be in Houston against the Texans.

Even if he cant' play for 11 games?
Reactions: This_Hawk_Abides

cigaretteman said:
“I want to say that I’m truly sorry to all the women that I’ve impacted, sprayed, dribbled upon, or otherwise splattered in this situation,” Watson said.
Click to expand...

The statement by Watson isn't an apology, by the way. An apology would admit fault, admit that your actions harmed someone else, and then say you wholeheartedly sorry.
I haven't seen all the details, but I have seen it reported that Watson will have to complete some form of awareness training. What form will that take, and is there a trigger mechanism for more penalties if he fails to complete it, or fails to show actual contrition/awareness after the training is completed. He's a serial predator. Those guys don't usually turn over a new leaf.
Reactions: hawkifann

He best figure his bleep out. If he keeps doing this sh1t, women will be less afraid of reporting when there's still evidence and his word is basically trash now.

cigaretteman said:
Even if he cant' play for 11 games?
Click to expand...

Yes. He can’t negatively impact the team that way

Anybody else would be in jail

Is it?
I think Baker-Mayfield was given a raw deal by Cleveland. With what Cleveland has offensively, #6 was good enough to win them a lot of games. Last year he was injured for about 3/4 of the year and they had no adequate back-up.
With the RBs Cleveland has, and the short/ medium pass gMe Baker gives them, Cleveland has more than enough offense to win a lot of games. I really don’t think Watson gives Cleveland any more of an edge than Mayfield.....and Baker-Mayfield gives Cleveland a lot better of a person than Watson does.
Oh well, it is pro football.....’nuff said.

joelbc1 said:
Is it?
I think Baker-Mayfield was given a raw deal by Cleveland. With what Cleveland has offensively, #6 was good enough to win them a lot of games. Last year he was injured for about 3/4 of the year and they had no adequate back-up.
With the RBs Cleveland has, and the short/ medium pass gMe Baker gives them, Cleveland has more than enough offense to win a lot of games. I really don’t think Watson gives Cleveland any more of an edge than Mayfield.....and Baker-Mayfield gives Cleveland a lot better of a person than Watson does.
Oh well, it is pro football.....’nuff said.
Click to expand...

I think they both stink. And I was onboard with both of them a couple years ago. 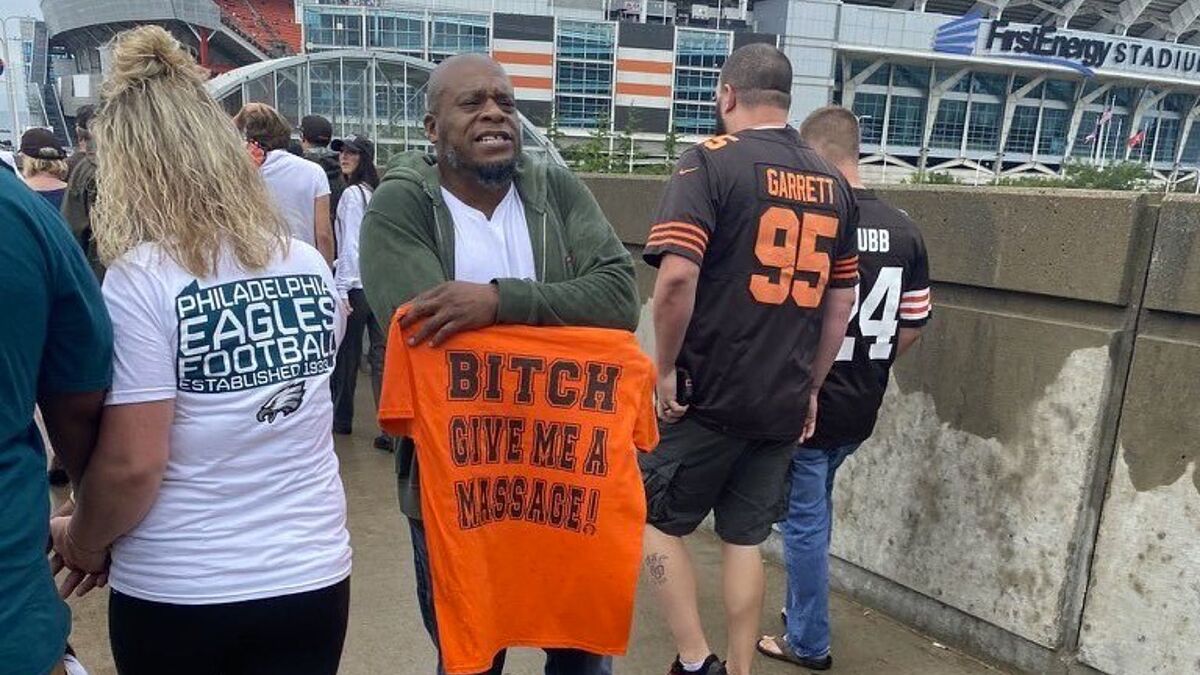 Is this story going to have a happy ending?
Reactions: HawkRugged17, Formerly Rockymtnole and dgordo 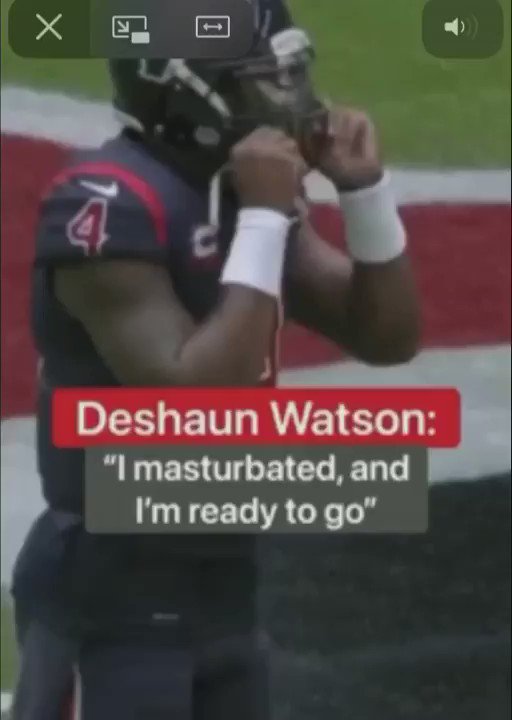 I hope that a fringe Texans player goes rogue and dives straight into Watson's knees.

Too bad it's to late

It’s not right that this guy is playing.
Reactions: NDallasRuss

Jeff Bezos interested in bidding on Commanders, possibly with Jay-Z

You Noles are right....regarding Florida