Did the Supreme Court Open the Door to Reviving One of Its Worst Decisions?

In the annals of the Supreme Court, few opinions have been more reviled than the 1905 decision in Lochner v. New York.
In striking down a law that prevented bakery employees from working more than 10 hours a day and 60 hours a week, the court, under the 14th Amendment, enshrined a constitutional right to “freedom of contract” — that is, the freedom of people to form contracts without the government’s involvement. The decision set the stage for what became known as the “Lochner era” of laissez-faire capitalism.
That era lasted until the Great Depression and the New Deal in the 1930s. In its heyday, the frequently-cited Lochner was arguably the most important business case the court had ever decided, severely curtailing the government’s ability to regulate business and the economy.
Advertisement
Continue reading the main story


Today, Lochner is imprinted on the mind of nearly every law student as an example of a bad decision. While Lochner was never expressly overruled, it, along with the segregation-era decisions of Dred Scott and Plessy v. Ferguson, was practically cast aside by subsequent rulings.

Now, in the wake of the court’s momentous rulings overturning Roe v. Wade in Dobbs v. Jackson Women’s Health Organization and restricting the reach of administrative agencies in West Virginia v. Environmental Protection Agency, the foundation has been laid for, if not an outright resurrection of Lochner, at least a serious reappraisal.
Such a notion may seem far-fetched. After all, Lochner is cited eight times in the various Dobbs opinions — each time as an example of the kind of decision that should be reversed or ignored because it substituted the court’s judgment for that of a duly elected legislature.
But, with settled law suddenly seeming anything but, it’s important to consider what might be coming.
Laurence Tribe, a Harvard Law School professor and a liberal constitutional scholar, said that, based on the logic of Dobbs, “there’s no principled way to hold back the tide that would return us to the law of the late 1800s on matters of privacy, reproduction, sexual intimacy and L.G.B.T.Q. equality.” Although Lochner itself is probably “too radioactive” for this court to embrace outright, the court’s overall hostility to government regulation of business and its celebration of individual freedom are clearly in the ascendant. Professor Tribe warned that the effect could be to “return our jurisprudence to a preindustrial, agrarian world. It’s all but unthinkable.” The consequences, he added, could be “horrendous.”

With six conservative justices, the court seems receptive to a renewed deference to the moribund notion of freedom of contract, a goal that some libertarian and conservative lawyers and scholars have long cherished.

The dominance on the court of “originalism,” the doctrine that interprets the constitution and its amendments as they would have been understood at the time they were written, also bodes well for the principles of Lochner. As David Bernstein, a law professor at George Mason University, contends in his 2012 book, “Rehabilitating Lochner,” proponents of a freedom of contract were “originalists, trying to adhere to what they saw as the constitutional underpinnings of the 14th Amendment’s framers.”
The case for Lochner is plainly embedded in the Dobbs decision. Writing for the majority, Justice Samuel Alito said that rights not explicitly mentioned in the Constitution had to be “deeply rooted in this Nation’s history and tradition” and “implicit in the concept of ordered liberty.” Unlike a right to abortion, freedom of contract is widely believed to meet that definition.
Since the Declaration of Independence was adopted 246 years ago, the freedom to work and to make contracts has been seen as part of the “inalienable rights” of “life, liberty and the pursuit of happiness.” The founders drew on the work of the English philosopher John Locke, who identified “life, liberty and property” as inalienable rights and considered ownership of the self a form of property. The 14th Amendment echoes Locke’s language: “nor shall any state deprive any person of life, liberty or property without due process of law.”
In fact, the notion that citizens had a basic right to enter into contracts, especially regarding their trade or employment, was so pervasive by the time the 14th Amendment was ratified in 1868 that Lochner barely discussed it. The opinion simply asserted that those bakery workers in New York had a right to make a contract as “part of the liberty of the individual protected by the 14th Amendment.”

The right to enter into contracts, even in Lochner, was not all-encompassing. The legitimate exercise of the state’s police powers trumped a right of contract. People couldn’t enter into illegal arrangements, and the state was free to protect the health and safety of workers. Lochner explicitly upheld regulations protecting miners, whose work was inherently unsafe. But the court found nothing inherently dangerous about baking.
Still, many subsequent government regulations that are now taken for granted infringed on this freedom of contract. In 1923, for instance, the court struck down a minimum wage. (Libertarians have long argued that a minimum wage is both bad economic policy and an infringement on individual liberty, especially harmful to those on the lowest rung of the economic ladder.) In the post-Lochner era, that decision was reversed.
Advertisement
Continue reading the main story


Lochner was understandably anathema to organized labor. While its logic would have protected the rights of workers to enter into collective bargaining agreements among themselves, it would never have countenanced efforts by government to favor unions or to require workers to pay union dues whether or not they joined a union.

Still, to argue that Lochner provided the judicial underpinnings for an era of social Darwinism, as many of its critics have contended, is grossly unfair, according to Mr. Bernstein, the George Mason professor. “Lochner isn’t nearly as bad as people say,” said Mr. Bernstein, a self-described libertarian.
He pointed out that, in protecting individual liberty, Lochner wasn’t inherently conservative or pro-business. For example, its logic would have protected Black workers from laws that tried to exclude them from labor markets or that tried to subject them to inferior conditions. It also might have been invoked to support gay marriage, in that marriage is a contract that confers significant benefits on those who enter into it.
Randy Barnett, a law professor at Georgetown University, has argued that while Lochner did have problems its fault was “not the protection it afforded liberty of contract.”
That said, there’s widespread skepticism that even this Supreme Court’s conservative justices, with the possible exception of Clarence Thomas, will go so far as to revive Lochner, even if they find a way to embrace much of its logic.
“I don’t see five votes to revive Lochner — and maybe not even two,” said Akhil Reed Amar, a professor at Yale Law School and the author of the influential “America’s Unwritten Constitution.” He added, “For the court to say you can’t have minimum wage laws and maximum hours, I’m not seeing it.”
Still, he entertained the question. That’s because, he conceded, “we’re living through a judicial earthquake,” when anything might be possible — even a return to opinions long since cast aside.
“This is an originalist earthquake, not a libertarian earthquake,” Professor Amar said. “This court is clearly hostile to anything not explicitly mentioned in the Constitution.” 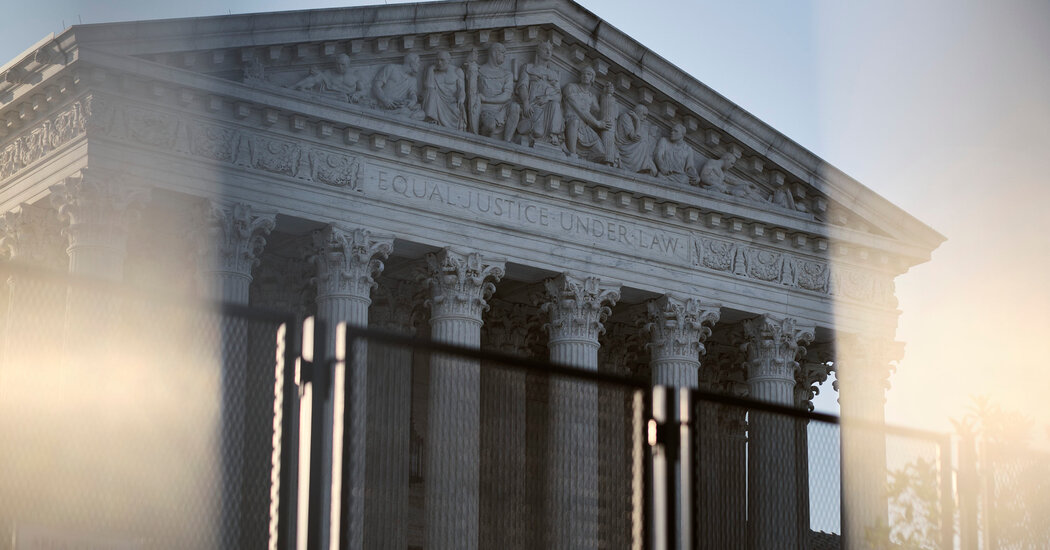 Did the Supreme Court Open the Door to Reviving One of Its Worst Decisions?

Lochner v. New York, a 1905 decision on labor law, is imprinted on today’s law students as an example of bad jurisprudence. But those old days could be returning.

Opinion The Supreme Court eviscerates abortion rights and its own legitimacy