By Tom Scocca
Mr. Scocca, a journalist, writes about American politics.
Sign up for the Opinion Today newsletter Get expert analysis of the news and a guide to the big ideas shaping the world every weekday morning. Get it sent to your inbox.
Did Donald Trump lose in the midterms? Plenty of people declared that he did, from liberal pundits to the Murdoch newspapers — the latter delivering a double whammy from the front page of The New York Post (“TRUMPTY DUMPTY”) and the editorial page of The Wall Street Journal (“Trump Is the Republican Party’s Biggest Loser”).
Though Mr. Trump wasn’t personally on the ballot, just about everyone took these elections to be the first round of his 2024 comeback. He put on a multistate rally tour to lead his chosen Republican candidates over the finish line and, by all accounts, to build anticipation for his own impending entry into the presidential race. And then the Republicans turned in a historically weak midterm performance for the party out of power, with some of the Trumpiest figures going down in the most spectacular defeats. His whole slate of loyal would-be secretaries of state, running on the message that Joe Biden stole the 2020 election, was wiped out. And Gov. Ron DeSantis of Florida, the figure who has come closest to overtly challenging Mr. Trump for the party’s next presidential nomination, romped to victory.
It’s tempting to see the strength of the MAGA forces ebbing at last, the calendar leaf turning over on the Trump era. But how do you declare defeat for a movement that is built around refusing to accept defeat? Mr. Trump and his supporters have been feeding off each other’s worst tendencies for so long, it’s impossible to separate his temperament or strategy from that of the Republican Party.
Consider Dan Cox, the Trump loyalist who lost the governor’s race in Maryland by more than 25 points. In defeat, Mr. Cox issued a statement saying he had called the victorious Democrat Wes Moore to “recognize him on his being declared the winner.” Here, softly phrased, was the Trumpist version of concession: The other side had been declared the winner, according to what someone else said were the facts. Mr. Cox wrote, “Our internal data demonstrated a massive shift of swing voters our way and a huge turnout of Republicans — neither of which is reported to have occurred.”
Advertisement
Continue reading the main story


Belief in Donald Trump means never having to face the facts. If the MAGA movement wouldn’t accept defeat in an election Mr. Trump directly lost, head-to-head, in 2020, why would it accept defeat in this one secondhand? Has everyone forgotten the basic lessons of the nation’s unwilling but thorough immersion in the Trump psyche? From the Trumpian point of view, Mehmet Oz didn’t lose to John Fetterman in Pennsylvania because Mr. Trump has worn out his magic touch; Mr. Oz lost because he, personally, was not Donald Trump.
The leader’s great promise to his followers has always been that he will liberate them from consequences. Turnout numbers and precinct returns, like real-estate bankruptcies, are nothing more than inconvenient opinions, to be overcome by force of bluster, or force of will.
If this attitude has eroded the Republican Party’s public appeal over the past seven years, it has also hardened its grip on the political power it does hold. Sure, Democrats successfully mobilized on Election Day to block the most nightmarish scenarios from taking place: They managed to prevent Trump loyalists from controlling elections across multiple swing states, and the Senate from falling into Republican hands. But elsewhere, Republicans remain intent on their goal of claiming a permanent electoral edge, by whatever means they can find.
For the last two years, Republican state legislators have been openly breaking the law in drawing districts. In Ohio, they flatly defied the state Supreme Court’s orders to draw a better map until it was too late to change the illegal one. And in several other states, they appear simply to be waiting until the Supreme Court throws out the part of the Voting Rights Act that their maps are currently violating. If the G.O.P. does come away from the midterms with a narrow majority in the House, it will owe that advantage to its literal and figurative refusal to abide by legal boundaries.
Look at Florida, which in the MAGA era has been a particularly potent testing ground for authoritarian overreach. Before Mr. DeSantis established himself as a successful culture warrior, picking fights with schoolchildren and Disney alike, he opened his term in office with a different kind of aggressive strategy — working with the Republican Legislature to block hundreds of thousands of Floridians with criminal convictions from the voter rolls, directly contravening a referendum that had restored their voting rights. (The Supreme Court obligingly ruled that the measure, which denied people the vote until they had paid off opaque, unlisted, and potentially prohibitive fines, was not a poll tax.)

The Sunshine State also seems to be testing out a new strain of raw, abusive politics. In October, a canvasser for the once mild-mannered Senator Marco Rubio, wearing a DeSantis hat, was hospitalized after getting into a brawl — and then turned out to have a close relationship with the Proud Boys.
Or turn to Georgia, where the antisemitic conspiracist and all-purpose crank Marjorie Taylor Greene won re-election, and where the oafish ex-football star Herschel Walker is headed into the Senate runoff with enthusiastic party support, despite scandals that would have ended anyone’s political career before 2015.
Or Montana, where Ryan Zinke, maybe the most cartoonishly corrupt member of Mr. Trump’s entire cabinet, won a seat in Congress.
Spiritually and practically, Trumpism was everywhere this election season, and it shows no signs of retreating before the next one. If Mr. Trump’s most shameless supporters faltered at the polls in November, the Republicans who stood up to him were purged from the party long before then. The combination of resentment, rule-bending, and shamelessness that gave rise to Mr. Trump’s presidency is still the reigning attitude of the party — a necessary attitude, for a minority party bent on dominating the majority, rather than forming a majority of its own.
Distrust of and disdain for democratic outcomes shape the party’s agenda, both internally and externally. Before Nevada’s Senate race was called, Senator Lindsey Graham, the eager bellwether of Mr. Trump’s flock, was already telling his Republican colleagues that there was “no mathematical way Laxalt loses.” If he did, Mr. Graham said, it would be a “lie.”
Some Republicans may imagine the 2022 results as a way to rid themselves of Mr. Trump’s particular scandals and his celebrity personality cult. Giving up on his philosophy of impunity, though, is a different thing. They may feel brave enough to call him a loser, but none of them have shown the courage to find another, less Trumpy, way to win. 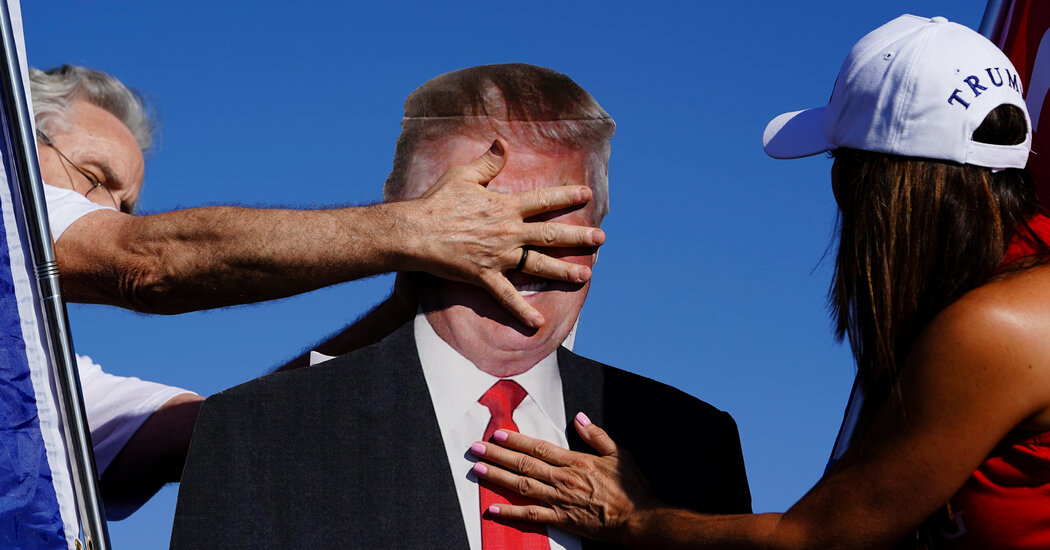 Opinion | Don’t Be Fooled, Trump’s Hold on the G.O.P. Is Stronger Than Ever

He may have taken a hit in the midterms, but his party has internalized his resentment and shamelessness — and will do anything to preserve its power.