“Today’s decision recognized that the weak legal reasoning in Roe v. Wade has done more to provoke conflict than to resolve it, as the late Justice Ginsburg observed,” said Grassley in a statement, apparently believing that Friday’s ruling ending constitutionally protected abortion rights won’t provoke an even more intense conflict. Of course, it will.


“Regardless of your views on this issue, or any other issue for that matter, we all should respect the role of our impartial judiciary and the decisions that it renders. We’re blessed to live in a country where the people play a leading role in how we are governed,” Grassley said.

Yes, it was the people who elected former President Barack Obama to a second term in 2012. And it was Grassley, as chairman of the Judiciary Committee in 2016, who refused to act on Obama’s nomination of Merrick Garland to fill an open Supreme Court seat. Grassley declared he would deny the president’s pick a hearing because it was an election year. He held the seat open for Donald Trump, who nominated Neil Gorsuch. He joined Friday’s 5-4 ruling yanking away abortion rights.


In 2020, as a member of the Judiciary Committee, Grassley helped push through the nomination of Amy Coney Barrett just days before the general election. Barrett also joined the majority in overturning Roe.


Grassley conveniently quotes Ginsburg, but he refused to grant her dying wish and helped shove Barrett through before Donald Trump was defeated.


So it was difficult to feel particularly “blessed” on Friday as the fruits of Grassley’s cynical hypocrisy were harvested to the detriment of millions of Americans. The people, in poll after poll, say they support abortion rights. Grassley doesn’t care.


As for our “impartial judiciary,” please, spare us the high-minded rhetoric. This court has become a wholly owned subsidiary of the Republican Party and its theocratic impulses. The majority decimated abortion rights simply because it could. That’s why Republicans stacked the court by any means necessary.


How else can you explain that on Thursday, the Supreme Court smacked down the ability of blue states to regulate carrying concealed firearms. Then on Friday, the court majority empowered red states to ban abortion. This is the GOP agenda, thinly dressed up in the trappings of court decisions.

Clarence Thomas, in a solo concurring opinion, wrote that the rationale for striking down Roe should be applied to other precedents that relied on the due process clause of the 14th Amendment, including marriage equality and access to contraceptives. Sure it’s one justice, but no rights are truly safe under a court that’s willing act as radically as this court has.


And, of course, we have a governor and Legislature in Iowa that would be more than willing to yank away our rights. The U.S. Supreme Court has given them a green light. And it now seems far less like the Iowa Supreme Court would stop them after its recent decision denying a fundamental right to abortion.


“As Governor, I won’t rest until every unborn Iowan is protected and respected,” Gov. Kim Reynolds tweeted on Friday. So she’s down for a complete abortion ban. It’s hard to read it any other way.


So unless you’re a gun owner, your rights and liberties are sitting on rapidly shifting sand. Our courts can no longer be depended upon to curb our politicians’ worst impulses. Are you feeling blessed? 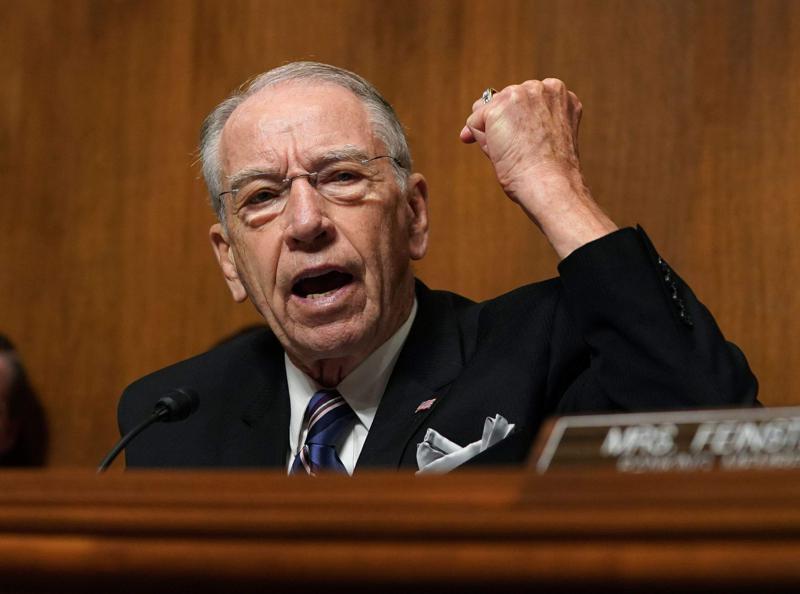 Unless you’re a gun owner, your rights and liberties are sitting on rapidly shifting sand.

On the scale of hypocrisy, the Garland / ACB situation glows red hot. Dirty, dirty pool. Anyone that can defend that with a straight face is a political charlatan of the highest order.
Reactions: blhawk, h-hawk, WrigleyHawkeye20 and 1 other person
M

Then...we can have a pow wow and all piss on his grave together.
Reactions: h-hawk and cigaretteman

Kind of hard to believe given he probably doesn't play a prominent role in wiping his own ass anymore... of course, one could argue that being a republican in 2022 demands less of one's mental faculties than wiping an ass.
Reactions: cigaretteman
I

Every politician should recognize that the current SCOTUS removing given citizen rights and reversing past SCOTUS decisions is a precedent that is beyond slippery. This is way beyond the legalization of abortion, and any/every politician should be asking what this suggests about any other current citizen rights today, and the possibility of past SCOTUS decisions being reversed.

As it relates to Grassley, he is who he is. Most recently he didn't vote for the mild gun legislation because he didn't have time to read it. Pretty pathetic given the interest by his constituents on that legislation - he chose a path that prevents him from stating a position on the topic.
Reactions: mphawk and cigaretteman
T

You sir, are a gentleman and a scholar.

Reactions: cigaretteman and JupiterHawk
You must log in or register to reply here.

This just in: Abortion will remain legal in Michigan, judge rules