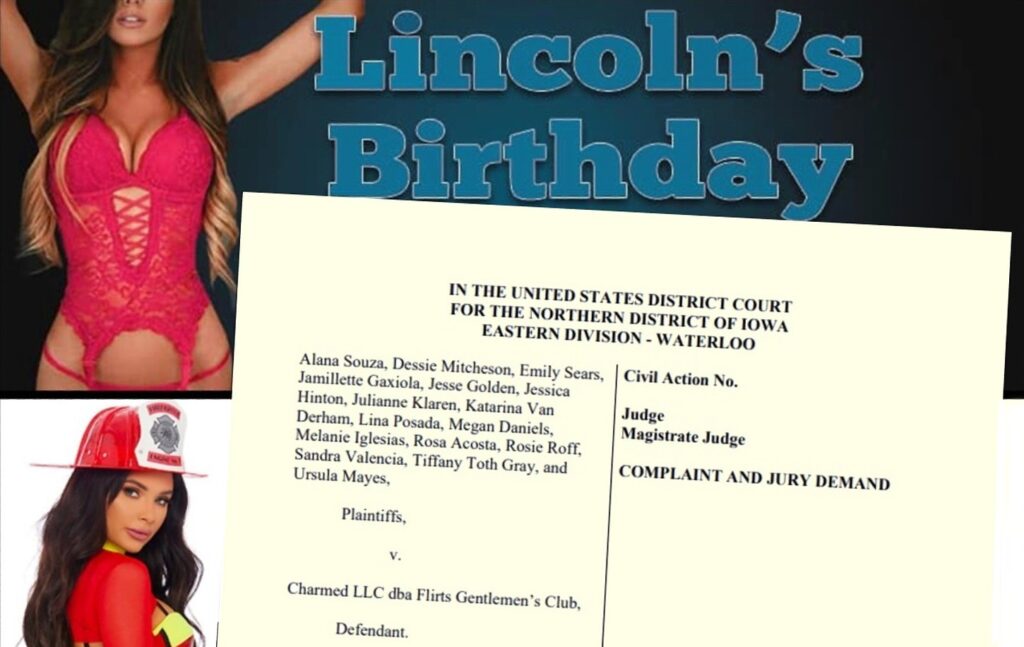 Dozens of professional models are suing nine Iowa strip clubs for the alleged unauthorized use of images of their faces and bodies in online advertisements.
All of the plaintiffs are represented by the BMK Law Firm of Pella and the Aronowitz Law Firm of Royal Oak, Mich. The two firms have filed federal lawsuits against each of the Iowa clubs alleging the same basic set of facts, although the plaintiffs — who are from Ireland, Great Britain, Colombia and the United States — in each case vary.
The clubs being sued are New Shakers in rural Jackson County; the Risque Gentlemen’s Club in Waterloo; Beach Girls in West Des Moines; Big Earl’s Goldmine in Des Moines; the Lumberyard in Des Moines; the Lumberyard II in Cedar Rapids; the Minx Show Palace in Des Moines; Daisy Dooks in Davenport, and Flirts in Waterloo.
The lawsuits, each filed on the same day in U.S. District Court, seek compensation, damages and an injunction against the clubs’ owners.
The biggest of the cases, based on the number of plaintiffs, is against Flirts, the Waterloo club. In that case, 16 professional models allege that although they have never appeared at the club and have “no prior affiliation whatsoever” with Flirts, the owners have repeatedly used their likenesses to promote Flirts on social media.
The plaintiffs claim Flirts’ advertisements on its Facebook page use their likenesses to suggest they have performed at, or have at least agreed to promote, the club. They claim they would not advertise or promote such a club since that sort of affiliation can “harm, defame and disparage” their reputations and their brands, making it more difficult for them to obtain work or market their modeling services.
According to the lawsuit, Flirts advertises itself as “Cedar Valley’s Hottest Gentlemen’s Club” and serves alcohol to patrons while providing entertainment in the form of nude or partially nude entertainers. The club allegedly advertises a VIP membership program that “guarantees you premier access to any dancer you have your eyes on,” as well as “a fun time with sexy, exotic female dancers.”
The plaintiffs, some of whom are partially undressed in the photos at issue, allege that Flirts’ advertisements are damaging in that they suggest the women “approve of the full or partially nude live entertainment activities” offered by the club.
At the same time, the models claim the club is “competing with the plaintiffs over the very same consumer attention that contributes to the economic value of the plaintiffs’ images.”
In their petition, the models claim that due to their “attractiveness and individually distinctive physical looks,” they have all attained a “degree of fame, celebrity and public prominence” while cultivating a substantial social media following. The club, the lawsuit alleges, “palmed off the goodwill and consumer attention-generating qualities of the plaintiffs as their own, all without permission, compensation, consent, or license.”
The plaintiffs are seeking unspecified damages, fair market value compensation for the use of their likenesses, and a permanent injunction barring the club from again using the images at issue.
The plaintiffs in the case against Flirts include Rosie Roff of the United Kingdom; Melanie Iglesias, a model from New York; Sandra Valencia of Colombia; Alana Souza and Jamillette Gaxiola, both of whom are from Nevada; and Tiffany Toth Gray, Ursula Mayes, Rosa Acosta, Megan Daniels, Katarina Van Derham, Lina Posada, Jesse Golden, Dessie Mitcheson, Jessica Hinton, Julianne Klaren and Emily Sears, all of whom are from California.
Some of the plaintiffs in the Flirts case are among the models named in the other lawsuits against Iowa clubs. The club owners have yet to file responses to the allegations.
In March, an exotic dancer filed a class-action lawsuit against the West Des Moines’ Beach Girls club where she allegedly worked without salary and had to pay the owner for the right to work for tips. Cierra Turner is suing the company Pretty Women Inc., which owns the club, for alleged violations of state and federal minimum-wage laws, unjust enrichment, and unlawful tip sharing. 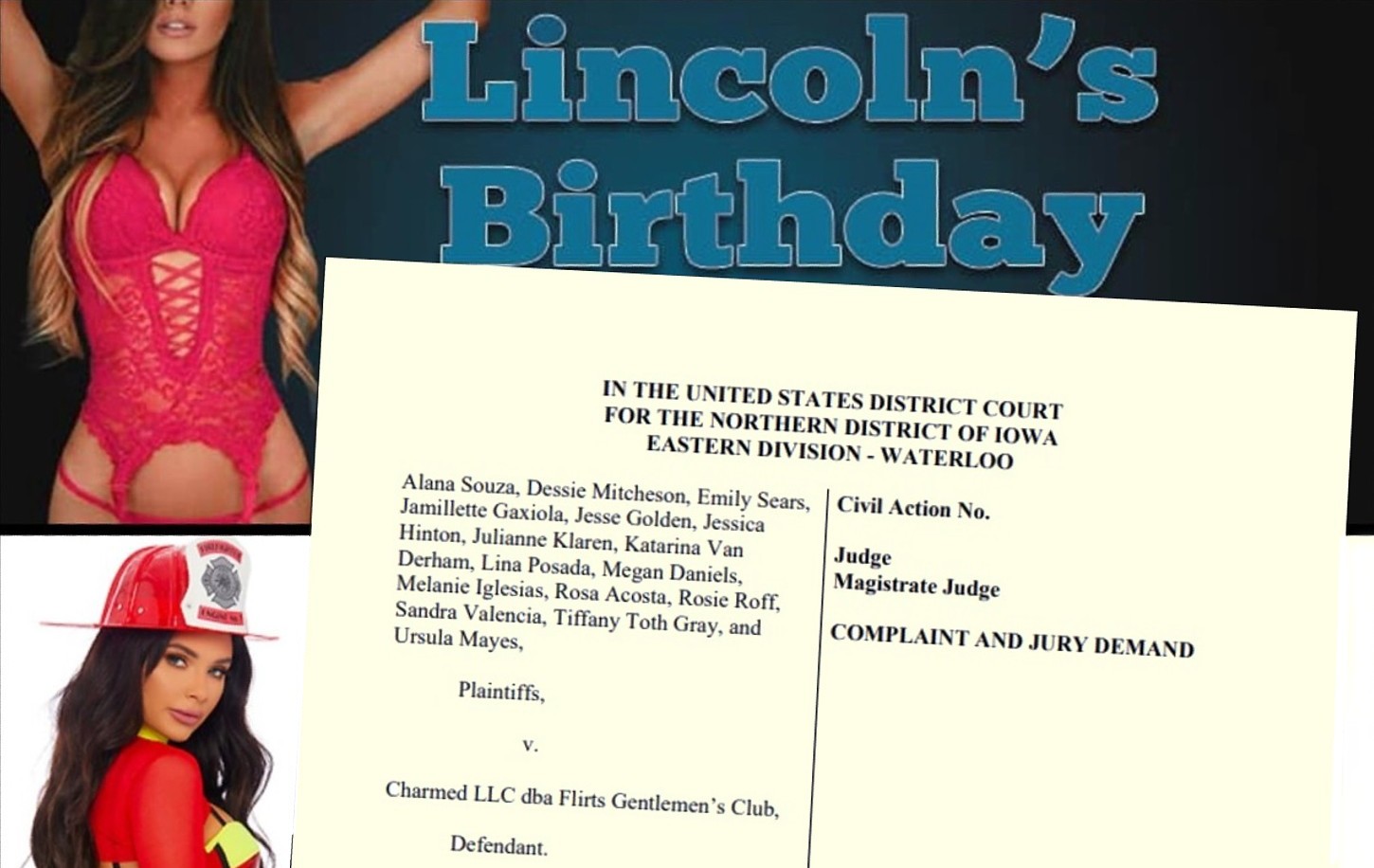 Dozens of professional models are suing nine Iowa strip clubs for allegedly using their likenesses to promote the clubs.

It’s nice to see a stripper using Ciera instead of Sierra. Differentiates her from all the other strippers with that name.
Far fewer Tiffanys on the list of plaintiffs than I would have thought.
Reactions: jasonrann, fsu1jreed and NDallasRuss

Fine, I’ll do some pro boner work for these ladies and see what I can get done.
Reactions: sob5, fsu1jreed, binsfeldcyhawk2 and 1 other person
B

Hawki97 said:
Fine, I’ll do some pro boner work for these ladies and see what I can get done.
Click to expand...

Stand up for their rites (of passage).

There is a strip club in La Motte Iowa? Do not want.
Reactions: Doogiedoggie, lucas80 and NCHawk5

We should do an HROT party bus tour weekend and see if we can hit all nine.
Reactions: sob5
A

Is that a hooker joke?

lucas80 said:
Far fewer Tiffanys on the list of plaintiffs than I would have thought.
Click to expand...

NCHawk5 said:
Is that a hooker joke?
Click to expand...

All this fighting for NIL deals for college athletes, but not these ladies? Unconscionable.
Reactions: NCHawk5

Is there a difference?

Should be easy case assuming there are signed documents regarding

Moral said:
There is a strip club in La Motte Iowa? Do not want.
Click to expand...

You remember Dancers Ranch in CR? I think it was on 6th street sw or something. Anyway, the Packers of Green Bay had just won a pivotal playoff game and we decided to celebrate with more alcohol and strip clubs. Well we land at Dancers Ranch at about 9pm on a Sunday night and the talent was….well they were female. The dancer on stage as we walk in, probably 6 months pregnant. The other gals, don’t remember but not attractive. Preggo chick was actually pretty fun and was hitting on my girlfriend at the time. CSB, I know.
Reactions: Moral

Moral said:
There is a strip club in Iowa? Do not want.
Click to expand...

Jury selection excuses “your honor, my wife will divorce me if I serve on this jury “

We are about the same age, I think.
So, guilty as charged.

So are these women dancers but have never danced at these establishments or they aren’t dancers at all? Either way, this should be an easy win.
D

onlyTheObvious said:
Jury selection excuses “your honor, my wife will divorce me if I serve on this jury “
Click to expand...

Or just show up with a wad of dollar bills.

Well this is great news for Pella’s Tulip Time committee folks. If there is a favorable verdict for the girls, the BMK Law Firm ( not familiar with this firm but maybe if I heard the names) will have a new float entry for next year’s parade!
If any of these girls are college co-Ed’s, can they collect twice, once from this law suit and secondly under the “NIL” rules ?
STRIPPERS NEED LOVE, TOO!
You must log in or register to reply here.

Off Topic Friday at 2:37 PM
Pinehawk