Drew Tate’s football career has brought him back to Iowa.


The former all-Big Ten quarterback has returned to the Hawkeye state, but this time as a Panther — joining Mark Farley’s staff at Northern Iowa as tight ends coach.


“He’s been with us busting his tail day in and day out,” Farley said. “He just wants to learn the whole concept. I like the guys that have the energy and ability and the fire of a new coach that they can run around with the players and teach the techniques because they did the techniques.

“He needs the opportunity to be a coach.”


Tate echoed Farley’s comments of energy and the ability to teach techniques. Being only four years removed from playing in the Canadian Football League, he knows he can earn buy-in from players given his recent experience.


“I think my name and my experience, these kids, they trust me,” Tate said. “I’m not a car salesman. I’m not going to tell them something that’s not going to help their game on and off the field.


“I played for coaches that never played and they’re telling me things and I’m kind of like, ‘you’re insane.’ In my small amount of time coaching and as a player, you’re going to get the best out of your player if that player trusts you.”


The Baytown, Texas, native’s coaching career began in 2018 when he was a defensive analyst at Coastal Carolina. In 2019, he coached quarterbacks for the CFL’s BC Lions and in 2020 he coached wide receivers, tight ends and running backs for the TSL Alphas of the short-lived Spring League.


In 2021, he coached quarterbacks at Tennessee-Martin and helped the program to its first playoff win.

“That was the best experience ever — coaching those (quarterbacks),” Tate said. “Always (have) wanted to coach quarterbacks my whole life and finally had the opportunity and had success.”


Tate’s evaluation of what makes a good quarterback and how to get the best out of one should make Hawkeyes fans reminisce about the player he became at Iowa.


“I think it’s about keeping things simple. I believe that the quarterback position is the most over-coached position in all of sports,” Tate said. “You got to be a really competitive guy to play quarterback.


“To me, if your quarterback doesn’t have confidence, you don’t have a quarterback.”


When it comes to the here-and-now of sharpening his skills as a tight ends coach, Tate said he’s benefited most from listening to fellow coaches Brandon Keith and Joe Ganz.


Meanwhile, as Farley pointed out, he’s eager to learn the whole concept of a college football program.


“I want to be a coordinator, I want to be a head coach and my past so far in a short amount of time in coaching, to me, leads to that,” Tate said. “Starting on defense (and) now I’m coaching tight ends. I think that’ll just make me a much more well-rounded coach when that time comes.” 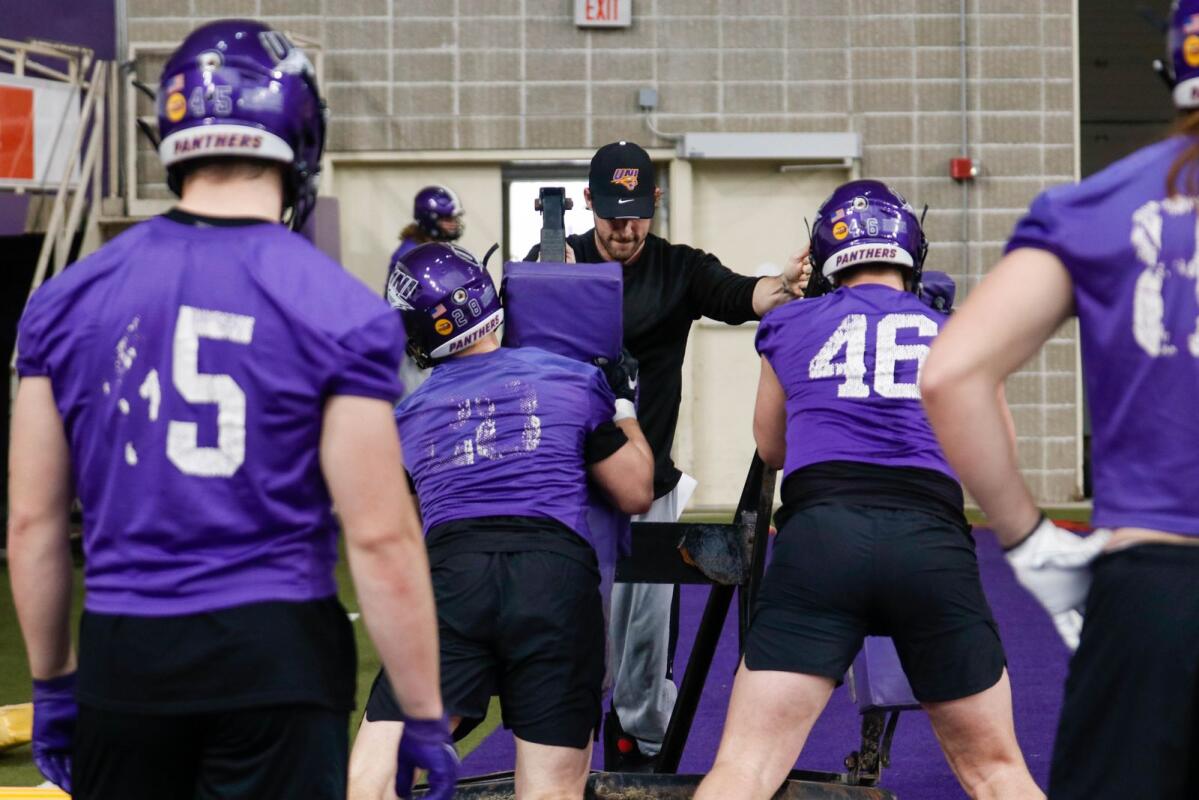 Drew Tate eager to coach and learn at UNI

Drew Tate is back in the state of Iowa as Northern Iowa tight ends coach, looking to develop into a well-rounded coach with goals of becoming a coordinator and head coach in the future.

Does Iowa hit paydirt again in 2022, with help now of a former Badger?

The Hawkeye Lounge Monday at 6:45 AM
Kabby
K