Donald Trump, twice impeached for seeking to undermine the integrity of the 2020 presidential election, says he is running for president again in 2024.
His new campaign has begun with the same ugliness, lies and chaos as the last, but it poses even greater dangers to American democracy.
Mr. Trump and his supporters can no longer pretend to be good-faith participants in the democratic process. They have enshrined the refusal to accept adverse election results as a defining feature of their political movement, sought to install true believers in local and state election offices and demonstrated a willingness to resort to violence.
Advertisement
Continue reading the main story


Mr. Trump is unfit for public office. As president, he showed himself to be incompetent and self-dealing. He should have been convicted by the Senate in 2019 for abusing his power and in 2021 for inciting an insurrection. Voters repudiated him at the ballot box after his second campaign, but he has the legal right to try again, so Americans must weather the trial of a third candidacy. If he is still in the race when the first votes are cast in 2024, the election will once again be a referendum on American democracy, because if our system of government is to survive, voters must choose leaders who accept and submit to the rule of law.


The first state primaries, however, are still over a year away, and before then, there is work to be done.
Congress needs to pass a bill overhauling the Electoral Count Act before the end of the year to make it harder for congressional supporters of Mr. Trump, or any other presidential candidate, to challenge the election results that are submitted by the states. The legislation also includes other safeguards. For example, it would steer disputes over vote tallies to the courts, giving the final say to judges and not partisan officials.
American voters last week rejected every one of the most dangerous election deniers running for key state offices in battleground states — from Mark Finchem and Jim Marchant to Tudor Dixon and Kari Lake. Still, there is a real danger of meddling by state and local election officials and members of Congress who deny that Mr. Trump lost the 2020 election.
Legal proceedings against Mr. Trump and investigations related to his actions around Jan. 6, election interference in Georgia and his mishandling of classified information at his home in Florida also need to continue. Allowing him to avoid legal accountability by declaring himself a candidate for office would be dangerous.


Mr. Trump has many loyal supporters, who regard him as a flawed but effective champion. His rise to power was built on the idea that he is a winner and, for many Republicans, his victory in 2016 was sufficient justification for having supported him. It allowed the party to cut taxes and take firm control of the Supreme Court, opening an era of conservative jurisprudence, including the reversal of Roe v. Wade this year.
But Republicans, even those who share Mr. Trump’s views on issues like China, trade and immigration, should recognize that it is shortsighted to pursue such goals by undermining the integrity of the political process. If Americans doubt the legitimacy of elections and their leaders fuel and inflame those doubts, they will no longer accept the legitimacy of decisions or policies of the federal government that contradict their views. Without that fundamental principle of democratic governance, American democracy crumbles.
The leadership of the Republican Party initially tried to prevent his rise, but over the four years of Mr. Trump’s presidency they failed to hold him accountable every time they had a chance to do so. Since he left office, they have continued to allow the cult of personality around him to grow unchecked, even as he demands personal loyalty and punishes those in the party who defy him, and many have refused to condemn even his worst excesses.
To see the extent of the damage that support for Mr. Trump has wrought, Republicans might look to any of the communities and institutions — schools, universities, churches and the armed forces, among others — to which their supporters belong. Trumpism has proved to be a damaging and divisive force even among conservative stalwarts. Evangelical Christians, for example, have become deeply divided, not along party lines but because, as Peter Wehner wrote last year in The Atlantic, in many churches, being considered faithful now means professing blind loyalty to one former president. 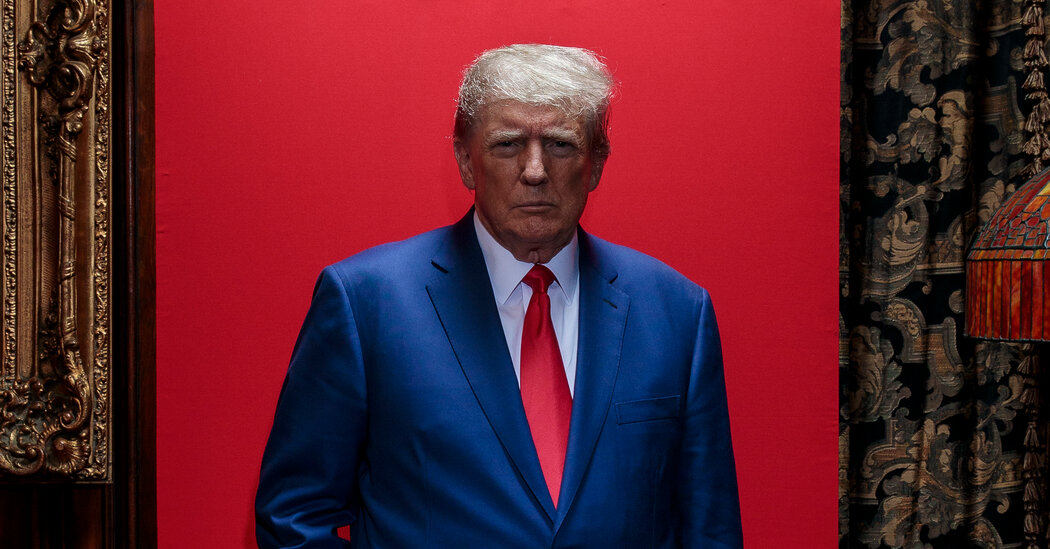 Mr. Trump’s candidacy should serve as a clarion call to those who are willing to fight for the soul of the Republican Party. While this board does not support many of their policy positions, some leading figures in the party — including former Vice President Mike Pence, Representative Liz Cheney of Wyoming, Gov. Ron DeSantis of Florida, former United Nations Ambassador Nikki Haley, Senator Tim Scott of South Carolina and Gov. Chris Sununu of New Hampshire, among others — have demonstrated a commitment to the rule of law and an ability to govern.
Advertisement
Continue reading the main story


The country and the Republican Party need a robust nomination fight in which Mr. Trump’s record is scrutinized and held to account by other Republicans, and where alternative visions of the country and the party are presented and debated.
The case against Mr. Trump is straightforward. He uses demagogy to stoke racism. He lies about matters great and small. As president, he frequently placed his personal interests above the national interest. He promised to lift up ordinary Americans and instead delivered tax cuts for the wealthy that significantly increased the federal debt. He was a friend to dictators and an inconstant ally to liberal democracies. He made the country’s military position in the world demonstrably weaker by foolishly withdrawing from the Iran nuclear deal, which even a senior Israeli official now concedes was a serious self-inflicted wound. And in perhaps his greatest test as president, he treated the Covid-19 pandemic as a public relations problem, downplaying the danger and resisting basic safety measures that would have saved lives.
If he is elected, a second Trump term would lack whatever guardrails were in place during the first. Over the course of those four years, Mr. Trump grew bolder in his defiance of the other branches of government, disregard for the law and flagrant abuses of presidential power. This time, he would be running with the support of those who are not only aware of his worst abuses but have also embraced him as the wronged party. He is likely to be surrounded even more completely by sycophants. Consider, for example, whom Mr. Trump might choose as an attorney general. At the end of his term, Mr. Trump forced out his own attorney general, Bill Barr — a loyal supporter but someone who was unwilling to openly break the law — and tried to install a midlevel Justice Department official whose primary qualification was an apparent willingness to do exactly that on Mr. Trump’s behalf. A second term promises to be a revenge tour of grievances and political payback.
The Democratic Party has an obligation to do more than simply point to those possibilities. Democrats must take seriously the challenge of offering to Americans an appealing alternative. The ultimate justification for democracy and upholding the rule of law is that it is the system of government that provides the best life for the most people. Democrats argue, correctly, that voting against Mr. Trump and his allies is the principled course. They must also show voters that democracy is worth defending, and that it will improve their lives and the lives of their children. In countries where weak, ineffective opposition parties leave people without hope or good alternatives, it is easier for autocrats to fill the void.
Mr. Trump gravely damaged American democracy, but there are promising signs that the wounds are beginning to heal. Nearly without exception, the losing candidates in the recent midterm elections have conceded with grace — even some of those who had attacked the integrity of the election system during their campaigns. The return of Mr. Trump’s dark circus threatens that progress. He will once again tempt Americans with misinformation and outright lies, veiled threats and outright calls for violence, insults and provocations. By rejecting his bid for a political revival, Americans can put Mr. Trump in the past, and get back to the hard but necessary work of self-government.

I don’t know about America, but I sure as hell deserve someone better than the traitorous Trump!
You must log in or register to reply here.