Federal agents armed with a search warrant have seized the phone of John Eastman, a lawyer who advised former President Donald J. Trump on key elements of the effort to overturn the results of the 2020 election, according to a court filing by Mr. Eastman on Monday.
The seizure of Mr. Eastman’s phone is the latest evidence that the Justice Department is intensifying its sprawling criminal investigation into the various strands of Mr. Trump’s efforts to remain in power after he was defeated for re-election.
In the past week alone, the department has delivered grand jury subpoenas to a variety of figures with roles in backing Mr. Trump’s efforts and it carried out at least one other search of a key figure.
Advertisement
Continue reading the main story


The filing by Mr. Eastman, a motion to recover property from the government, said that F.B.I. agents in New Mexico, acting on behalf of the Justice Department’s Office of the Inspector General, stopped Mr. Eastman as he was leaving a restaurant last Wednesday and seized his iPhone.

A copy of the warrant included as an exhibit in Mr. Eastman’s filing said that the phone would be taken to either the Justice Department or the inspector general’s forensic lab in Northern Virginia.
According to the filing, the seizure of Mr. Eastman’s phone came on the same day that federal agents raided the home and seized the electronic devices of Jeffrey Clark, a former Justice Department official who was central to Mr. Trump’s attempts to coerce the department’s leaders into backing his false claims of fraud in the election.
The inspector general’s office, which has jurisdiction over investigations of Justice Department employees, also issued the warrant in the search of Mr. Clark’s home, a person familiar with the investigation said. The warrant indicated that prosecutors are investigating Mr. Clark for charges that include conspiracy to obstruct the certification of the presidential election, the person familiar with the investigation said.
A spokesman for the U.S. attorney’s office in Washington, which is overseeing the inquiry, declined to comment on Mr. Eastman’s court filing.

With Mr. Eastman and Mr. Clark, the department is gathering information about two lawyers who were in close contact with Mr. Trump in the critical weeks before the Jan. 6, 2021, attack on the Capitol by a pro-Trump mob.

The advice they were giving Mr. Trump involved separate but apparently intersecting proposals to provide him with a means of averting his defeat, with Mr. Clark focused on using the power of the Justice Department on Mr. Trump’s behalf and Mr. Eastman focused on disrupting the congressional certification of the election’s outcome.

The search warrant executed on Mr. Eastman by the inspector general’s office may have been issued because of his connections to Mr. Clark, which were briefly touched on at a hearing by the House select committee on Jan. 6 last week, a day after the raids on the two men.
At the hearing, Representative Liz Cheney, Republican of Wyoming and the panel’s vice chairwoman, said that Ken Klukowski, a Justice Department lawyer who was in contact with Mr. Eastman, also helped Mr. Clark draft a letter to Gov. Brian Kemp of Georgia stating falsely that the Justice Department had identified “significant concerns” about the “outcome of the election” in Georgia and several other states.
The letter further recommended that Mr. Kemp call a special session of the state legislature to create “a separate slate of electors supporting Donald J. Trump.”
Advertisement
Continue reading the main story


Mr. Klukowski, who briefly served under Mr. Clark at the Justice Department and had earlier worked at the White House budget office, also “worked with John Eastman,” Ms. Cheney said during the hearing. She went on to describe Mr. Eastman as “one of the primary architects of President Trump’s scheme to overturn the election.”

The inspector general’s office has the authority to look into any public corruption crimes committed by Justice Department personnel, said Michael R. Bromwich, a former department inspector general during the Clinton administration.


“Those investigations can lead to people and places outside the Justice Department,” Mr. Bromwich said. “There must be a connection between Eastman and someone who worked at the department.” 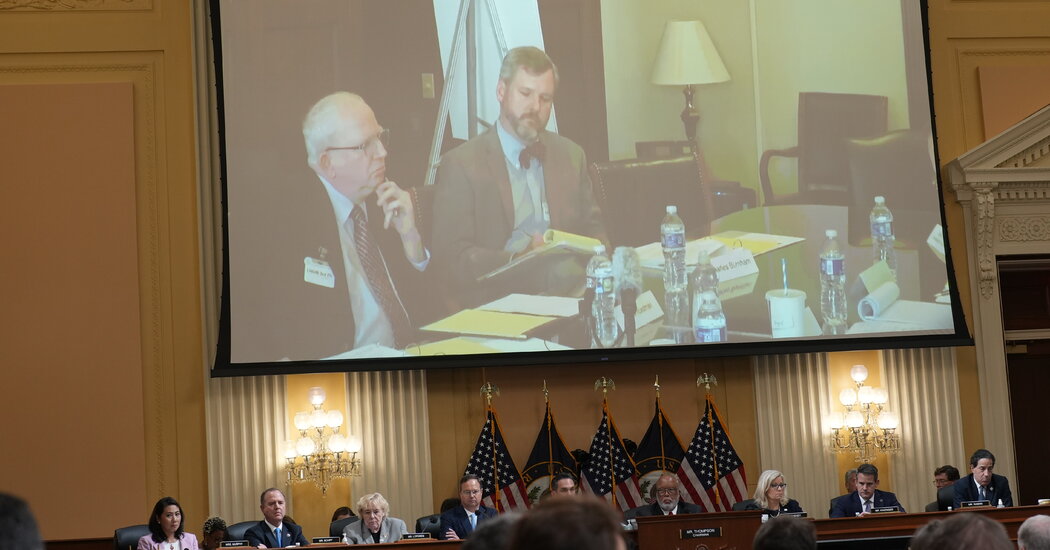 The action suggests that the criminal inquiry is accelerating into the efforts to help overturn the results of the 2020 election.

Be funny if he just got the phone last month
Reactions: Bonerfarts

Reactions: lucas80, cigaretteman and Funky Bunch
You must log in or register to reply here.