Here’s an excerpt from a newspaper editorial supporting abortion rights.

It’s from The Gazette, but not in 2022. It was published on May 12, 1972, nearly eight months before the U.S. Supreme Court issued its ruling in Roe v. Wade granting a constitutional right to an abortion. That right existed until this year, when a radically conservative Supreme Court struck it down.

The Gazette opined multiple times in 1972 for lifting state bans on abortion. I know, I know, The Gazette was a rock-ribbed bastion of conservatism until sometime around the moment I came in the door 15 years ago. Its leftward slide accelerated as soon as I got my hands on the opinion page and followed direct orders from my handlers in Havana.

Or maybe not. With the issue hanging in the balance 50 years ago, The Gazette favored legal abortion. The editorial quoted above chastised President Richard Nixon for his apparent opposition to leaving reproductive decisions to individuals, not government.

Earlier in 1972, on March 24, under the headline “Abortion-Choice Urged,” The Gazette sided with a recommendation from Nixon’s Federal Commission on Population Growth and The American Future to legalize abortion. And, no, its recommendation was not about population control.

“It stressed free-choice abortion as a matter of individual freedom and moral judgment that any persons faced with the need should be able to make in personal terms,” The Gazette’s editorial argued.

We then quoted the commission’s recommendation.

“The commission believes that various prohibitions against abortion throughout the United States stand as obstacles to freedom; the freedom of women to make different moral choices based on their personal values, the freedom of women to control their own fertility, and finally, freedom from the burdens of unwanted childbearing,” the commission wrote.

“In short, no school of thought should dictate to another on this highly individual concern, and states should simply let their laws allow for either choice,” The Gazette opined. “Sooner or later, so should Iowa and all the rest.”


It turned out to be sooner. On Jan. 22, 1973, the Supreme Court issued its ruling in Roe v. Wade. The Gazette greeted it with an editorial under the headline “Abortion Cloud Lifts.”


“By good and sturdy votes of 7-2, a reputed conservative U.S. Supreme Court has overruled as unconstitutional two state laws (of Texas and Georgia) that impose undue restrictions on the rights of women to abortion as a matter of personal choice,” The Gazette opinion said.


Well, the ruling was sturdy enough to survive nearly five decades, but not sturdy enough to turn back a conservative-packed court’s crusade to remake American society. It’s painfully ironic that you can find better, more reasonable judgment in the antique clippings of an old newspaper than on the nation’s highest court and among its architects in the Republican Party. U.S. Sen. Chuck Grassley included.


They’ve taken us back 50 years, to the days when states dictated our choices and we were forced to abide by one side’s moral judgment. And yet, they’re running on “freedom” this fall. Don’t buy it. Vote accordingly. 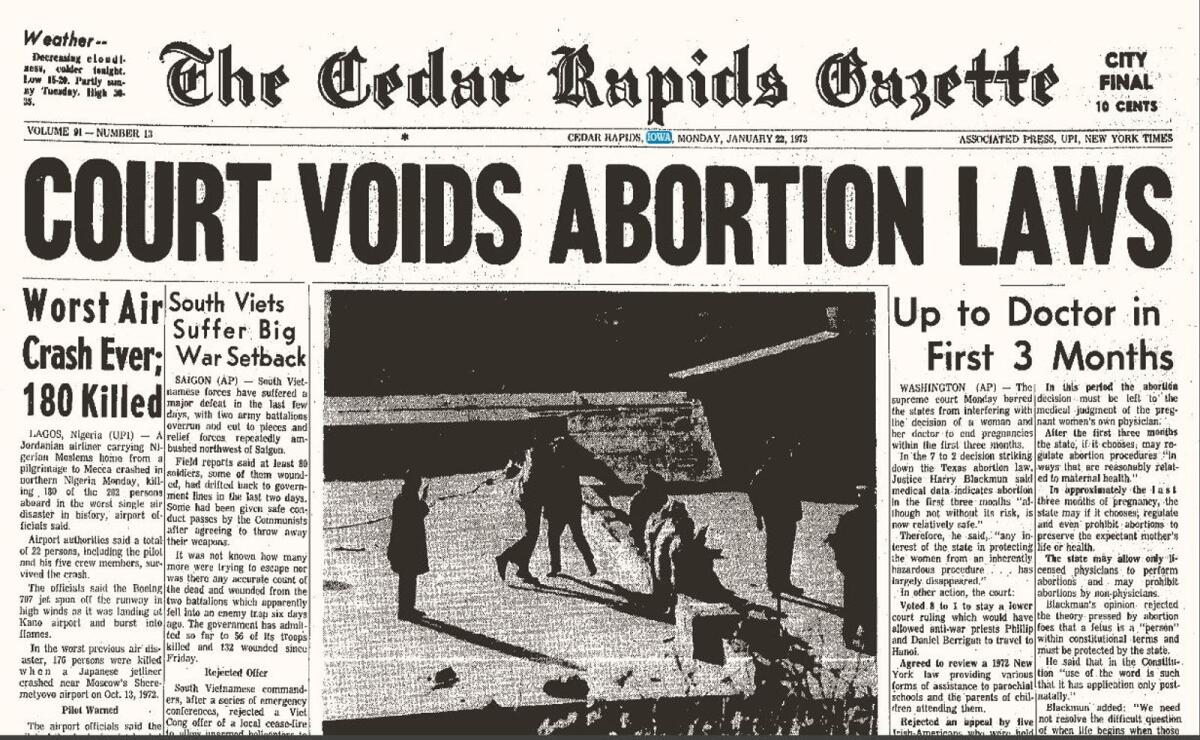 Here’s an excerpt from a newspaper editorial supporting abortion rights. “When reasonable people disagree about moral judgments, the reasonable answer …

"When reasonable people disagree about moral judgments, the reasonable answer is not to write one side’s judgment into law and force ALL people to abide by that."

Goes for both sides, right?