Given endless resources, Tucker Carlson zeroes in on UFOs and testicles

Tucker Carlson and his team are in the television business, so it’s not surprising that one of the trailers for the second season of “Tucker Carlson Originals” — his short-form documentary series that airs on Fox News’s streaming platform — has managed to generate a lot of chatter.

What else would one expect from a snippet showing a nude man standing on a rock in the middle of nowhere, euphorically tanning his genitals?
Sign up for How To Read This Chart, a weekly data newsletter from Philip Bump
This was part of the trailer for an episode called “The End of Men.” It picks up on a line of argument that Carlson has been promoting for years now: that men — specifically American men — are weaker physically than they used to be and that this translates into weaker political leadership. The video is a weird combination of homophobia and homoerotica, but we can leave that to others to analyze. Either way, it’s a compelling bit of marketing. The testicle-tanning is the lure; the trap closes when you agree to follow the line from that to Carlson’s broader argument about a decline in masculinity and the rise of the left.


Because this is Tucker Carlson, it’s useful to remember that whatever the subject, the ultimate destination is the same: White Americans, particularly older men, are embattled in an increasingly hostile culture and he is giving them the tools to fight back. This episode isn’t called “Examining an Apparent Drop in Testosterone Levels,” after all. It’s apocalyptic, as is nearly everything Carlson produces. Everything is part of the same us-or-them, now-or-never fight between real, masculine Americans and the effete elites.
Carlson introduced this season with an hour-long special in which he interviewed some of the subjects of upcoming programs and spoke with a Fox News executive, Justin Wells, who effused over season one. Carlson celebrated Fox’s willingness to give him the space and resources to do what he wants, which is clearly the case.
“We rattled a few people in the ‘mainstream media’ or whatnot, obviously,” Wells said of the show’s success, deploying air quotes, “because perhaps some of the stories are controversial, but they’re topics that people care about deeply.”

You’ll remember that one of the shows that the “mainstream media” found dubious was a lengthy attempt to recast the attack on the Capitol on Jan. 6, 2021, as driven by government provocateurs. The three-part series included interviews with a former Trump administration staffer fired for links to white supremacists and with one of the organizers who pushed the “Stop the Steal” narrative after the 2020 election. But the primary thrust was, once again, that the bad guys — the left, the Democrats, etc. — wanted to use the Capitol riot to cast the right as racists and dangerous to the country as part of a social or literal purge. This did not manifest.
The more interesting part of what Wells said, though, is that people “care about” these subjects “deeply.” Carlson himself had said something similar a few minutes before, stating that he and his team had made “a series of long-form documentaries about issues that we think matter to the country and to you.” The idea, which Wells and Fox probably hope is self-fulfilling, is that the shows tend to a nascent curiosity in the audience.
The reality is different.

Carlson is very much like former president Donald Trump in his ability to capture the passions and concerns of America’s political right. But Carlson does something that Trump often only pretends to do: He actually shapes what people are thinking and focused on. Trump’s political strength was always rooted in being able and willing to elevate what the right-wing media was focusing on. Carlson’s strength is in directing that focus.
A good example is coronavirus vaccines. Trump wants his base to see the vaccines as a miracle that he brought them. But, thanks in part to skepticism stoked by people like Carlson, who would rather the right see vaccines as an ineffective, us-or-them intrusion on their bodily autonomy, much of the right actually rejects vaccination. So Trump moderates his position to match his supporters’.
Carlson is also advantaged by not actually having to deliver anything besides rhetoric. He doesn’t even need to deliver real solutions to the problems he claims to have identified, instead preferring to fall back on the sort of pseudoscience that is rampant in an era of trying to sell stuff to people who are “doing their own research.” It’s Goop for the MAGA set.

As part of his introductory special for season two, Carlson interviewed Andrew McGovern, a “fitness professional” who advocates tanning one’s testicles.
“Half the viewers right now are like, ‘What? Testicle tanning? That’s crazy!,’ ” Carlson said. “But my view is, okay, testosterone levels crash and nobody says anything about it? That’s crazy. So, why is it crazy to seek solutions?”
Setting aside the core question about testosterone levels here, an assertion that is not without debate of its own, let’s focus on the false equivalence Carlson draws. It’s a logical division-by-zero: If one thing is acceptably crazy, then everything crazy must be accepted. Just because he claims that this problem exists, that doesn’t mean that any random attempt to address the problem deserves elevation.

McGovern, of course, agreed with Carlson’s framing, saying that a lot of people “don’t trust the mainstream information.” That’s why Carlson does this. He’s not selling testicle tanners. He’s selling doubt.


As he ran through some of the first season’s successes, Wells, the Fox executive, pointed to an exploration of UFOs that one program had considered.
“Last season, we covered UFOs and that phenomenon,” he said. “We dived into cattle mutilations a little bit. But this season we really are investigating that, a fine-tune approach to what’s actually happening.”
Carlson says this is “a perfect story for this series” because it jumps from initial resistance to the idea that space aliens are mutilating cows to actually making people think. It’s the sort of thing, Wells said, that “if we were doing this on YouTube or some other outlet or whatever, they’d be banning it.” Since there are no weirdo UFO videos on YouTube.

But, in an interview with two guys called “The Bearded Butchers,” we see the same logic problem at play. Cows had been mutilated or cut up (a crazy thing) and therefore aliens did it (a crazy idea that must be accepted). An inexplicable thing happened and now here is one explanation that just happens to reinforce the idea that Regular Joe Americans know more than what The Officials are willing to admit.


“You ask questions about it: ‘Shut up, conspiracy monger!’ ” Carlson said of the UFO show. “And then you get a little deeper into it and you ask, like, ‘What the hell is this?’ And I think that we did that.”
That’s the point! Get people feeling isolated and guilty about their fringe beliefs and celebrate those people as correct, as embattled truth-tellers fighting the establishment.

When snippets of Carlson’s “End of Men” trailer circulated online, they often left out the part right before the testicle-tanning (and the concomitant shots of burly dudes doing tough-dude stuff). That included an unidentified individual solemnly weighing in on how the purported decline in sperm counts over the past several decades indicates that we are “headed for calamity,” something that he says is a “mathematical fact.”


Some viewers might recognize the tie-back to how the trailer opens, showing John F. Kennedy announcing his physical fitness program. The “calamity” speaker was his nephew, Robert F. Kennedy Jr.
And most readers will now say, ah. Because what Robert Kennedy Jr. is best known for these days is not his last name but his embrace of disinformation about the safety of vaccines. His efforts to sow doubt about vaccines predate the coronavirus pandemic but have blossomed during it, and citing him as any sort of authority on well-being at this moment is nothing more than a thumbing-of-the-nose at the people who actually know what they’re talking about.
And that, as well as anything, summarizes Carlson’s show.

Most watched news program on tv by democrats.
Reactions: stanzithemanzi12

In the case of carlson, it seems trying his balls made him really stupid. At least I hope he wasn't born this stupid.
Reactions: cigaretteman

The looney right, ladies and gentlemen.
Reactions: MitchLL and cigaretteman

It will be fine as long men tan their balls.
Reactions: cigaretteman

The Republican Party of Trump has gone absolutely insane.
Reactions: MitchLL and Chishawk1425

Not sure how we overcome this.
M

Tucker Carleson is so popular he interviewed Michele Tafoya(nfl sideline reporter, nobody) on a Wednesday and by Thursday there was an article in freaking Washington Post about it. Interview might have lasted 3 minutes and was a bunch of nothing. 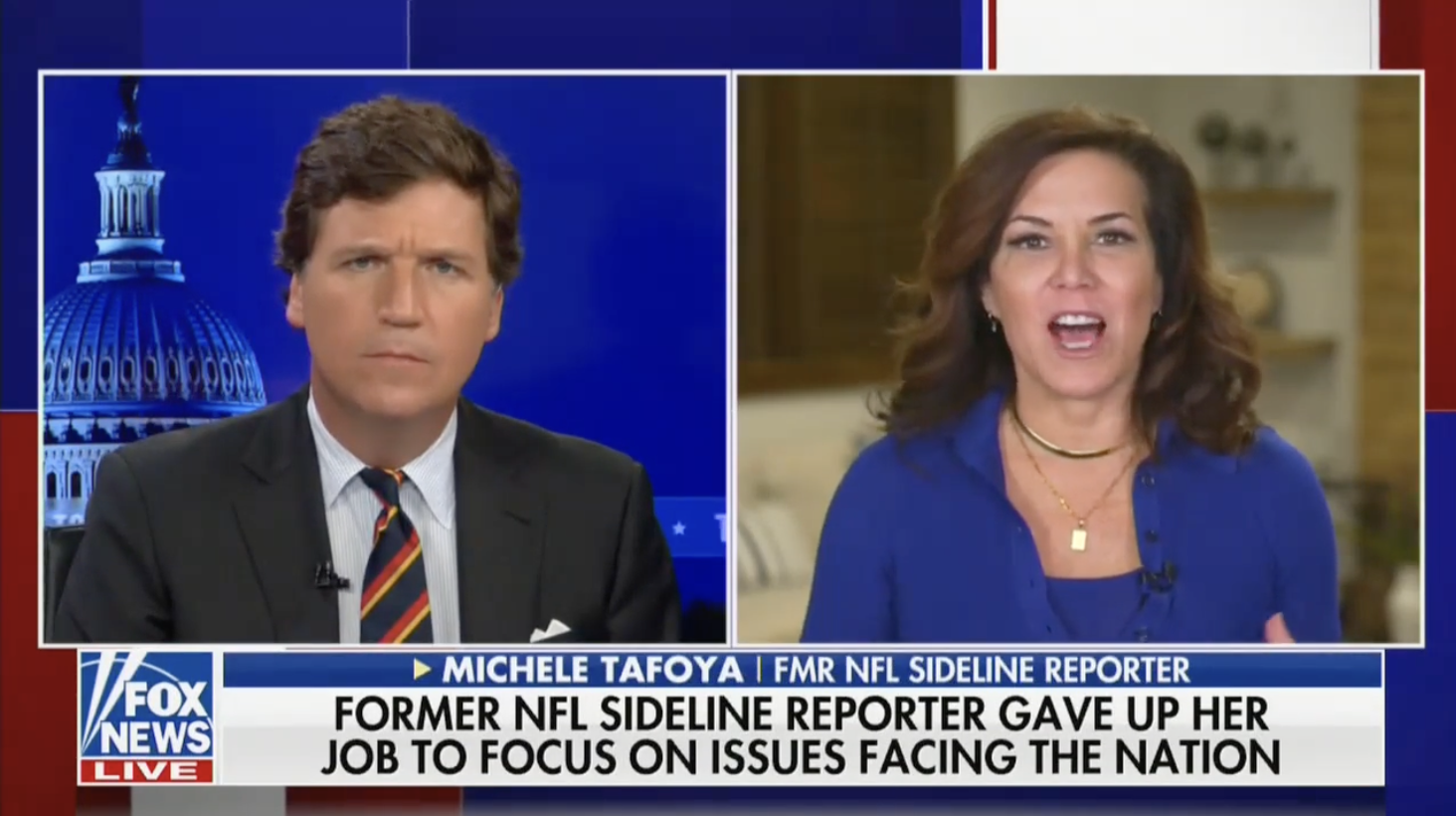 Michele Tafoya Tells Tucker Carlson Why She Left NBC Sports: ‘I'm Going to Choose to Say What I Believe’

Michele Tafoya said she left NBC Sports following a decade of NFL sideline reporting to unleash her inner “moderate,” and to join the culture discussion.

Someone needs to put him out of his misery.
Reactions: cigaretteman

Ok, gun nutter republicans…you got me. I normally say that I simply want better gun control measures in place and I don’t want to take your guns away.

This guy? I don’t want him to have guns and I want them taken away if he does have them.
Reactions: cigaretteman

Hawki97 said:
Ok, gun nutter republicans…you got me. I normally say that I simply want better gun control measures in place and I don’t want to take your guns away.

This guy? I don’t want him to have guns and I want them taken away if he does have them.
Click to expand...

Tucker Carlson: "Nixon was taken down by the deep state"; "To this day, no one can explain Watergate"...