U.S. Sen. Chuck Grassley said he believes Republicans have good Senate candidates and will win enough seats to control the chamber in the November elections, as a dust-up in party leadership prompted questions over its chances in the midterms.


“I think we’ve got good candidates all over,” Grassley told reporters Wednesday. “And I believe that we're going to take control of the United States Senate.”


The Iowa Republican, who’s seeking his eighth term in the Senate, would be president pro tempore of the Senate and likely would chair the Judiciary Committee if he wins and Republicans take back the chamber, putting him in a powerful position over any judicial nominees.

Disagreements between Senate Majority Leader Mitch McConnell and Republican Senatorial Committee Chairman Rick Scott about the party’s candidates and tactics have swelled as the Senate returns for its pre-election session.


Speaking to reporters last month, McConnell said he thought Republicans had a better chance of winning the House than the Senate, pointing to quality of candidates as one apparent weakness, according to NBC News.


“I think there’s probably a greater likelihood the House flips than the Senate. Senate races are just different — they’re statewide, candidate quality has a lot to do with the outcome,” he said.


McConnell didn’t refer to any candidates by name, but candidates like Herschel Walker in Georgia and Mehmet Oz in Pennsylvania have faltered in polling after starting the summer in a more competitive spot.


The sentiment prompted blowback from Scott, who leads the GOP’s Senate campaign arm. Last week, he wrote in an op-ed that Republicans trash-talking their party’s candidates was “treasonous” and went after what he called the “D.C. crowd” for doubting Republican voters. However, he told multiple media outlets this week his remarks were not directed at McConnell.


Grassley said cohesion in the Republican Party is necessary to win the chamber in November.

“Republicans, in order to win the United States Senate, all 50 of us have to work in a teamwork fashion,” he said Wednesday.


Perception of Republicans’ chances to win control of the Senate has waned in recent months, as a string of legislative victories from Democrats and reaction to the overturning of Roe v. Wade has pushed support i[ for Democrats.


The elections news website FiveThirtyEight predicts Democrats have a 70 in 100 chance of holding onto control of the Senate, up from 50 in July. Republicans are favored to win the House.


Grassley faces Democratic challenger Mike Franken, a retired U.S. Navy admiral from Sioux City, in the Nov. 8 election. The seat is rated as “solid Republican” by the Cook Political Report.


In the most recent Des Moines Register/Mediacom Iowa Poll in July, Grassley had an 8-point advantage over Franken, 47 percent to 39 percent. It was Grassley’s narrowest margin in the poll since he won his first Senate election in 1980. 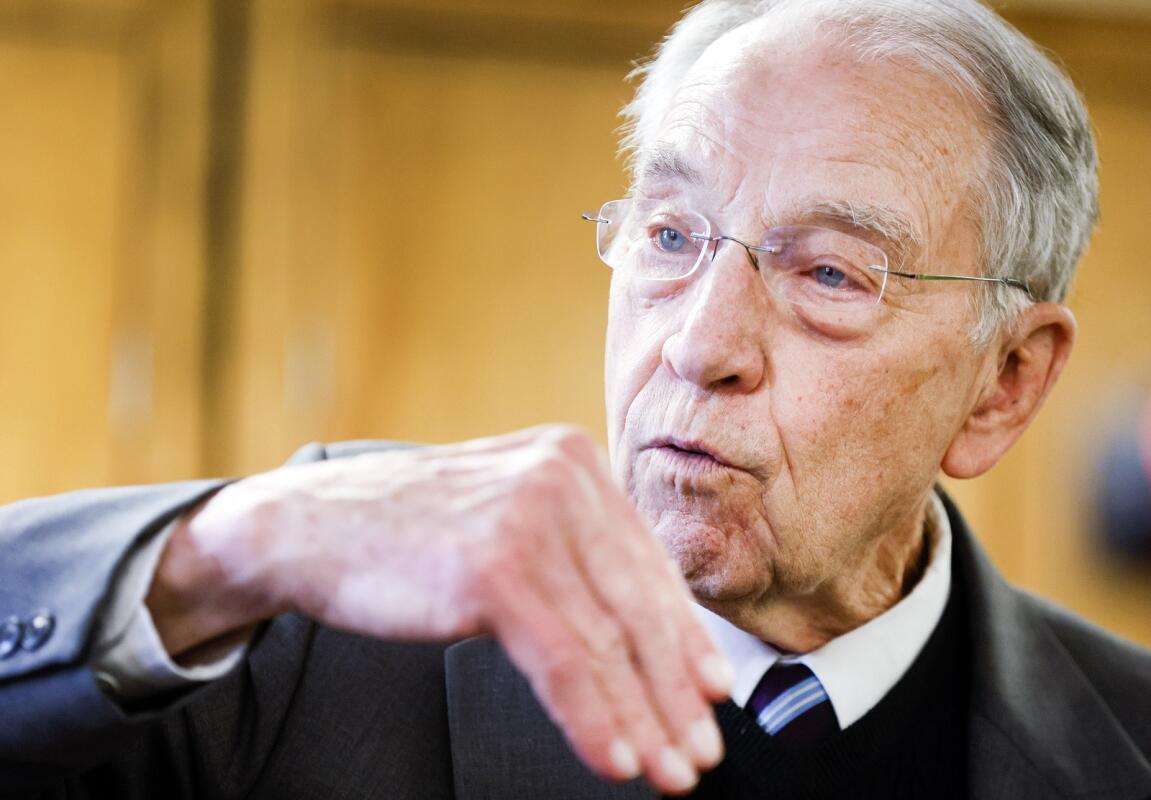 I suppose they do look good to grassley. They are mostly braindead but not yet senile.
Reactions: nelly02, mthawkeyes, Huey Grey and 1 other person

Well, he sounds very satisfied with the miracle vitamins that he bought from Mehmet Oz, never read the bizarre emails of Blake Masters, and he's never had a pistol jammed into his face by Herschel Walker. I'm not even sure those are the worst of the bunch. JD Vance slammed Trump until he flipped and became a Trump gobbler.
That's what Chuck has been reduced to. A decent senator 30 years ago who is just clinging desperately to his power.
Reactions: nelly02, mthawkeyes, cigaretteman and 1 other person
F

C'mon, Grassley has no idea who or how many cons are running where this year. All he knows someone told him there is an election in Nov.
Reactions: cigaretteman

Did Chuck say this...or did he have someone release the statement from his office. Grassley is incapable of speaking coherently any more.

Good candidates is you wear a KKK hood or fly a Nazi flag. GOP is a cesspool.
Reactions: nelly02
You must log in or register to reply here.

Grassley makes a dig at Trump

Who Will Win the Battle for Congress? Four Scenarios.