Severe storms to pose risks to 5M people in South​

The same storm responsible for unleashing an expansive area of travel-snarling snow and ice from Texas to Maine will pack enough of a punch to ignite the threat of severe thunderstorms farther south and east. AccuWeather meteorologists say that about 5 million people across southeastern Louisiana, Alabama, Mississippi and the western Florida Panhandle could face severe weather dangers into Thursday night.

A clash of cold, brisk air surging southward and springlike warmth moving northward will set the stage for feisty thunderstorms to ignite across the region.

Heavy rain and thunderstorms had already blossomed in portions of the South on Thursday morning, a sign of the potency of the weather system moving through. Temperatures across the region had surged into the 60s and 70s F by mid-morning. By 12 p.m. CST, a tornado watch had been issued for southern and eastern portions of Mississippi and western and central portions of Alabama.

At least one person is dead and multiple are injured after a radar-confirmed tornado tore through Hale County, Alabama, on Thursday afternoon.

As warm and humid air is drawn northward ahead of a powerful cold front, severe thunderstorms can fire up across part of the Gulf Coast states into Thursday night, according to AccuWeather Meteorologist Brandon Buckingham.

Cities such as New Orleans, Louisiana; Gulfport, Hattiesburg and Meridian, Mississippi; Mobile, Montgomery and Birmingham, Alabama; and Pensacola, Florida; will lie within the zone where conditions could turn stormy and potentially dangerous.

AccuWeather meteorologists say there may be enough turning of the winds in the atmosphere to also lead to the development of a few tornadoes.

Late afternoon and evening commutes along stretches of interstates 10, 20, 55, 59 and 65 could be slowed significantly due to downpours reducing visibility. Along secondary roadways, motorists will need to be wary of the potential for downed trees and power lines blocking their path.

Even in the absence of any severe weather, downpours produced by the showers and thunderstorms can lead to localized flooding.

Flash flood watches are in effect from the central Alabama to northern Georgia, central and eastern Tennessee and into West Virginia due to the anticipated heavy rainfall. Rain amounts can range from 1-3 inches with locally higher amounts possible in this corridor.

The threat of severe weather may linger past the evening hours in portions of Alabama and the Florida Panhandle, but for most of the region, repeating thunderstorms raising the risk of flooding will be the greatest risk during Thursday night.

Behind the stormy weather, high temperatures on Friday can plunge by as much as 25 degrees Fahrenheit from Thursday. Those left without power from the storms will face chilly days in the 40s and lower 50s into Saturday and even colder nights.

It's supposed to get down to 7 in ABQ tonight. Gonna freeze my tamale off.
Reactions: NDallasRuss

P'cola fixen to get hit
Reactions: The Tradition

I can’t fap to this
Reactions: Jimmy McGill, MuscoHawk, runkpanole and 1 other person

QChawks said:
I can’t fap to this
Click to expand...

What if I showed you this? 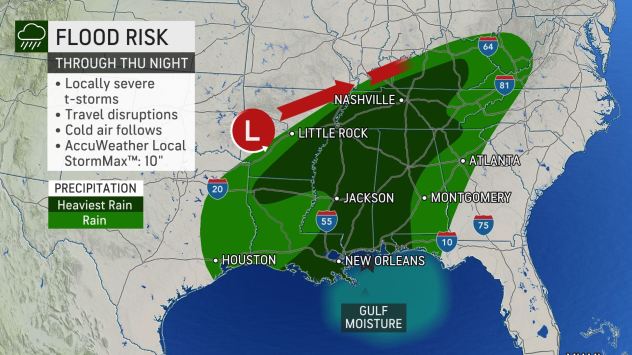 That "gulf moisture" gets me all hot and bothered.
Reactions: GOHOX69 and NDallasRuss

QChawks said:
I can’t fap to this
Click to expand...

Smartwool socks and dl the good shit. You got this brotha!

Reactions: ping72, GOHOX69, Thunderlips71 and 3 others

I think I will go to my area nightclub and tell the gals there they need not dress scantly clad anymore because apparently a lot of men get off on the weather report and certain river bridges.
Reactions: GOHOX69, noleclone2, NDallasRuss and 1 other person

Reactions: Jimmy McGill and The Tradition

Reactions: ping72
You must log in or register to reply here.

I don't want to hear any more bitching about the cold weather....

Alabama is a dump