The nearly 17 million Americans who received the one-shot Johnson & Johnson coronavirus vaccine are less protected against serious illness and hospitalizations than those who got the Pfizer-BioNTech and Moderna shots, according to federal data released Tuesday.

The latest data suggest Johnson & Johnson recipients should get a booster with one of the messenger RNA vaccines, if they haven’t already done so — and even consider a second messenger RNA booster for the greatest protection. The data come from a Centers for Disease Control and Prevention report that analyzed the results of mix-and-match vaccine-and-booster combinations during a four-month period when the highly transmissible omicron variant was dominant.
Even combining a Johnson & Johnson vaccine with a booster of either Johnson & Johnson, or one of the two messenger RNA vaccines, wasn’t as strong as three shots of the messenger RNA vaccines in preventing emergency room visits or hospitalizations, according to the report.
What to know about the omicron variant and subvariant BA.2
The results confirm what health officials and scientists have known for some time based on earlier research. But the study is important because vaccine effectiveness data on the mix-and-match booster strategies in the real world has been limited.


The new data, from a 10-state study conducted by independent researchers, may provide clarity amid a confusing stew of data about the single-dose vaccine. It shows that three doses of a messenger RNA vaccine perform the best, while a Johnson & Johnson vaccine followed by a messenger RNA booster shot is next best. Two shots of Johnson & Johnson provide a lower level of protection, with a single shot just 31 percent effective against hospitalization.

“That’s too low, especially in this world where we have access to other things,” said Natalie E. Dean, a biostatistician at Emory University’s Rollins School of Public Health. “One priority is making sure that people who only received one dose [of Johnson & Johnson vaccine] are aware that they should go and get, preferably, a messenger RNA vaccine.”
The data also suggest a second boost with a messenger RNA vaccine may need to be considered, even for individuals who have received two doses of Johnson & Johnson, said Boghuma Titanji, an infectious-diseases expert at Emory University. “This is not yet a formal recommendation,” Titanji said, “but is something individuals who fall in this category should discuss with their health-care provider.”

The takeaway: “If you can get the messenger RNA vaccine series, and especially get one as a booster, this [study] confirms that is the way to go,” said Jeanne Marrazzo, director of the Division of Infectious Diseases at the University of Alabama at Birmingham.
Experts said the latest CDC study underscores what some experts say is a critical need for clearer recommendations on boosters.
Last fall, the CDC gave Americans eligible for boosters the choice of any one of the three vaccines, regardless of their original shot. In December, however, the agency updated its guidance to recommend people get the messenger RNA vaccines over Johnson & Johnson because of concerns over the an extremely rare but potentially fatal blood clot issue.

“Right now, there aren’t recommendations for people who got two doses of J & J to get a third messenger RNA shot,” said William Moss, executive director of the International Vaccine Access Center at the Johns Hopkins Bloomberg School of Public Health. (Those who are moderately to severely immunocompromised are already recommended to get a third dose.) “The messenger RNA vaccines seem to be providing more protection … What I’d like to see is a very simple recommendation: that everyone get three doses, and they should be messenger RNA vaccines.”


Several studies have shown the Pfizer and Moderna vaccines remain highly effective at preventing the worst outcomes from infections even as protection against less severe illness waned over time.
Although the Johnson & Johnson vaccine provides a lower level of initial protection than the messenger RNA vaccines, the company has pointed to evidence that its vaccine’s protection may not erode as quickly.

A study funded by the division of Johnson & Johnson that developed the vaccine and published in JAMA Network Open found that vaccine effectiveness was stable over six months — 81 percent effective at preventing hospitalization, though it measured a period before the omicron variant’s emergence.
“If there’s something we’ve learned in the pandemic — and it’s not a new lesson — the most informative papers come from people who are independent of the study,” said John P. Moore, a professor of microbiology and immunology at Weill Cornell Medicine.


Moss said it’s important for the public to keep in mind that the goal of vaccination is to prevent severe disease and death. But public messaging became muddled, he said, in part because early studies showed the messenger RNA vaccines provided protection against infection, raising “false expectations.”

It’s natural for the levels of virus-fighting antibodies in the blood to wane over time, Moss added. That’s part of the design of the body’s immune response. “Otherwise our blood would be chock full of antibodies and [blood] wouldn’t be able to flow … and deliver oxygen to the cells,” he said.
The CDC study analyzed data from more than 80,000 emergency room or urgent care visits, and more than 25,000 hospitalizations among adults with covid-19-like illness in 10 states, from mid-December to March 7, a period which includes the omicron variant surge.


When researchers compared the effectiveness of several vaccine combinations in preventing emergency room or urgent care visits, they found:

When the Food and Drug Administration authorized Johnson & Johnson’s vaccine in February 2021 for all adults, many believed the one-and-done approach would make it a tool to vaccinate the world. But last spring, federal officials halted the use of the vaccine for 10 days, while they looked into reports of six cases of an extremely rare but potentially life-threatening type of blood clot among the millions of people who had received the shots in the United States. The vaccine’s use waned thereafter, due to supply problems, as well as concerns over the clotting issue.
Nine deaths — among seven women and two men — have been confirmed in connection with the blood clot issue through September. Seven of those patients, who ranged in age from 28 to 62, had underlying medical conditions, including obesity, hypertension and diabetes.

I recently saw some additional evidence suggesting Moderna might be better than Pfizer - especially against different variants.

Raising the question whether it might be smart to switch from P to M for your next booster.

Sounds like blood clots are a major concern for the J&J shot as well.

On the other hand...

When the early Covid vaccine trial results came out, an important indicator of success couldn’t yet be assessed: durability.

Those initial studies were just three to four months — too short to determine how long protection lasts. But now, that question is gaining renewed attention as public health officials weigh the possibility of fourth doses of Pfizer’s and Moderna’s vaccines.

This week, each company asked the FDA to authorize additional boosters — Pfizer for people over 65, and Moderna for all adults. At the same time, a study published Thursday in the journal JAMA Network Open estimated that a single Johnson & Johnson shot was 76 percent effective at preventing Covid infection and 81 percent for hospitalizations for at least 180 days.

The study aligns with data from the Centers for Disease Control and Prevention showing that from late December through Feb. 19 (the most recent data available), the weekly rate of breakthrough cases was lowest among people who got the J&J shot. The rate of Covid deaths among J&J recipients, however, was a bit higher than among those who got mRNA vaccines through Jan. 29.

Together, this evidence suggests the J&J shot might have an edge in durability over the two mRNA vaccines. None of the more than 422,000 J&J recipients in the recent study got boosters during the research period, which ended in August.

"The durability was not influenced or weakened by the delta variant," said Sebastian Schneeweiss, a co-author of the study and the vice chief of Brigham & Women’s Hospital’s division of pharmacoepidemiology and pharmacoeconomics.

"We also are not saying it’s limited to 180 days," he said, noting that was just the data available, which came from insurance claims.

A spokesperson at Janssen, J&J’s pharmaceutical arm, said in a statement that "the results add to a growing body of evidence, including provisional data from the U.S. Centers for Disease Control and Prevention, indicating the Johnson & Johnson Covid-19 vaccine provides durable protection against breakthrough infection, Covid-19-related hospitalization and death."

Dan Barouch, director of the Center for Virology and Vaccine Research at Boston’s Beth Israel Deaconess Medical Center, thinks a clearer picture is emerging of the Covid vaccines' differing properties.

Studying durability, of course, is crucial in determining whether booster shots are needed, and when. 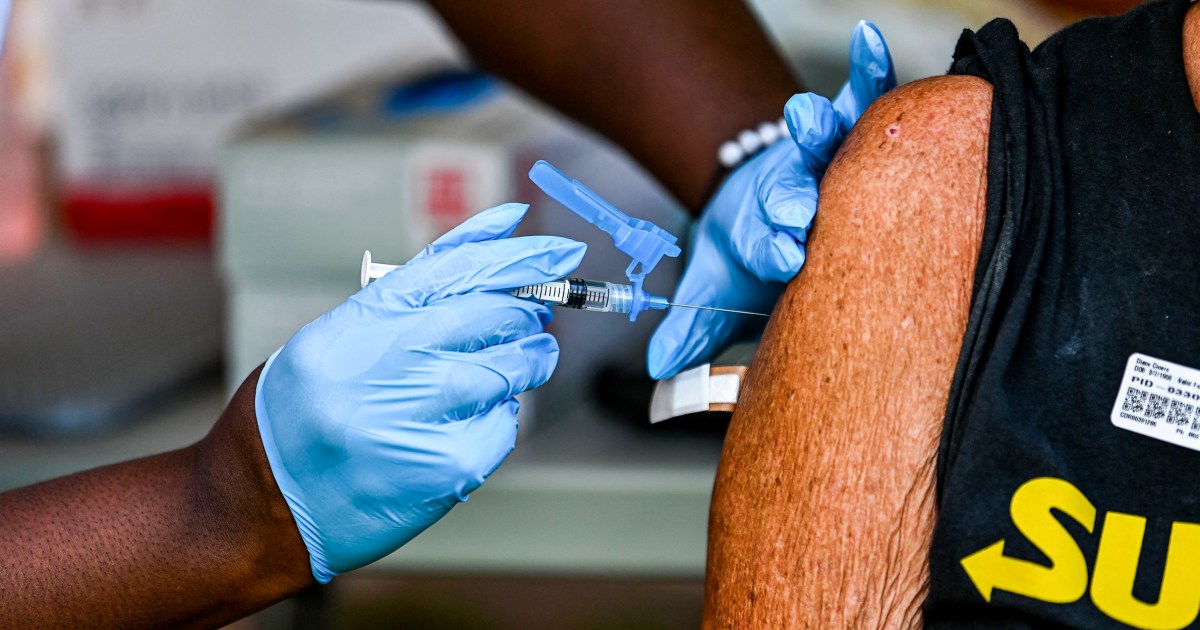 As picture of Covid vaccine durability gets clearer, J&J makes a strong showing

This week, Pfizer and Moderna asked the FDA to authorize fourth doses of their vaccines. Meanwhile, a new study shows protection from one J&J shot lasts at least six months.

I'll take my chances with Covid thank you very much...

This descriptive study compares the effect of mRNA-based COVID-19 vaccination with BNT162b2 (Pfizer-BioNTech) vs mRNA-1273 (Moderna) on the reported cases of myocarditis in the US after each vaccination dose.

red/green hawk said:
I'll take my chances with Covid thank you very much...

This descriptive study compares the effect of mRNA-based COVID-19 vaccination with BNT162b2 (Pfizer-BioNTech) vs mRNA-1273 (Moderna) on the reported cases of myocarditis in the US after each vaccination dose.

Which causes myocarditis at a higher rate than the vaccine.

Colonoscopy said:
Which causes myocarditis at a higher rate than the vaccine.

Does Covid cause myocarditis at a higher rate? If so, you get the shot and get covid your risk of myocarditis increases exponentially then?

Colonoscopy said:
Which causes myocarditis at a higher rate than the vaccine.

Pretty sure he has no clue when it comes to probability analysis, but I'd sure love to meet him across a poker table
You must log in or register to reply here.