You can’t escape the sight of Abraham Lincoln in Springfield — whether it be at his presidential library and museum, statues in front of both the Illinois State Capitol and the Old State Capitol — or even on the obligatory portraits on the walls of your hotel room.


But the city has been slow to pay tribute to the other U.S. president who made history in the state’s capital — Barack Obama.

The downstate city took a step to rectify that slight on Wednesday, placing a historic marker outside the Old State Capitol, where the Chicago Democrat kicked off his trailblazing presidential bid 15 years ago.


“To me, this marker is a reminder that one of our favorite sons brought a message of hope that resonated at a crucial time to people all across the world,” Gov. J.B. Pritzker said in the Old State Capitol’s historic Hall of Representatives. “Here in the Land of Lincoln, in the home state of Barack Obama, our people will never stop believing that a better future is possible.”

Located just blocks from the current statehouse, the Old State Capitol was home to the Legislature from 1840 to 1876. Lincoln served there in the Illinois House, and in 1858, he accepted the Republican Party nomination for the U.S. Senate in the Hall of Representatives, delivering his famous “House Divided” speech.

“A house divided against itself cannot stand,” Lincoln told the Illinois Republican State Convention on June 16, 1858. “I believe this government cannot endure, permanently half slave and half free.”

Nearly a century and a half later, then U.S. Sen. Barack Obama stood on the steps of the Old State Capitol on Feb. 10, 2007, and launched the campaign that would end in him becoming the nation’s first Black president.


When he spoke that frigid day, Obama remembered his time in Springfield, where he served three terms in the Illinois Senate from 1997 to 2005.

“It was here, in Springfield, where North, South, East and West come together that I was reminded of the essential decency of the American people — where I came to believe that through this decency, we can build a more hopeful America,” Obama said on the Capitol lawn in blustery 10-degree weather.


“And that is why, in the shadow of the Old State Capitol, where Lincoln once called on a house divided to stand together, where common hopes and common dreams still live, I stand before you today to announce my candidacy for president of the United States of America.”

Obama returned to the Old State Capitol in August of 2008 to introduce then Sen. Joe Biden as his running mate.


Commemorating both of those historic visits, the new historic marker stands outside the Old State Capitol, but unlike Obama, Pritzker and the other officials who unveiled it on Wednesday chose to make their remarks indoors.

While his tribute still fell far short of the Lincoln remembrances, Obama has not been forgotten in the state capital.


The following year, state legislators put up a marker commemorating Obama’s 2016 speech to lawmakers in the Illinois House, a speech in which Obama asked them to try to work to end the state’s historic budget impasse.

And part of Interstate 55 between I-294 and Pontiac has been named for Obama.

Following rumblings of some commemoration at or near the site of Obama’s historic 2007 speech, the Old State Capitol Foundation and the Illinois Department of Natural Resources announced in February the plan for the historical marker.


Chicago, of course, is where Obama launched his political career and chose to build the Obama Presidential Center. Ground was broken for the center in the South Side’s Jackson Park neighborhood in September 2021.

But speaking at Wednesday’s commemoration, Michael Strautmanis, the Obama Foundation’s executive vice president of external affairs, said Springfield “holds such a special place in the heart of President Obama.”


“It was Springfield where he came together and started to pass legislation to make a difference in the lives of people across the state of Illinois,” Strautmanis said.

“But it was also a place where he learned a lot of lessons that stayed with him all throughout his presidency and that we’re bringing into our work with the Obama Foundation. That lesson that no matter where you come from, no matter what you look like, you can find common ground with others and that you can come together and create solutions that will improve peoples’ lives.”

The Illinois Department of Natural Resources said conversations about the marker began with the Obama Foundation and the Old State Capitol Foundation “two or three years ago.”

“The Old State Capitol from the beginning recognized the historical importance of the announcements and has honored President Obama from the moment they occurred,” spokeswoman Jayette Bolinski said.

“Site staff were actively collecting items they knew would have significance and made them part of their collection. That’s why they have signed speeches from Obama and Biden, the podium that was used, signs from the events and more.

“History doesn’t always move quickly, but it should move thoughtfully and deliberatively.” 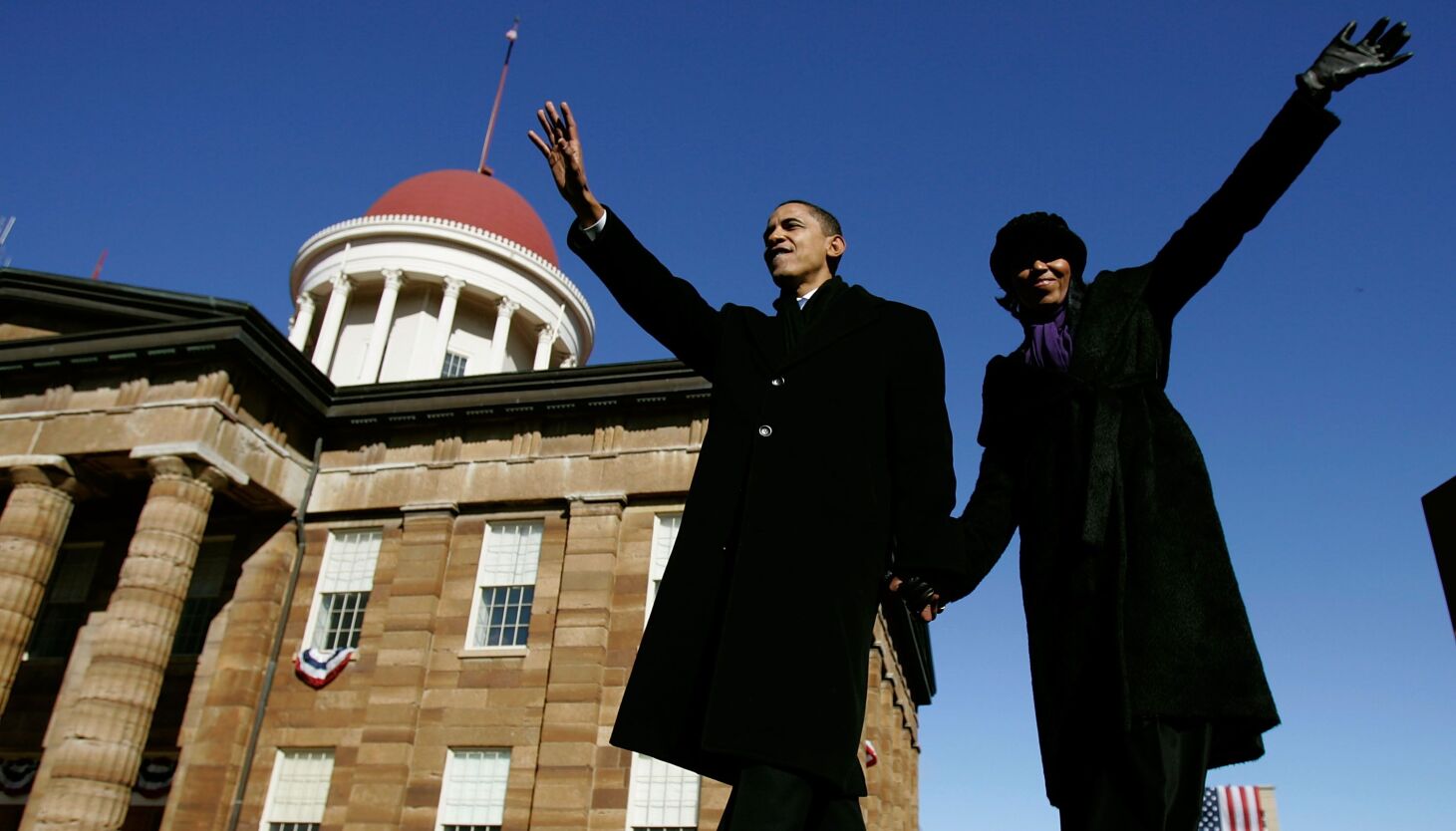 The new historic marker stands outside the Old State Capitol, where then Sen. Barack Obama launched his presidential bid on a brutally cold February day in 2007 —but unlike Obama, Pritzker and the others who unveiled the marker on Wednesday made their remarks indoors.

Sorry I missed the event...
You must log in or register to reply here.

Donald Trump Isn’t the Only One to Blame for the Capitol Riot. I’d Know.