Wiskus, who lives in rural Lisbon, is the Democratic nominee in Senate District 42, which encompasses much of rural Linn County and Benton County. She was driven to run by her opposition to carbon pipelines, including the Wolf Carbon Solutions pipeline running from the ADM ethanol plant in Cedar Rapids through Eastern Iowa, affecting her rural neighbors.

Wiskus opposes using eminent domain authority to seize her neighbors’ land for the pipeline. She’s raised safety concerns about the possibility of a rupture and questions the multibillion-dollar projects’ purported role in fighting climate change.

Last month, she met with members of the Hawkeye Labor Council in Cedar Rapids as part of the group’s endorsement process. She went in knowing that unions support the pipeline projects, which could create union jobs.

“I spoke about the CO2 pipelines because I realized that’s the gorilla in the room,” said Wiskus, who hoped to explain her position. She brought handouts with information and data.

“When I started speaking, one gentleman tore up the handout and threw it on the floor,” Wiskus recalled.

She received few questions and comments, mostly from members of Plumbers and Pipefitters Local 125. They told Wiskus her stance would take food off their families’ table. She doesn’t understand labor, she was told. The pipelines were the only issue that came up.

So the labor council has recommended that Wiskus’ opponent, Republican state Rep. Charlie McClintock of Alburnett, receive the Iowa Federation of Labor’s endorsement. The endorsement won’t be official until federation delegates from across Iowa convene later this week.

Unions, including the Hawkeye Labor Council, pipefitters, Iron Workers Local 89 and the AFL-CIO have contributed $1,650 to McClintock’s campaign so far.

Of course, this is unusual for an organization that generally supports Democrats.


Moyle pointed out that the IFL endorsed McClintock in a three-way Republican primary that he won by just two votes.


“Charlie has been with us the last two sessions. He went against his own caucus voting with labor,” said Moyle, who contends McClintock is the only Republican who reached out to unions during the John Deere and Ingredion strikes. He’s attended labor events.


What about the carbon pipelines?


What’s McClintock’s stance on the pipelines and eminent domain? I reached out to him by email but, as of this writing, I’ve received no response.


These projects are mainly meant to help the ethanol industry market its corn-based fuels as more environmentally friendly. Never mind that the intensive row crop agriculture needed to meet demand for ethanol is no friend of the environment, particularly Iowa’s dirty water.


Also on board with Summit is former Reynolds chief of staff Jake Ketzner. Reynolds appointed all three members of the Iowa Utilities Board, which will make the final call on the projects and the use of eminent domain. The Republican majority Legislature declined to take any action this year to put the brakes on using eminent domain for private projects.


Democratic President Joe Biden came to Iowa in April to announce he would encourage more E15 use and tout biofuels. Then there’s the Inflation Reduction Act, the signature achievement of the Democratic Congress, which includes billions of new spending on efforts to address climate change. A big chunk of that money will pay for a large increase in the federal per-metric-ton subsidy for carbon capture and storage, boosting the credit from $50 per-ton to $85. It will surely provide a financial incentive for many more pipeline projects.


But is this really the best use of billions of dollars targeting climate change, allowing industries to conduct business as usual while the government pays them to suck up carbon? Some of that sequestered carbon may be used to extract even more oil and gas through Enhanced Oil Recovery.


“These subsidies create a perverse incentive, because for companies to qualify for the subsidies, carbon dioxide must be produced, then captured and buried. This incentive handicaps technologies that reduce carbon dioxide production in the first place,” wrote Charles Harvey, a professor of environmental engineering at MIT, and Kurt House, CEO of KoBold Metals, a metals extraction business, in a recent New York Times op-ed.


“We need to stop subsidizing oil extraction and carbon dioxide production in the name of fighting climate change and stop burning billions in taxpayer money on white elephant projects,” they wrote.


Meanwhile, back in rural Linn County, Wiskus is left to wonder why labor unions and others on her side of the partisan fence don’t care about her neighbors and their property rights.


“This is about community standing together and looking out for the common good,” Wiskus said. “It’s the little guy vs. the giant corporation. Do we have rights anymore?


“They’re wondering who is going to stand up for us. That’s what I’m doing,” Wiskus said.


Iowa voters tend to value private property rights. Democrats and their allies may be missing a golden opportunity to finally reconnect with rural voters who care about their communities and the environment far more than ethanol. 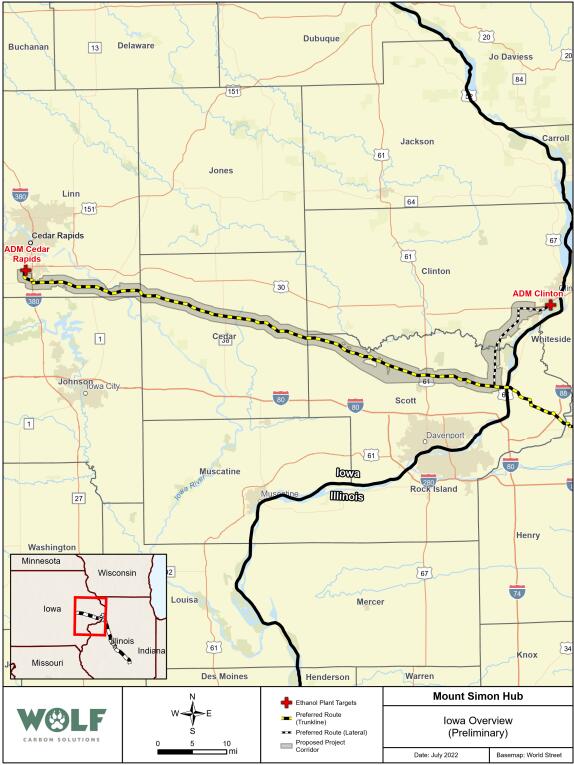 Never mind that the intensive row crop agriculture needed to meet demand for ethanol is no friend of the environment, particularly Iowa’s dirty water.

Thanks for posting this. I hope everybody reads this and give it serious thought. The last paragraph is golden.

----------
The following paragraph does not tell the whole story. There was legislation proposed in the Iowa Senate to eliminate the use of eminent domain in the state of Iowa. Reynolds called the leaders of Iowa Republican Senate members and told them to shelve it. Which they promptly did.
Iowa is one of the few states to allow use of eminent domain by private interests.


(Also on board with Summit is former Reynolds chief of staff Jake Ketzner. Reynolds appointed all three members of the Iowa Utilities Board, which will make the final call on the projects and the use of eminent domain. The Republican majority Legislature declined to take any action this year to put the brakes on using eminent domain for private projects.)
Reactions: cigaretteman
You must log in or register to reply here.

Republicans, tell us what rural Iowa has won