In post-Roe America, pilots take the abortion battle to the skies

From 1,800 feet in the air, the pilot of this tiny, four-seater plane points to a stretch of land marked by a smattering of farms and one arterial road.


“That’s the Wisconsin border,” he says. “Doesn’t look like much from up here.”

But that sliver of land now marks a barrier between legal and illegal abortion care after the Supreme Court overturned Roe v. Wade.


The pilot is part of a growing network of pilots who, through a fledgling Illinois nonprofit, are volunteering time, equipment and expertise to help connect people with abortion care. But there are risks, too, from antagonism and harassment from anti-abortion groups to potential legal threats, which is why the pilot asked that his name not be used in this story.

“Pilots take tremendous pride in the freedom we have to fly,” he says. “I can fly anywhere I want to. I don’t have to file a flight plan. I don’t have to talk to air traffic control. It felt right to use these freedoms to help someone whose freedoms are being threatened.”

The pilot, who is in his mid-50s, is one of nearly 1,000 volunteer hobby pilots who have offered to fly with Elevated Access, an Illinois nonprofit established in April after signs began to point to the U.S. Supreme Court reversal of Roe v. Wade. The nonprofit was founded by a former IT manager and pilot named Mike; like the pilot I flew with on a windy November morning, he gives only his first name for personal safety reasons.

The idea for a volunteer organization that would transport women seeking abortion care, and physicians who provide it, to states where it is safe and legal to do so, began with a volunteer stint Mike did at Midwest Access Coalition.

“As a pilot, I was looking for some way that I could use my skills to help people,” he says.

There is an increasing need for that kind of service, says Alison Dreith, director of strategic partnerships for the coalition. States such as Illinois, where abortion remains legal, expect up to a two-thirds increase in patients traveling from states that ban or heavily restrict the procedure. Over the past six months, Dreith, who is based in southern Illinois, has taken panicked calls from Wisconsin, Louisiana and even Texas.


“I absolutely never imagined we could use private pilots, and it came just in the nick of time for the healthcare crisis we’re in,” Dreith says. “That’s the beauty and the sadness of Elevated Access.”

Recently, Dreith connected Mike with a Louisiana woman whose ride had canceled hours before her appointment at an abortion clinic in Kansas. Dreith looked into plane tickets, but they averaged nearly $1,000 and included several connecting flights.

That’s when she called Mike. He told Dreith about a pilot in Arkansas who might be able to help once the woman reschedules her appointment. (The two are still working out the details.)

One benefit of tiny planes is they can land at tiny airports. Residents of rural Wisconsin might live hours from O’Hare or Milwaukee International Airport, but they may live just 20 minutes from a smaller regional airport.

Another is the comparatively relaxed security and surveillance. “Nobody’s asking you why you’re there,” says Mike. “You don’t have to go through security. There’s no tickets, there’s no baggage check. You don’t even have to tell them your name. All they need to know is your weight.”

Still, flying for an organization like Elevated Access comes with risk, says Mary Ziegler, a law professor at the University of California, Davis and an expert in the current legal twists and turns of the American abortion debate.

Those risks echo a debate currently unfolding on the ground. Some fear, for example, that Texas residents could pursue civil litigation against anyone who aids or abets Texans who seek abortion care – not only within the state but outside of it, too. Already, nonprofit groups have sued to try to block the state from taking any action beyond its borders — but the threat spotlights a questionable area of the law.

If a pilot flies from Texas to New Mexico, for example, a Texas resident could try and sue that pilot for helping transport someone to get an abortion. Whether that would hold up in court is not yet clear.


“I would describe it as calculated risk,” says Ziegler. “Pilots have to be willing to take those risks to highlight what they see as injustice. That’s often been the case in the history of abortion law. If people are not willing to take risks, nothing happens.”

Still, since June, Mike says his organization has received hundreds of inquiries from interested pilots thanks to news stories and a TikTok-savvy pilot who put out a call for volunteers. (Elevated Access thoroughly vets every pilot before bringing them on board.)

The donations have poured in, too. While Mike will not share details, he says about half of the donations are small, individual contributions of around $50, and the rest come from philanthropists.

In six months, Elevated Access has raised enough money that Mike recently quit his 20-year career at a university to work full time as the group’s executive director.

Though Mike does not reveal how many flights Elevated Access has done so far — “we don’t want to become a target,” he says — it doubled the number of flights in October from the previous month.

To protect both pilots and passengers, Elevated Access keeps passenger information completely anonymous, a model Mike equates to Uber or Lyft. “We don’t ask the purpose of somebody’s flight; we don’t need to know,” he says. The organization can fly patients, physicians, clinic staff or even supplies. “All we’re doing is providing transportation.”

Expensive transportation. The pilots not only volunteer their time, but they pick up the cost of flying, which can total hundreds of dollars for a single flight due to $7 gallons of gas.

The pilot, a high school physics teacher in Chicago, was between classes when his cellphone buzzed in late September. On the screen was a text asking if he was available on an upcoming Tuesday to make a flight from the Midwest to the East Coast.

The pilot, a hobby flier who bought his plane two years ago, said the text gave him a jolt of excitement. He’d been waiting for such a text ever since volunteering with Elevated Access in June.

“It was unmooring to suddenly be in a world where abortion was no longer a constitutional right,” says the pilot. “I read about Elevated Access and thought, this is absolutely what I want to do. It was an opportunity to push back against the political trend of the last six years.”

So, after looking at his schedule, he wrote back enthusiastically: I’m in!

The trip took close to five hours, including a brief stop for refueling. The young woman, says the pilot, slept much of the way. When he delivered his passenger to her destination, she gave him a hug and walked away.


Later that day, the pilot got back in his plane and started his journey home. He was due in class the following day.

The ending, he says, felt oddly quiet but “rewarding.”

“It would be a more coherent ending if I knew how her life was affected,” he says. “But I don’t and I won’t, so I embrace that going forward.”

Just a few minutes past the Wisconsin border, two strips of white buildings appear among a large block of farmland that has turned to a patchy quilt of yellowish brown.

Here, a 173-year-old law bans nearly all abortions, and a felony charge hangs over the heads of physicians who provide them. The airport is small. A small, heated welcoming center offers free bottles of water. Everyone is friendly, and no one asks questions.

“There are places like this all over the country,” the pilot says.

The stop is not much longer than a pit stop at a gas station along any number of highways. Soon, the pilot is back up in the air. Up here, among the birds, the law shrinks with the view. 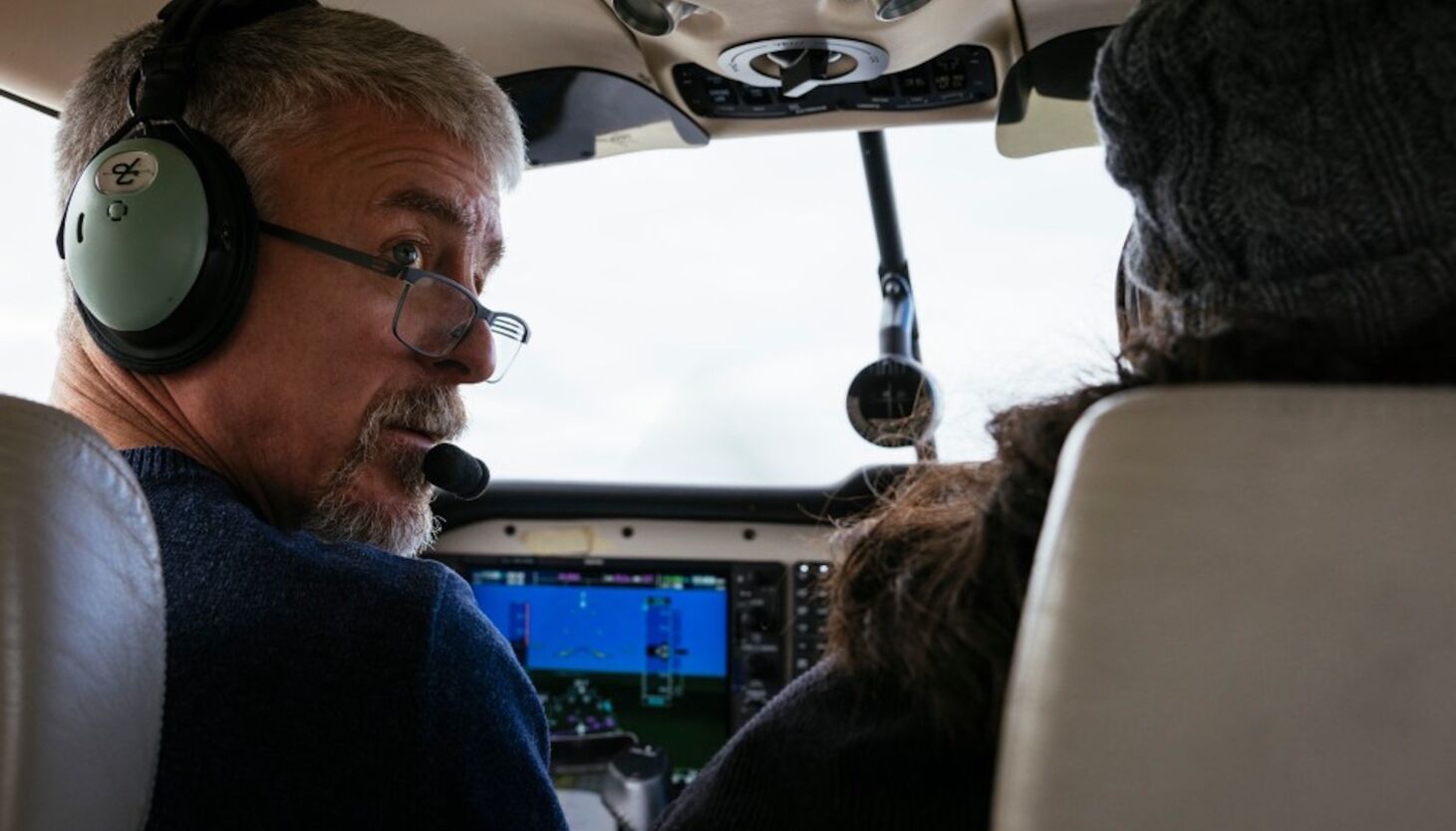 In post-Roe America, pilots take the abortion battle to the skies

Off Topic Thursday at 3:22 PM
IowaPackFan
I