Witnesses called to testify in a Georgia criminal investigation into former President Donald J. Trump and his allies have not always come willingly.
A number of them have fought their subpoenas in their home-state courts, only to have local judges order them to cooperate. That was the case with Trump-aligned lawyers John Eastman in New Mexico, Jenna Ellis in Colorado and Rudolph W. Giuliani in New York; Mr. Giuliani was also told by an Atlanta judge that he could come “on a train, on a bus or Uber” after his lawyers said a health condition prevented him from flying.
But the state of Texas is proving to be an outlier, creating serious headaches for Fani T. Willis, the Fulton County district attorney, who is leading the investigation into efforts by Mr. Trump and others to overturn his 2020 election loss in Georgia.
Last month, the Texas Court of Criminal Appeals, the state’s highest criminal court, thwarted Ms. Willis’s effort to force Jacki L. Pick, a Republican lawyer and pundit, to testify in Atlanta, saying that her subpoena had essentially expired. But in a pair of opinions, a majority of the judges on the all-Republican court went further, indicating that they believed the Georgia special grand jury conducting the inquiry may not have the legal standing to compel testimony from Texas witnesses.
Advertisement
Continue reading the main story


After the court’s ruling, two other pro-Trump Texans, Sidney Powell and Phil Waldron, did not show up for their scheduled court dates in Atlanta. And while there may be workarounds for Ms. Willis — experts say the Atlanta prosecutors could go to Texas to depose the witnesses — it looks to some Georgia observers like a pattern of Texas Republicans meddling with Georgia when it comes to the fate of Mr. Trump.

“It does seem like there’s a substantial resistance from Texas and Texans to forcing people to cooperate in ways that we haven’t seen from any other jurisdiction,” said Anthony Michael Kreis, a constitutional law professor at Georgia State University in Atlanta.
Ken Paxton, the Texas attorney general, has also weighed in, filing an amicus brief late last month along with other Republican attorneys general that supported efforts by Senator Lindsey Graham of South Carolina to avoid testifying in the Atlanta investigation. Mr. Paxton, in a statement accompanying his brief, assailed the investigation for what he said were its “repeated attempts to ignore” the Constitution.
Mr. Paxton, who is running for re-election this year despite having been indicted and arrested on criminal securities-fraud charges, has sought to intervene in Georgia before. After the 2020 election, he sued Georgia and three other swing states that Mr. Trump lost, in a far-fetched attempt to get the Supreme Court to delay the certification of their presidential electors.

By refusing to compel the three Texas residents to testify in Georgia, the court is breaking with a long tradition of cooperation between states in producing subpoenaed witnesses. All 50 states have versions of what is known as the Uniform Act, which was created in the 1930s to establish a framework for one state to compel testimony from a witness residing in another.

Ms. Willis, in a statement, said, “We expect every state to abide by the Constitutional requirement to ensure that full faith and credit is given by them to the laws and proceedings of other states. That requirement includes abiding by the interstate compact to produce witnesses for other states’ judicial proceedings.”
Ms. Willis is weighing potential conspiracy and racketeering charges, among others, and is examining the phone call that Mr. Trump made on Jan. 2, 2021, to Brad Raffensperger, the Georgia secretary of state, imploring him to “find” nearly 12,000 votes, or enough to reverse the outcome of the Georgia vote.
On Friday, her office filed paperwork seeking to compel testimony from three more witnesses, The Associated Press reported: former House Speaker Newt Gingrich as well as Michael T. Flynn, a former national security adviser, and Eric Herschmann, a lawyer who worked in the Trump White House.
Nearly 20 people, including Mr. Giuliani, have already been informed that they are targets of Ms. Willis’s investigation and could face criminal charges. Ms. Pick, a radio host and former lawyer for House Republicans whose husband, Doug Deason, is a prominent Republican donor and Dallas power broker, has also been told she is among the targets of the investigation, according to one of her lawyers, Geoffrey Harper.
She played a central role in one of two December 2020 hearings before Georgia lawmakers that were organized by Mr. Giuliani, who advanced a number of falsehoods about the election. During a hearing before the Georgia Senate, Ms. Pick narrated a video feed that showed ballot counting taking place at a downtown Atlanta arena where voting was held. 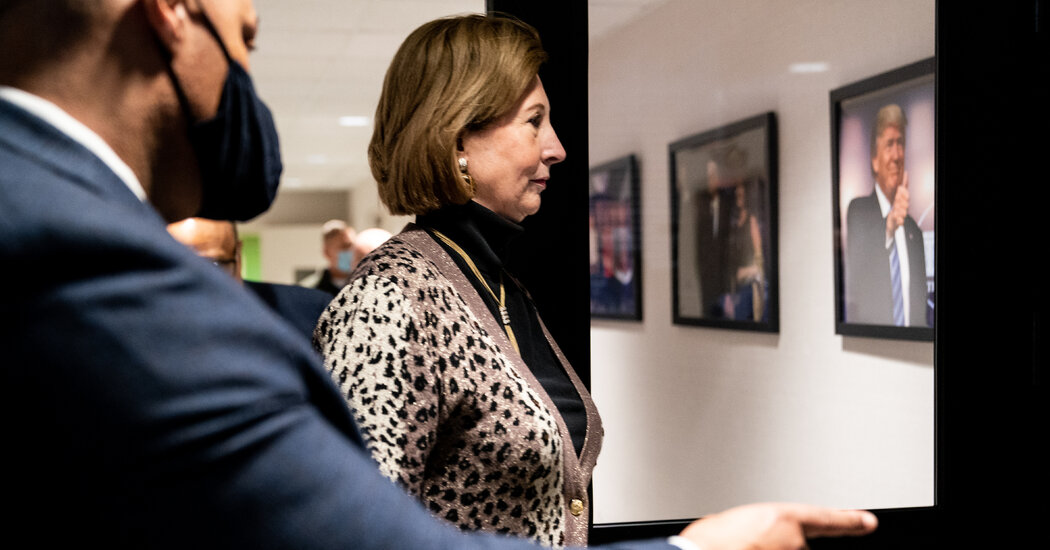 A Texas court is thwarting Georgia prosecutors’ attempts to compel testimony from Texas witnesses as part of a criminal investigation into former President Donald J. Trump.

The party of law and order, folks.
You must log in or register to reply here.

Opinion If the GOP can’t get rid of Trump, maybe Georgia’s prosecutors can