Retired Admiral Mike Franken made his closing argument Tuesday evening in Cedar Rapids in a mid-sized room in Iowa Hall at Kirkwood Community College. The Democrat spoke to around 80 supporters, first asking how many teachers, medical workers and veterans were in the room. Hands shot up.

It lacked the electricity you might expect from a homestretch campaign event for a candidate with the potential to do the unthinkable. Namely deny Republican Sen. Chuck Grassley an eighth term in the Senate. Maybe it’s the fact that most people in the room had already voted. Maybe it’s because Democrats don’t want to get their hopes up after so many bad elections.

But this has been no ordinary Senate campaign. Franken has shaped his run without “help” from national Democrats, their bucks and threadbare messaging. Maybe the Iowa Poll showing him within 3 percentage points of Grassley is fool’s gold. Or maybe Franken’s subdued confidence he can win is based on something real.

“We are strong. We look out for our neighbors. We defend democracy,” Franken said. “We deserve a strong, clear voice.”

Tonight, Grassley is set to appear with former president Donald Trump at a rally in Sioux City. It’s certain to be large and loud. The music will be pumping. The cameras will be rolling. Trump’s distortions, conspiracies and outright lies will stack up like firewood ready to be set ablaze.

Grassley likely will be on stage with the guy who lied about a stolen election, sent his supporters to march on the U.S. Capitol and allowed the mob to assault police officers, vandalize our seat of government and threaten lawmakers and his vice president for 187 minutes. Trump’s goal was stopping the certification of an American presidential election.

In the immediate aftermath, Grassley called it “an attack on democracy itself.” Now, he insists we don’t care about Jan. 6. Nothing to see here.

Once seen as a rock-solid senator with an independent streak, Grassley has proved to be just another partisan, GOP weather vane. He worked on health care reform, but then pivoted amid Tea Party agitation to claim the effort would lead to death panels that would “pull the plug on grandma.”

His actions on the Judiciary Committee to deny Barack Obama a Supreme Court nominee and help Donald Trump pack the courts, leading to the overturning of Roe v. Wade, are well known. Earlier this year Grassley claimed the IRS would hire new armed agents who would threaten Americans.


But in the end, if Grassley loses, it may simply be because he tried to stay too long. Iowans may decide seven terms is enough. “We deserve something other than a senator for life…,” Franken said.


Franken talked about a “new future for the state of Iowa.” But if he wins it may be because Iowans want to go back to a saner brand of politics which existed not that long ago. Back when carnival barkers spewing outrage and their lackeys didn’t command center stage.


But that’s probably too much to ask. Iowa is red now. Grassley likely will survive Franken’s challenge. Or maybe thoughtful Iowans will do the unthinkable. 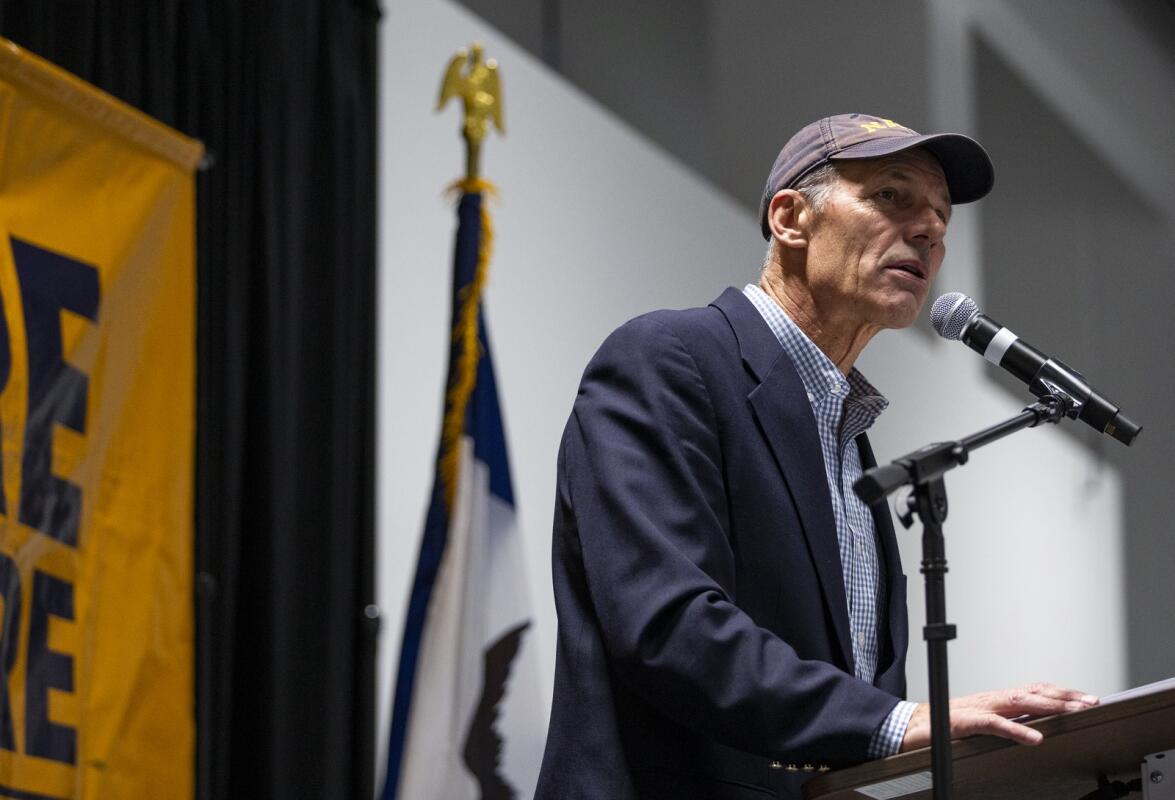 U.S. Senate nominee Mike Franken speaks about the economy during his final stop on his “Secure Our Future” tour at …