Iowa baseball: What we've learned through the first third of the Hawkeyes' 2021 season

On top of digesting the Big Ten's flawed 2021 baseball schedule, the Hawkeyes were handed few easy weekends in the early going.

Both Baseball America and D1Baseball had the same four Big Ten teams in their preseason regional projections: Michigan, Indiana, Ohio State and Maryland. Iowa (7-8) has faced those teams 10 times through its first 15 games. And the other five contests? Those came against Nebraska, which is now included in Baseball America's latest field-of-64 outlook.

Some teams stretch the strength-of-schedule argument beyond any reasonable claim when justifying pedestrian results. Iowa isn't in that situation. The Hawkeyes haven't completely sunk against the Big Ten's best — and now, there's still time for a surge as the schedule eases up.

Entering this weekend's series at Purdue, Iowa is right at the one-third mark of its 44-game conference-only slate. Here's what we've learned about the Hawkeyes so far, along with what Iowa must do to re-enter postseason conversations in the coming weeks. 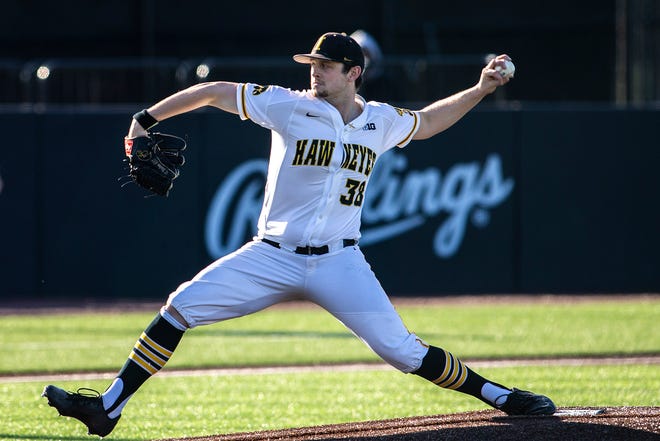 Trenton Wallace is Iowa's latest Friday ace. The rest of the rotation must match his consistency.​

With Jack Dreyer done for the year long before Iowa saw a single pitch, the Hawkeyes desperately needed Trenton Wallace to cement himself atop their weekend rotation. Wallace, who's dealt with his own injury issues since arriving in Iowa City, was about to shoulder the heftiest workload of his career.

The results have been promising through four starts.

Although Wallace sputtered in his last outing, the redshirt junior southpaw has easily been Iowa's most consistent starter, surrendering five runs through his first 21 innings with a strikeout-to-walk ratio of 2.5-to-1. Before exiting in the third inning last Friday against Ohio State, Wallace had tossed 18 2/3 consecutive scoreless frames.

What you want in a weekend anchor is an established winning belief each time he takes the hill. Iowa has that in Wallace. Now, the Hawkeyes need the rest of their rotation to catch up.

Last weekend offered the first promising evidence that a combination of Drew Irvine, Cam Baumann and Duncan Davitt will work the rest of the way. That trio had just one quality start through the first three series, then combined for three as Iowa went 3-1 in the Columbus pod. Particularly pivotal was the seven strong innings from Baumann, who's been in the program since 2018 and should be ready to provide reliable length with each outing.

Baumann didn't get a start in Iowa's only three-game series — the home-opening set against Nebraska — but the Fairfield product is back in the rotation for the West Lafayette trip. It starts with the arms if the Hawkeyes are to keep momentum flowing at Purdue.

Iowa’s RPI sits at 57, currently the highest in the conference, their SOS is #12. The RPI in baseball is very flawed, but the gold standard. If Iowa can hold serve at home and win road series here on out, they could find themselves in the discussion, especially if they get road wins @ Indiana and @ MSU. You can’t lose series to the bad RPI teams that Iowa will face at home. Hopefully they improve their RPI as well prior to playing Iowa.

My magic record for Iowa is 28-16, and go 3-3 @ Indiana/MSU and don’t tank home. No clue if the pitching is good enough but we’ll find out.
Reactions: cigaretteman
D

IowaHawkeyeFBnBB4Life said:
Iowa’s RPI sits at 57, currently the highest in the conference, their SOS is #12. The RPI in baseball is very flawed, but the gold standard. If Iowa can hold serve at home and win road series here on out, they could find themselves in the discussion, especially if they get road wins @ Indiana and @ MSU. You can’t lose series to the bad RPI teams that Iowa will face at home. Hopefully they improve their RPI as well prior to playing Iowa.

Thanks, I'm kind of in the same boat. Amazing that Iowa had to start off with the schedule it did. Kudos to Nebraska for getting out to the hot start. Iowa had a couple of tough games go against it in the early battles with the top teams. Let's see if they can get healthy (Martin, Fullard) and make some noise.
You must log in or register to reply here.

What are the trap games on the 2022 schedule for Iowa?

The Hawkeye Lounge Friday at 9:00 AM
cidsports

What a huge game in 2022 for Iowa Hawkeyes