Stephanie Herzog, a University of Iowa golfer, didn’t mention the UI or golf in her 2019 book of short stories. The 21-year-old accounting major from Minnesota self-published the book on Amazon, setting a print price of $1. Making money wasn’t the goal for Herzog, who wrote her first novel — a clump of stapled papers with terrible spelling — when she was 6.


Herzog’s 2019 book, “Bent Perspectives: A Collection of Short Stories,” might have gone under the radar, but one of her coaches promoted it on social media.


“My coaches didn’t know that promoting it was a violation,” Herzog said. “I didn’t either.”


But under new rules expected to be approved at the NCAA convention next week student-athletes would be allowed as soon as August to make money from their names, images and likenesses through endorsements, social media, book deals and other ventures.


The new rules will change the landscape for college athletes who, for decades, haven’t shared in the vast profits generated by some sports.


“For a lot of college athletes, their most valuable years are in that four to five year span to profit off of what they do,” said Jordan Bohannon, a Hawkeye point guard from Marion.

The redshirt senior has had situations where donors offer to buy him a meal or, more recently, potential sponsors approached him and Zack Cohen about sponsoring their podcast, The Standpoint. Bohannon has said no in both cases because saying yes would be a violation that could jeopardize his eligibility.


“There are a lot of little things out there that create a big situation,” Bohannon said.

State and federal bills
The name, image and likeness discussion, simmering for years, exploded in 2019 when California lawmakers passed a bill making it easier for college athletes to make money. Other states have followed suit, which put pressure on the NCAA to create national rules.


“Without the preemption, you could have 50 different laws,” he said. If one state had a really permissive law, that state could have an advantage in recruiting top athletes, Winter said. “That’s something the NCAA and the schools and conferences want to avoid.”

Violations no more?
The UI and Iowa State University each had minor NCAA violations for 2019-2020 that no longer would be violations under the proposed name, image and likeness rules.


In one case, a Hawkeye football player in December 2019 permitted Hawkeye Heaven to sell T-shirts with the student-athlete’s initials and a football character with the player’s number on it, according to the UI’s report to the Iowa Board of Regents.


“They agreed to have all proceeds go to Zach Johnson’s nonprofit organization Kids on Course,” the UI reported, referring to a Cedar Rapids-based charity named after golfer Zach Johnson. “Student-athlete was not to receive any compensation or benefits from the sale.”


When the UI found out, they sent a cease-and-desist letter asking Hawkeye Heaven to no longer sell the shirts and refund the money to purchasers. The incident also briefly rendered the football player ineligible, but he received reinstatement Dec. 20, 2019.


Pat Baird, a member of the Zach Johnson Foundation board, said board members had not heard anything about the T-shirt campaign.

At ISU, a women’s track student-athlete in June modeled clothing for two local brands started by friends, thinking if she did it for free it wouldn’t run afoul of NCAA rules.


Not only would that be allowed under the proposed name, image and likeness rules “she can even get paid for it,” Winter said.


The violation surrounding Herzog’s book would still be a violation under proposed new rules because coaches are not allowed to assist student-athletes in their name, image and likeness endeavors.


“Under the new rules, you’ll have athletes doing all types of social media endorsements, making appearances, autograph signing sessions, private lessons, camps,” he said. “The athletes are going to have to report all these things to schools and there will be many situations where athletes forget to do that. The compliance people are going to have to be checking up on that all the time.”


Neither Iowa nor ISU has signed such a deal, the schools said.

Who will profit?
Some people who oppose changes allowing student-athletes to make money from their names, images and likenesses say it will siphon money from universities, reducing funding for nonrevenue sports. Winter disagrees.


“I think it just will add to the pie,” he said. “If anything, the companies that deals with the schools will have additional deals with athletes.”

Although the proposed name, image and likeness rules prohibit athletes from using school trademarks, such as the Tigerhawk or the Cyclone logo, Winter said that may limit co-branding opportunities for universities. For example, a UI jersey with Luka Garza’s name, number and the Tigerhawk logo could make money for both the UI and Garza, Winter said.


“They would sell more jerseys if they could put his name on it,” Winter said.

NCAA minor violations
Each year, Iowa’s public universities file reports to the Board of Regents listing self-reported NCAA violations for the academic year. Here are those numbers for 2019-2020: 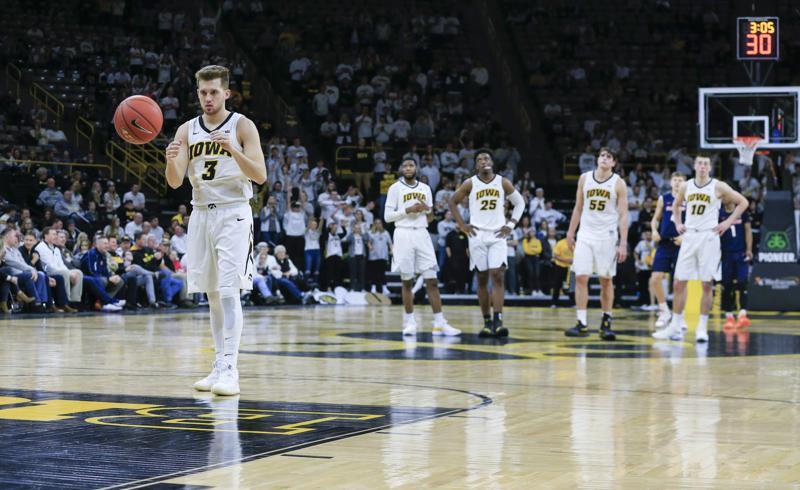 Stephanie Herzog, a University of Iowa golfer, didn’t mention the UI or golf in her 2019 book of short stories. …