Over the last two years, local elections officials across the nation have faced a deadly pandemic, shortages of funding and workers, false claims of election fraud and even death threats.


Now they could face prison, too.


Under a spate of laws proposed or passed in at least 10 states including Iowa, elections administrators could see criminal charges and penalties that levy thousands of dollars in fines or even prison time for technical infractions of election statutes.

In Arizona, a new law makes it a felony, punishable by up to 2 1/2 years in prison, followed by loss of voting rights or gun ownership, for an elections official to send a mail-in ballot to any voter who has not requested one. It's now a felony in Kentucky, with a possible five-year prison term, for an official to accept a donation or "anything of value" to assist with an election. In Florida, elections officials could face up to $25,000 in fines if they leave a ballot drop box unsupervised.


Broad new laws in Iowa and Texas make it a felony, with prison terms of up to five years in Iowa and up to two years in Texas, for elections officials who fail to follow a number of election procedures, while similar bills are pending in Alabama, Alaska, Arizona, Colorado, Oklahoma and South Carolina.


The laws are part of a broader effort to crack down on alleged voter fraud by Republican lawmakers who often echo former President Donald Trump's false claims that the 2020 election was stolen from him. No one has yet been prosecuted under these new laws, but election activity will ramp up closer to the spring primaries and November’s general election.


In fact, actual voter fraud is rare. An Associated Press review of six political-battleground states found just 475 disputed ballots out of 25.5 million cast for president, far too few to have had any impact on the outcome.


The aftermath of the 2020 election, coupled with the new laws, are making the job of elections administrator less and less attractive.


A study last summer by the reporting consortium Votebeat and Spotlight PA found that 21 elections directors or deputies in Pennsylvania's 67 counties had already quit or were planning to. Nationwide, a March survey of local elections officials by the nonpartisan Brennan Center for Justice found that one in five local administrators say they are likely to leave before the 2024 election.

Ion Sancho, the elections supervisor for 28 years in Leon County, Fla., which includes the Tallahassee capital, said the threat of a fine that amounts to half a year's pay under the state's new law has led local elections officials to reduce the number of drop-box locations and assign senior staff rather than volunteers to monitor them.


"It puts the fear of God into elections administrators, and that's what it's designed to do," he said.


Until recently, such officials toiled in anonymity. But Trump's cries of foul play led to a rise in violent threats and the online releases of personal information about the officials.


Iowa state Rep. Bobby Kaufmann, the Republican floor manager of the Iowa bill, said in a video interview that the felony provisions in the bill were inspired by three county auditors who sent out mass applications for mail-in ballots that contained pre-filled sections for name and address and other identifying information.


The mailings were perfectly legal, but the Trump campaign sued and won, resulting in tens of thousands of applications for ballots being invalidated. Such a mailing would now be a felony punishable up to five years in prison.


"The bill makes sure that any future elections official that commits election misconduct will face the same punishment that you or I or the general public would if we did the same thing," he said.


One of those county election officials cited by Kaufmann is Auditor Joel Miller of Linn County, who is running as a Democrat for the state’s top election official against incumbent Republican Paul Pate. He said the new Iowa law creates “a coercive environment for people like me in that we are running against a person that can arbitrarily bill out a technical infraction that can cost us $10,000, and criminal prosecution depending on what the alleged offense was."


In Davenport, Democratic Scott County Auditor Roxanna Moritz retired earlier than expected in April 2021 after 14 years on the job — and just five months after being reelected. She blasted local supervisors for a lack of support in the 2020 elections — supervisors accused of of paying poll workers more than authorized — and cited Iowa’s new elections law.


“She warned me that I should get my checkbook out and be ready to pay out because she assumed I would be hit with a technical infraction,” Miller said.


State laws have long spelled out what elections administrators can and can't do, including criminal penalties for election tampering. In Colorado, Mesa County Clerk Tina Peters, a Republican, and deputy Belinda Knisley face multiple charges over accusations they helped someone copy sensitive information from voting machines that was later shared online with conspiracy theorists.


At the height of the coronavirus pandemic in 2020, the Wisconsin Elections Commission voted to skip sending assistants into nursing homes to help residents cast their ballots in person, sending mail-in ballots instead. The Racine County sheriff, a Trump supporter, later recommended felony criminal charges of election fraud and official misconduct over the decision. Three prosecutors declined to pursue.


In Florida, a new Office of Election Crimes and Security will have a $2.5 million budget and a staff of 25 who report directly to Republican Gov. Ron DeSantis. In Georgia, state lawmakers have empowered the Georgia Bureau of Investigations to look for election crimes and voter fraud.


Alaska, Arizona, Arkansas and Tennessee, among others, are also considering measures that would give state and local officials more authority to launch criminal investigations of elections crimes. David Becker, executive director of the nonpartisan Center for Election Innovation & Research, said that the laws could have a "chilling effect" on the field.


"Elections officials could find themselves subject to criminal prosecution because someone went to the bathroom and left a drop box unattended," he said. "Who's going to want to do those jobs?" 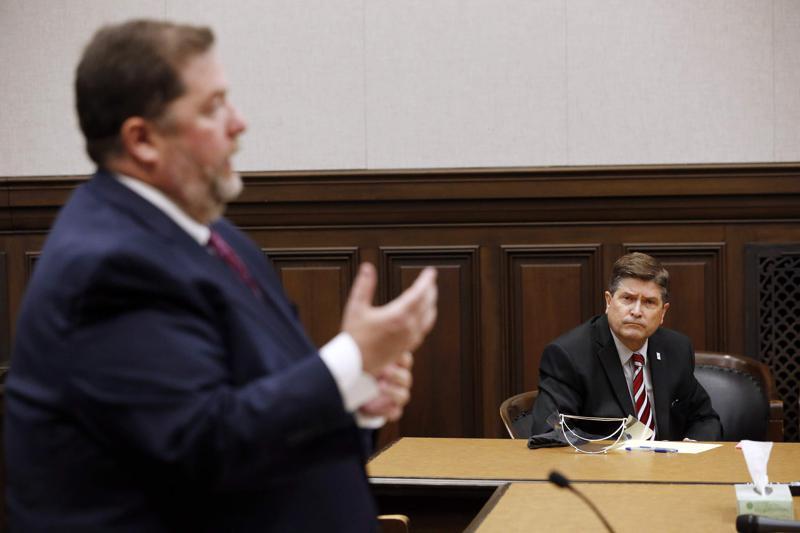 Under a spate of laws proposed or passed in at least 10 states including Iowa, elections administrators could see criminal charges and penalties that levy thousands of dollars in fines or even prison time for technical infractions of election statutes.

23 so far said:
Holding people accountable. Hell of a concept.
Click to expand...

It it obvious (to me at least) that the Iowa Legislature and other legislatures that have passed similar rules on election officials, want local officials to error on the side of caution and not use the “power of their office” to encourage voter participation. They want local officials to view the election rules as “black and white” with zero discretion. This is an impossible task unless you are willing to deny citizens their right to vote. My question then is what is the purpose of local election officials? Whom do you trust?
You must log in or register to reply here.

What if there was an election without any candidates?

In a county election determined by 7 votes, 42 mail-in ballots were rejected that would've counted under Iowa's prior election laws

The Atlantic: How Six States Could Overturn the 2024 Election