Hundreds of recent Iowa voters’ registrations have been challenged in at least two of Iowa’s most populated counties this week, numbers that local elections officials said are extraordinarily higher than usual.


Iowans are able by state law to challenge voter registration information, if they believe the information is incorrect or fraudulent.


Joel Miller said in his 15-plus years as Linn County Auditor, the office has received a total of three voter registration challenges prior to the 119 that were filed this week.


Black Hawk County Auditor Grant Veeder said the office has “infrequently” received voter registration challenges in the past, but “probably never more than 10 at a time.”


Veeder and Miller said the challenged registrations mostly belong to recent Iowa voters whose status has been moved to inactive, meaning they likely did not vote in the 2020 election.


In Black Hawk County, all but two of the 570 challenged registrations were to voters whose status was inactive, officials there said.


Miller said it appears that a majority of the registrations that have been challenged belong to voters who have moved out of state.


Elections officials in Polk and Woodbury counties did not respond to requests for information Thursday. Scott County Auditor Kerri Tompkins said her office has not received any voter registration challenges.


The liberal political news site Iowa Starting Line recently reported on Dr. Douglas Frank’s remarks on July 27 in Independence, Iowa, to a group called Iowa Canvassing, which on its website bills itself as a “grassroots group of volunteers keeping Iowa voter rolls clean for fair and trusted elections.”


The Gazette reached out to Iowa Canvassing, and will update this story if the group responds.


Frank, a former math teacher from Ohio who travels the country speaking to groups, in his remarks to Iowa Canvassing made the widely disproved accusation that there has been “massive election fraud.” He blamed a conspiracy theory involving Jewish billionaire philanthropist George Soros, Hillary Clinton and Facebook founder Mark Zuckerberg, according to Iowa Starting Line.


Dozens of court challenges and dozens of state elections officials have investigated and found no measurable voter fraud in the 2020 presidential election. Former President Donald Trump continues to make claims to the contrary, without evidence.


State law requires the opportunity for a 10-minute hearing for any Iowa voter whose registration has been challenged. Miller and Veeder both said because it appears most of the challengers are to inactive voters — including many who appear to have left the state — they do not expect many hearings to take place. Both said they are planning for a limited number of hearings, and will adjust their schedules if needed.


The voter registration challenges create an extra duty for local elections officials just as they are preparing for the Nov. 8 elections, Miller and Veeder said.


“Receiving this volume of challenges is not something we would prefer to address when we are getting very busy with an upcoming general election, especially when all of the voters involved have already been given inactive status, and many of them will have their voter registration canceled after the Nov. 8 election,” Veeder wrote in an email to The Gazette.


A spokesman for Iowa Secretary of State Paul Pate, the state’s top elections official, acknowledged the unusually high voter registration challenges and expressed faith in county auditors to conduct the challenges as prescribed by state law.


“We trust that county auditors, in consultation with their county attorneys, will work to thoroughly review each challenge and make a determination of the challenged voters’ qualifications in accordance with Iowa law,” Iowa Secretary of State spokesman Kevin Hall said in an email to The Gazette.


Hall also pointed Iowa voters to sections on the Iowa Secretary of State website that address “myths and misinformation” about elections.


Any eligible Iowa voter, regardless of their registration status, can register to vote at any time, including on Election Day at the polls. 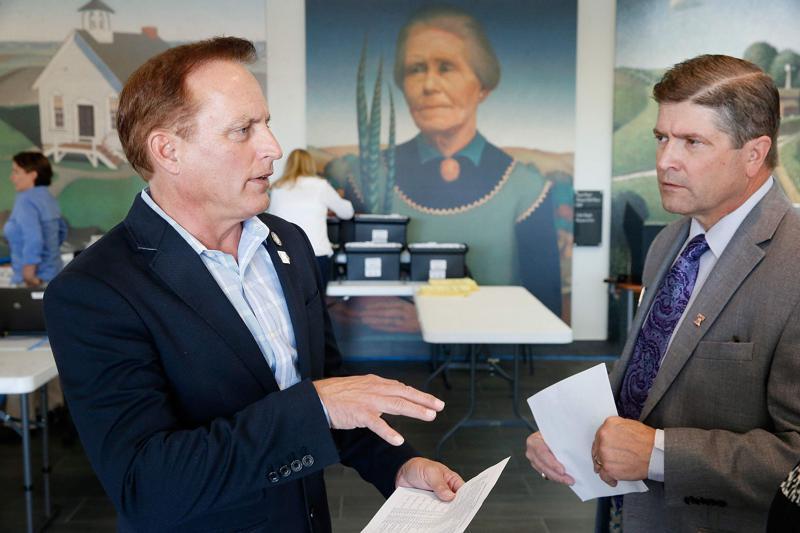 Man arrested by DeSantis’s election police has his case dismissed