Even after 20 years, a mailbox bomb explosion that propelled Doris Zimmerman across a Jones County highway, leaving her with severe hand injuries, bruises and hearing loss, is something she could never forget.


“I was going to go to the Martelle elevator that day and went out to put a letter or card in the box. … That was the wrong thing to do,” Zimmerman, now 81, recalled this month from her home on Linn-Jones Road in rural Anamosa. “It exploded and (the force) blew me across the highway. I was kind of stunned. It smashed my hands a little bit and hit my legs — they were bruised.”


Zimmerman was one of three Iowans injured May 3, 2002, by one of 18 homemade pipe bombs that Lucas “Luke” John Helder, then 21, a Wisconsin college student, constructed and concealed in mailboxes in Iowa, Illinois, Nebraska, Colorado and Texas.

Helder, who later was diagnosed with schizophrenia and committed to federal mental hospital, made national headlines after the FBI issued an all-points bulletin and he was captured following a high-speed chase near Reno, Nev.


On May, 7, 2002, he told authorities after his arrest that he was trying to make a “smiley face” pattern on the map with where he placed the bombs. The first 16 planted in Iowa, Illinois and Nebraska were arranged in circles to show the eyes. Two found in Colorado and Texas started the smile, according to news reports.

The five bombs in Iowa were at Zimmerman’s home in Anamosa, and also Tipton, Dubuque, Farley and Eldridge. Only two other bombs exploded in Iowa — one in Tipton that injured Delores Werling, then 70, and in Dubuque that injured Ken Dolphin, then 22, a rural postal carrier.


Only six — in Iowa and Illinois — of the 18 bombs exploded and some of them included anti-government notes, according to news reports. Helder also had six additional pipe bombs in the trunk of his father’s Honda Accord when he was arrested.


Doris’ husband, Richard, who was sitting nearby his wife in the living room during the recent interview, said he was down the road working in one of their farm fields when he heard the blast and saw smoke. He then saw his wife driving the truck to him. After seeing her, he jumped in and rushed her to a Cedar Rapids hospital.


“A friend in Viola, about 2 miles away, heard the explosion,” Richard said. “It blew the mailbox about 135 feet across the field there.”

Doris downplayed her injuries during the interview, but Richard said her hands were seriously mangled and required surgeries to reconstruct some fingers. It left some of her fingers disfigured but she also has arthritis in her hands, which contributed to the damage. Doris was in the hospital about a week and had several surgeries on her hands, he said.


When they got to the hospital, the staff was concerned there might also have been white powder in the mail — at about the same time, people were receiving anthrax hoaxes -- so they hosed her off “from top to bottom,” she said.


“You don’t think about something like that happening,” Doris said. “He (Helder) must have come in the middle of night. We didn’t hear anything and didn’t have a dog back then. Richard usually took out the mail but I’m glad it was me instead because it was field time (for him).”


The explosion also caused Doris hearing loss for days and the shrapnel injured her legs. She still has a hard or rough area on her thigh — mainly calcium build up — that was hit by a 6-inch piece of pipe of the bomb.


Her wedding ring setting and band also were damaged in the explosion, and she lost her clothes and “favorite” jacket,“ which was taken for evidence to Washington, D.C.


Overall, Doris considers herself lucky. Instead of standing in front of the mailbox that day, she was in a hurry and reached around from the side, which prevented more serious injuries.


After Helder’s arrest, FBI agents came to the Zimmermans and told them about Helder’s “smiley face” plan, Richard said. They brought a police dog and combed through the yard looking for evidence. The 6-inch pipe and a trigger mechanism were found in the ditch area, he said.


“They blocked off the road for days,” Doris said.


Helder was first indicted May 7, 2002, in U.S. District Court for the Northern District of Iowa on two charges of using an explosive to damage personal property that resulted in injury to a person and possession of a pipe bomb. He pleaded not guilty and his lawyer, Jane Kelly, now U.S. 8th Circuit Court of Appeals judge, filed his notice of intent to claim insanity at trial.


Helder was charged in the other states, but those charges were dismissed because Iowa filed first and had the most evidence and strongest case, retired Assistant U.S. Attorney Richard Murphy said. 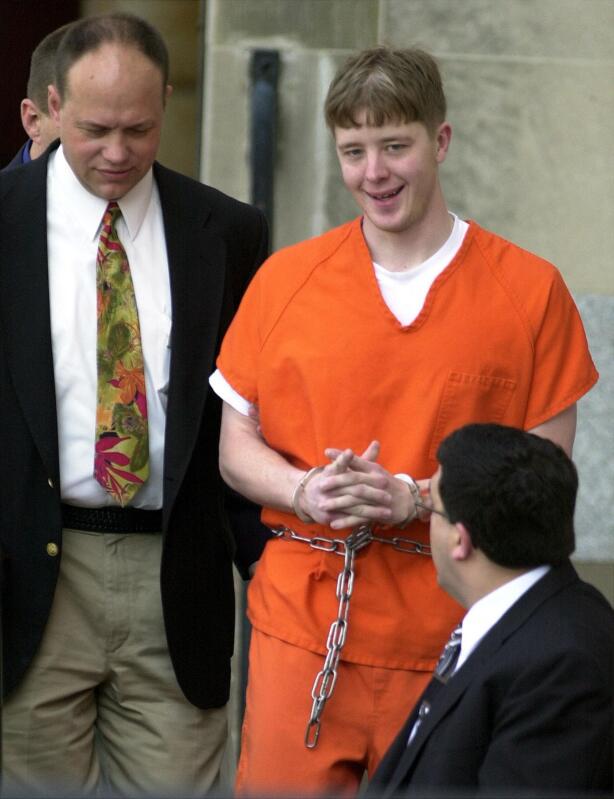 A Jones County woman propelled across a highway from a mailbox pipe bomb recalls the trauma 20 years later. Luke Helder, a Wisconsin college student charged with planting the bombs in five states in 2002, remains incompetent to stand trial and committed to a federal mental facility.

“We had more bombs (that exploded) than the others where people were injured and this district put in the effort upfront,” noted Murphy, who remained on the case until his retirement last year.


Helder was found incompetent to stand trial and U.S. District Judge Mark Bennett committed him in 2004 to the Federal Medical Center in Rochester, Minn., for hospitalization and treatment.


Psychiatric experts agreed that Helder, who was born in St. Paul and grew up with adopted parents, Cameron and Pamela Helder, in Pine Island, Minn., suffered from a psychotic disorder and posed a danger if released, according to court documents.


Helder was an above-average student and active in extracurricular sports, according to testimony during a 2004 hearing in Minnesota. He attended Rochester Community and Technical College and after graduation transferred to the University of Wisconsin-Stout, where he completed five semesters.


He set out on the five-state trip to place the mailbox bombs after being prompted by what Helder thought was a message from then-President George W. Bush, according to court documents.


During one of the hearings, Andrew Simcox, chief of psychology at the Rochester hospital, said Helder displayed various symptoms of schizophrenia — delusions, hallucinations, disorganized speech and behavior, breaks in logic and inappropriate affect.


Helder’s delusional beliefs are a central part of his mental illness, Simcox testified. He believed in the “ascension” of earth in 2011 — that Christ would return and earth would become heaven. He also believed in the “hundredth monkey syndrome” — that there will be a “common consciousness among people and a critical mass gaining a common awareness.”


Helder thought his actions were critical to create this awareness and promote the “ascension,” Simcox said at the hearing. Helder also believed he was capable of leaving his body and traveling through higher dimensions. He didn’t believe in death but said people are released to a higher dimension like “ghosts,” Simcox added.


In regards to violence, Simcox noted the bombs cause significant injuries and could have caused death, which Helder is aware of but didn’t appreciate because he didn’t believe in death.


In regards to substance abuse, Helder had a severe marijuana addiction and if released would start using it again, Simcox said.


Simcox concluded that Helder was suffering from a mental disease or defect and if released would create a substantial risk. He believed the federal hospital was the best place to hold Helder and provide treatment, medications and access to family visits.


Helder remained incompetent and institutionalized, according to regular status conferences by the court. But in 2007, an Iowa federal grand jury indicted Helder on a superseding indictment for additional counts, which included the bomb planted in the Zimmerans’ mailbox, which wasn’t included in the first indictment.


Helder was indicted on four counts of using explosives to damage three properties — mailboxes — and injuring two residents and one postal carrier; four counts of using and carrying and possessing a firearm (pipe bomb); and one count of possessing and one count of transporting one or more firearms — pipe bombs- not registered with the National Firearms Registration and Transfer Record.


Murphy said penalties for the charges vary from five to 40 years, seven to 40 years and 30 or 40 years to life. Some of the charges must run consecutively to each other, so Helder, if still convicted, faces about 120 years — or up to life in prison.


Doris Zimmerman said she wasn’t upset that Helder hadn’t gone to trial because she understands he has mental health issues.


Her husband said they got updates from authorities every once in awhile but those stopped and they lost track of the case.


Murphy said over the years, Helder’s parents, Cameron and Pamela Helder, wanted the court to release their son from the Rochester facility so they could move him to a state hospital. But he will remain in the federal facility as long as he poses a danger to others.


If Helder is ever found competent, he will stand trial in Iowa.

Wow, I forgot all about that. Wild stuff.
Reactions: win4jj and cigaretteman

“In regards to substance abuse, Helder had a severe marijuana addiction and if released would start using it again, Simcox said.”

The list of victims includes a family member. It was a very scary deal, but one that could have been worse.

Why do terrorists pick on ordinary people?
Reactions: cigaretteman
You must log in or register to reply here.

In unpublished memoir, Emmett Till’s accuser calls herself ‘a victim’

Off Topic Monday at 9:12 AM
Joes Place