The scar runs across his chest like a pale horizon.

Behind the scar, Randy McIntyre’s new lungs draw breath that the ones he was born with could not sustain.

On May 5, a stranger’s bequest spared Randy’s life. The man from Andalusia, Ill., near the Quad Cities became the first in Iowa to receive a double lung transplant after COVID-19 destroyed his respiratory function.

He wants very much to one day know the name of his donor. But that will have to wait.

For now, the 59-year-old is adjusting to his new life — his early retirement, daily injections and pills, restrictions on what he can do and readjusting to life at home after five months in a hospital bed.

A month in Rock Island​


On Jan. 6, Randy tested positive for the coronavirus.

A week later, he went to UnityPoint in Rock Island, where he got a chest X-ray, a breathing treatment and some oxygen. He was well enough to go home.

But his condition worsened over the next week, and he was admitted on Jan. 20. His wife, Sue, had the virus, too, but her symptoms were mild.

“At Rock Island, they went as far as they could for me,” Randy said. “I stayed off the ventilator here and in Iowa City, but I was requiring massive amounts of oxygen.

“My team knew how bad my lungs were, and I think they were waiting on me, because I was in such denial.”

But there was no denying Randy’s lungs were in big trouble. There was no chance they would recover.

The monthslong process of preparing for a transplant — and praying for a donor — began in earnest.

As he waited, he did so with COVID-related limits on visits from his family. Sue could come for a couple of hours a day at first, though the window for visits grew a bit as the weeks went by.

Together, the McIntyres have five adult children and 15 grandchildren. The kids took turns visiting, and the “incredible” nursing staff filled the gaps with their care and support.

“The kids made a poster with pictures of all the grandkids,” Randy said. “That’s what really keeps you going, seeing something like that.”


It still chokes him up, talking about the day a nurse came into his room at the University of Iowa Hospitals and Clinics and went straight to the computer, rather than her usual spot at his bedside.

“She just started typing, and I thought that was a little odd, because she’d usually chat for a minute,” Randy said. “Without looking up, she said, ‘They found your lungs.’

Organ transplants are both meticulously orchestrated and difficult to predict. All donors are different, and the harvesting process is delicate and subject to change, depending on the circumstances.

The patient has to be ready, too. In Randy’s case, a stent was required for a relatively minor arterial blockage, and his body mass index had to be where the doctors wanted it.

It appeared things were ready to go.

“We got the call on a Sunday morning at 6:30 that he was ready to go into surgery, and we hit the road and got to Iowa City by 8,” Sue said. “Then we were told he wasn’t ready, then he was. This went on for two full days.

At 8 p.m. the next Tuesday, May 4, Randy finally was taken into surgery. Sue got a call in the waiting room at 11 p.m., saying the transplant had begun.

After about four months in the hospital, everyone was ready to see Randy get better.

“As they took me out of my room for the transplant, the nurses all lined up in the hall, and they played the theme song from ‘Rocky,’” he said.

While the University of Iowa Organ Transplant Center had performed 215 double-lung transplants before him, his was the first that resulted from the ravages of the coronavirus.

“I survived COVID, but my lungs had just deteriorated so badly. I couldn’t breathe without oxygen, lots of oxygen,” he said. “I couldn’t leave the hospital.

“It was get a transplant or die.”

Now about four months into the critical first year after transplant, Randy and Sue are adjusting to a new way of life. Even getting used to being home together again is an adjustment.

They enjoy camping in their RV, but Randy is limited in how far he can travel — just in case he would have a problem.

Some restrictions are letting up, such as how much weight he can lift, but he still goes to physical therapy twice a week and must exercise every day so his new lungs get used to being in their new body.

He must wear hats and long sleeves because he is at high risk of getting skin cancer from the medications he will be taking for life.

The couple goes to Iowa City every week for checkups and follow-up care. While he was a patient, Randy learned that his brother and a nephew died suddenly, so the vast campus is — as it is for thousands of others — a place of life and of death for Randy.

“They don’t just treat you physically,” Sue said. “They helped him through his grief, too. There were some very hard days, but the people in Iowa City are remarkable.”


When Randy finally got back home to Andalusia on June 18, he got to see his “other family.”

Before COVID, he’d been a volunteer with the Andalusia Fire Protection District for about eight years. When he got out of the hospital, a parade of fire trucks and other vehicles showed up, sirens wailing, outside his home.

“That was my other family,” he said. “That was a very emotional day for all of us.”

While Randy is infinitely aware of the debates surrounding COVID-19 vaccines, he said he knows better than to try to convince anyone to change their mind. He will get a vaccine as soon as he is medically able, and Sue is looking forward to a booster for her vaccines, but they don’t wish to evangelize.

“It won’t do any good,” he said. “There’s too much bad information out there. If you really want to know what’s going on, talk to your family doctor.”

Randy did have a word of warning, though: “It’s real. Take a good look at your family. I laid in a hospital bed for five months. None of this is fun.

“Think about your family.” 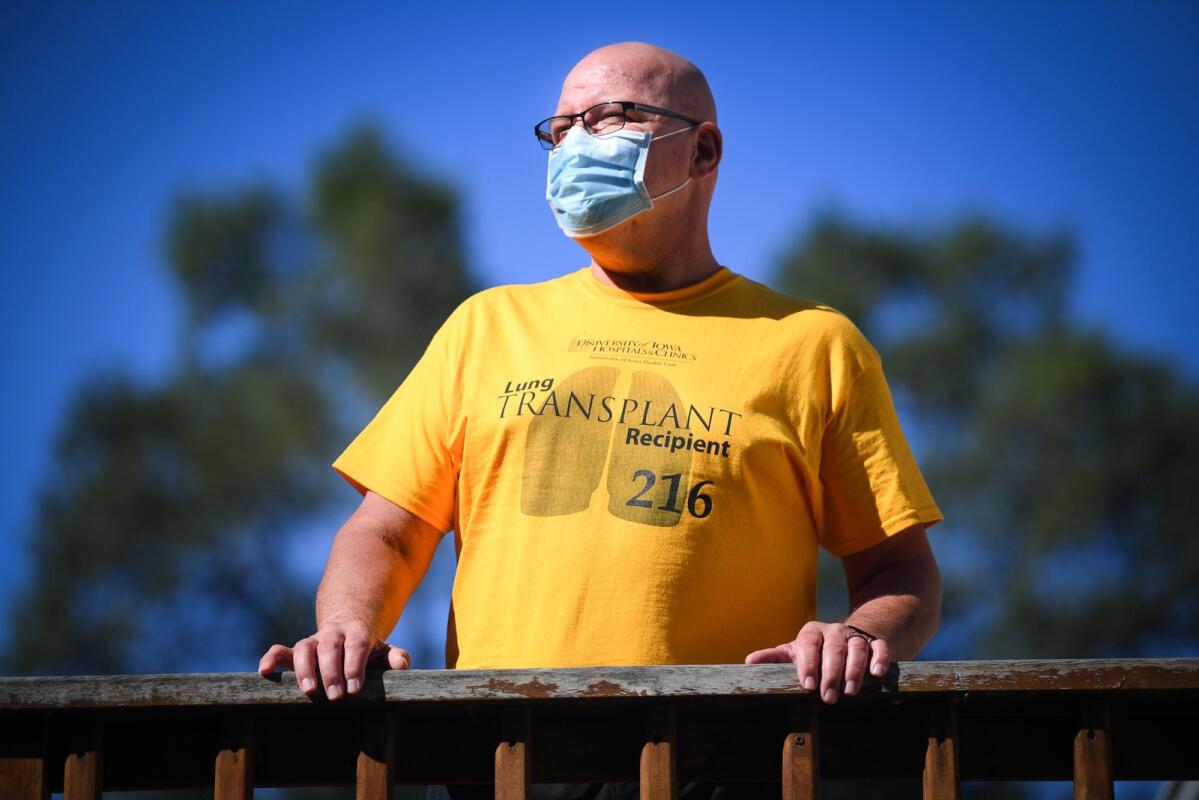 A 59-year-old man from Andalusia, Ill., near the Quad Cities became the first in Iowa to receive a double lung transplant after COVID-19 destroyed his respiratory function.

Randy will be on immunosuppressants to prevent rejection of his new lungs, and be susceptible to Covid Delta infection in the meantime....

#GettingInfectedBeforeVaccinesWereAvailableSucks
Reactions: cigaretteman
You must log in or register to reply here.

Man tests positive for COVID-19, monkeypox and HIV all at once...

Geez, who gets sued over this?