Here is a picture of her committing the crime: 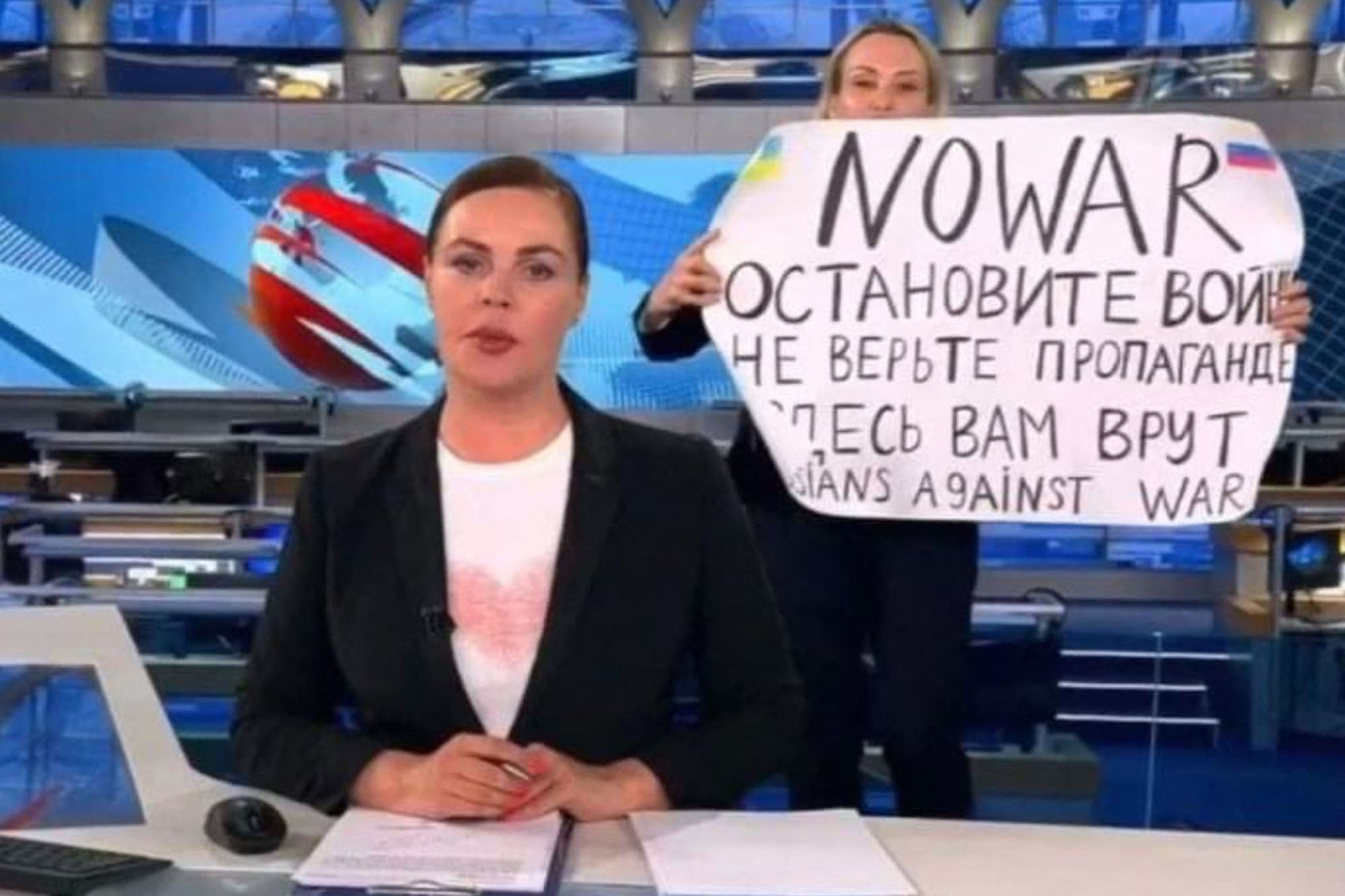 The sign she is holding reads: “Stop the war. Don’t believe propaganda. They’re lying to you,”

In keeping with the spirit of HROT, here is a picture that more clearly displays her Russian/Ukranian good looks: 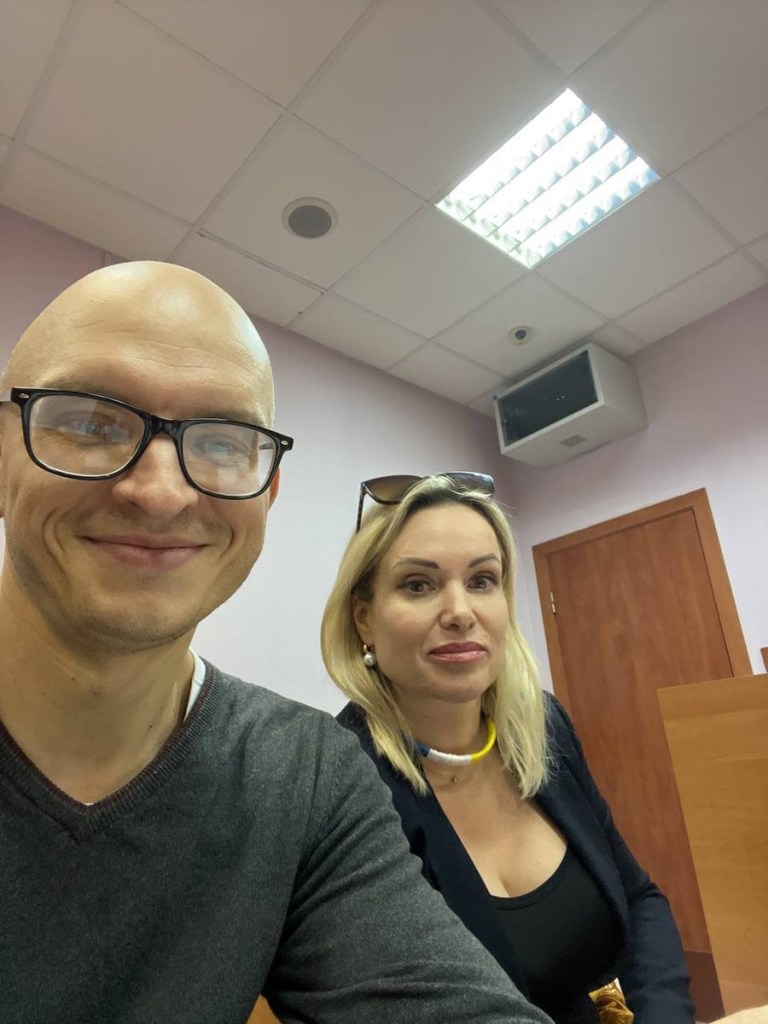 ... and here is the story from the New York Post:

The brave Russian journalist who stormed her TV network’s studio to speak out against the invasion of Ukraine was found guilty Tuesday of flouting laws against protesting in the country.

Marina Ovsyannikova was fined 30,000 rubles after being detained Monday over the fearless stunt, Russian newspaper Novaya Gazeta reported. Her lawyer posted a photo to Twitter Tuesday showing Ovsyannikova appearing in court. The producer was fined for “[organizing] an uncoordinated public event,” the newspaper reported.

During the live broadcast Monday, Ovsyannikova burst into the frame while Channel One anchor Ekaterina Andreeva read the news — holding a sign that read “Stop the war. Don’t believe propaganda. They’re lying to you,” in a mix of English and Russian. She chanted, “Stop the war! No to war!” as Andreeva tried to get through her segment before producers switched to a video clip.

Before her on-air protest, Ovsyannikova recorded a video in which she said she was “deeply ashamed” to have been a part of “Kremlin propaganda,” the Russian OVD-Info human rights group said. She called on Russians to protest the war, saying, “Only we have the power to stop all this craziness,” OVD-Info said. Ovsyannikova also said in the video: “What is happening in Ukraine is a crime and Russia is the aggressor. Responsibility for that aggression lies on the conscience of only one person. That person is Vladimir Putin.”

“My father is Ukrainian, my mother is Russian, and they were never enemies,” she added. “The necklace around my neck is a symbol that Russia must immediately stop this brother-killing war and our brother peoples can yet reconcile.” Her necklace included sections in blue, white, yellow and red — the combined colors of the national flags of Russia and Ukraine.

Ukraine President Volodymyr Zelensky acknowledged Ovsyannikova’s act during his nightly address. “I am grateful to those Russians who do not stop trying to convey the truth. To those who fight disinformation and tell the truth, real facts to their friends and loved ones,” he said, according to the news outlet. “And personally, to the woman who entered the studio of Channel One with a poster against the war,” Zelensky added.

Under a law passed by Russia’s parliament this month, journalists who categorize the invasion of Ukraine as a “war” or report on Kremlin military setbacks and civilian deaths would face three years in prison.
The punishment could rise to 15 years behind bars for cases that lead to “severe consequences,” Russian officials said.

Criminal charges have “not yet” been filed against Ovsyannikova, according to Novaya Gazeta.
N

It is actually closer to $256 and a few pennies ... as of the conversion rate a few days back.

However, that is just the fine. According to the article, she can now be criminally charged and could face jail time.

They seem to put the fine before the actual trial.

It’ll be interesting to see if they’re willing to turn her into a martyr and give her credibility.

Anyone with a brain can figure out you don’t imprison someone for lying about a war that’s going well.
Reactions: Titus Andronicus

I'd pay her fine. 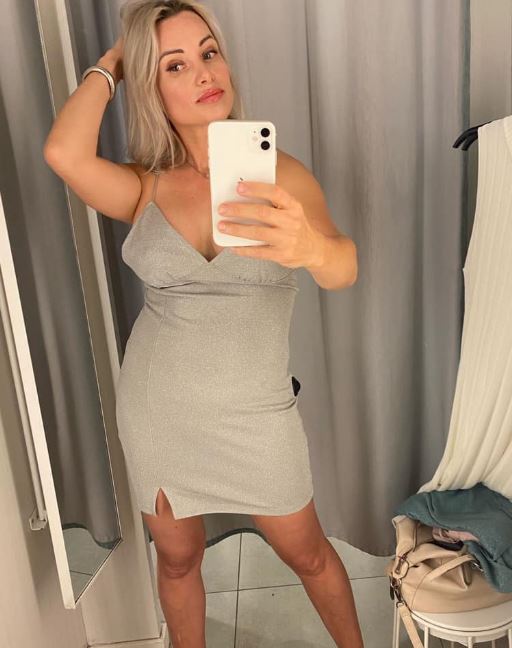 Reactions: NDallasRuss
You must log in or register to reply here.

Surrender to a Drone? Ukraine Is Urging Russian Soldiers to Do Just That.