But proving the “drunken monkey” hypothesis has been an exhausting—and messy—endeavor.​ 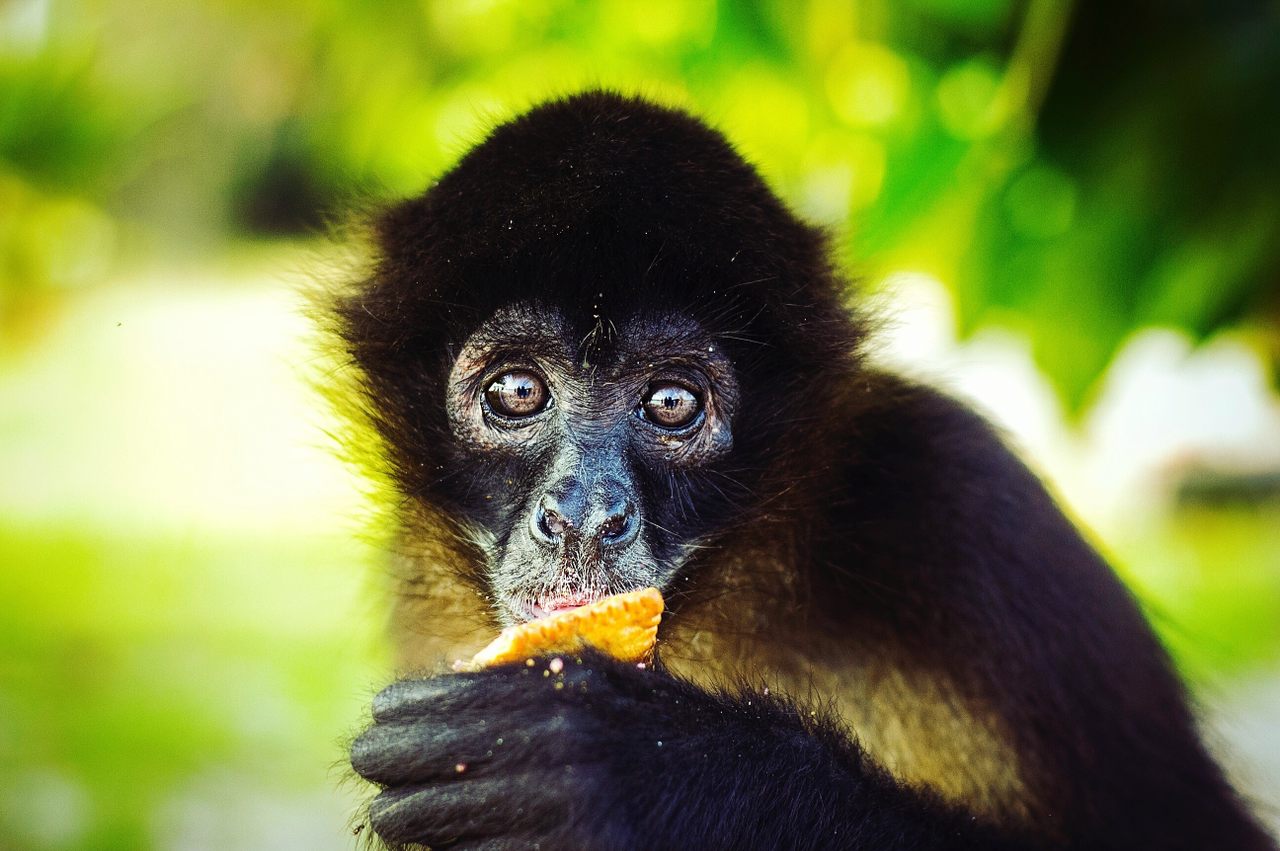 A new study finds that black-handed spider monkeys like their fruits, well, boozy. JOSE RUMBO/EYEEM/GETTY IMAGES
In This Story

IN 1990, BIOLOGIST ROBERT DUDLEY was enjoying a beer on a wide veranda overlooking a dense rainforest canopy. It had been a long, hot day on Barro Colorado Island, a six-square-mile landmass in the Panama Canal that’s become one of the world’s most researched rainforests thanks to the Smithsonian Tropical Research Institute there. Dudley was there to study insects, but that afternoon he was thinking about monkeys. As he sipped his beer and looked out at the spider monkeys plucking the ripe fruits of a hog plum tree (think delicious little mangoes), he began to wonder if they too might be drawn to alcohol. He could smell the sickly sweet scent of the fermented fruits from the veranda, and it seemed the monkeys could too.

In 2015, Dudley turned this “drunken monkey” theory into a book, The Drunken Monkey: Why We Drink and Abuse Alcohol, which hypothesizes that humans’ proclivity towards alcohol first arose from our monkey ancestors smelling their way to ripe, nutritious, alcohol-laden fruits. Dudley pulled together related research and case studies in his book, but now, seven years later, a new study conducted on Barro Colorado is the first to directly analyze and subsequently support Dudley’s theory.

To track the alcohol consumption of black-handed spider monkeys, Christina Campbell of California State University, Northridge, the lead author of the new study, and graduate student Victoria Weaver spent 12-hour days following the monkeys through the rainforest. Waking up before dawn, they’d hike into the forest to find the monkeys before they woke up and started moving through the 100-foot-tall canopy. As Campbell and Weaver followed, they’d collect the fruits the monkeys would discard. (Monkeys usually only take one bite of a fruit before throwing the rest to the forest floor.)

It’s challenging and physically demanding work, says Campbell, who spent two weeks trailing the animals before Weaver took over the majority of the fieldwork. “The monkeys tend to go across the tops of the trees and so they’re doing fine, but you’re having to go up and down hills to catch up with them. And they move fast.” Oftentimes, Campbell and Weaver couldn’t even see the monkeys they were following. “You’re just kind of following movement in the trees more than knowing that you’re actually following a particular monkey and you kind of hope like hell that when they stop to feed again, you’re still with them.”

Testing conducted on the monkeys’ discarded fruits, which all came from hog plum trees, showed that on average each piece of fruit had an ethanol content somewhere in the range of one to two percent. This finding supports the core tenant of Dudley’s hypothesis—“that there is alcohol in fruits that primates are eating,” as he puts it.

Campbell and Weaver also managed to collect urine samples from the monkeys. Before going out for the day, Weaver would clasp a large plastic funnel that drained into a small test tube to her pack with a carabiner. When she’d notice a monkey peeing, she’d race over with the funnel and try to collect a sample. As it turns out getting peed on by primates is a bit of an occupational hazard for primatologists, jokes Campbell. “You might be watching one particular monkey and not realize that there’s another one directly above you and so we would fairly regularly get pooped on and peed on.” 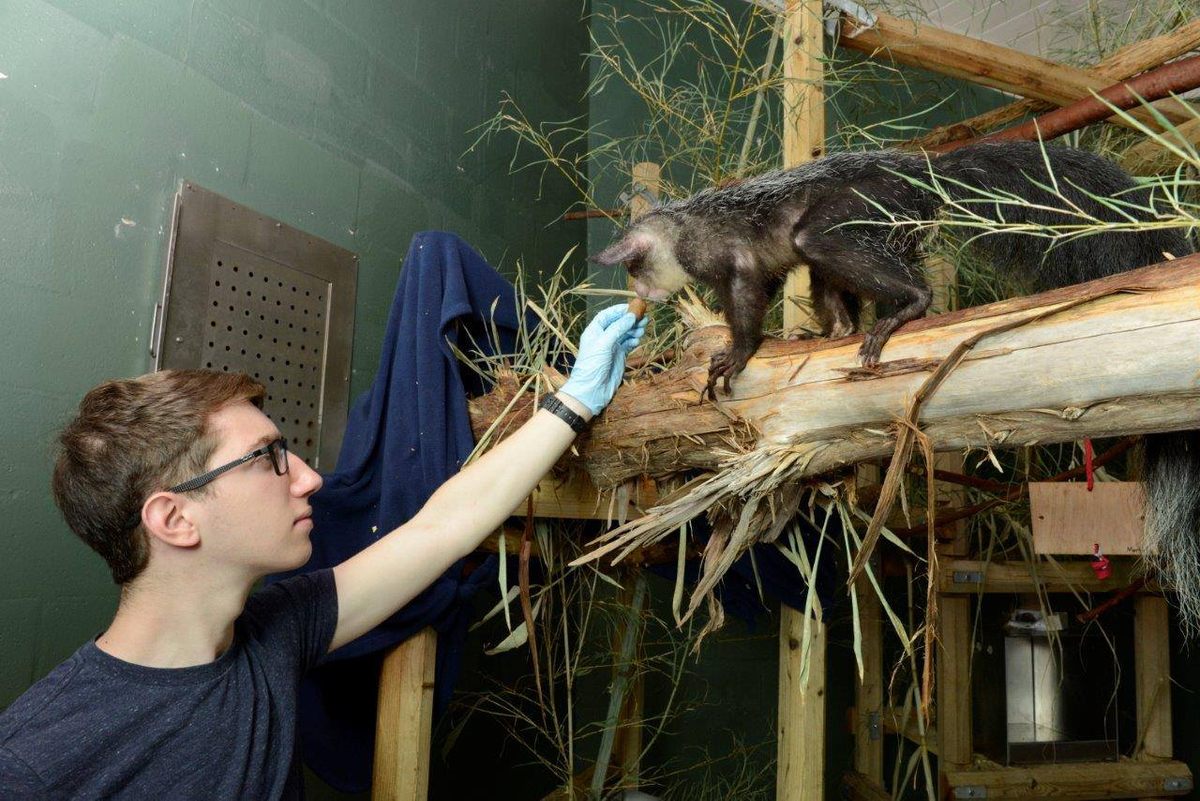 Dartmouth primatologist Nathaniel Dominy, who worked with Dudley on another study that demonstrated captive lemurs’ inclination towards alcohol, sees the importance of this new study, particularly when it comes to the urine samples Campbell and Weaver collected. “I think they did a smart thing by capturing the urine because you could imagine a cranky critic saying, ‘Well, okay, you’ve verified that there’s alcohol in the fruits, but how do you actually know that the animals are metabolizing it?’ Well, they were able to verify that with the urine. So I think that was a really nice, crucial step,” says Dominy. Ethanol is far more calorie-rich and energy-rich than non-fermented sugars, and the urine samples showed that the monkeys’ digestive systems are taking advantage of that and are breaking down the ethanol.

But there’s a lot more research that needs to be conducted to prove Dudley’s drunken monkey hypothesis. This study is just “part one of about ten different parts I would like to systematically demonstrate,” says Dudley. “I want to know, well, how much are they consuming? What’s their blood alcohol level? What are their genes? What are the enzymes doing when they metabolize alcohol?”

Despite the theory’s name, Dudley doesn’t actually believe that monkeys are getting drunk. There’s not enough alcohol in the fruits they consume to impair motor or cognitive abilities, explains Dudley. That said, Campbell has seen a few monkeys start to get a little woozy towards the end of the growing season when the last remaining fruits are at their most fermented. She remembers, “they were all wobbly up in the trees and we had one fall out of the tree. They were sleeping a lot. But, yeah, the idea of the hypothesis is that it’s not about that. That might happen, you know, very rarely, but what we’re looking at and the study showed and what we were trying to show is the very prevalent consumption of these low levels [of alcohol].” 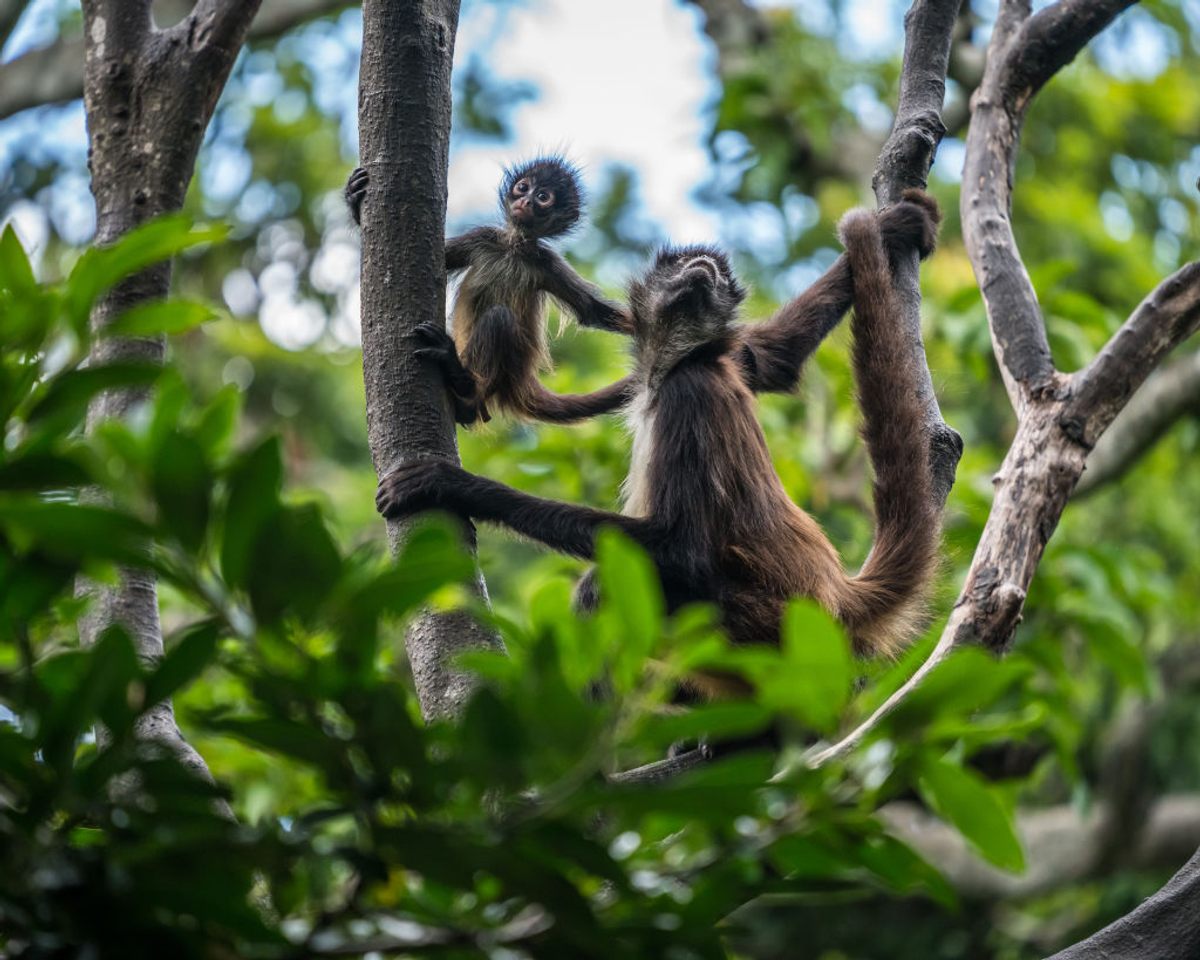 
Another part of Dudley’s drunk monkey hypothesis is that, in moderation, alcohol consumption can actually be beneficial for humans and monkeys alike. Ethanol-rich fruits might kill off harmful bacteria making the fruits safer to eat. They might also stimulate hunger, an important advantage when there’s such fierce competition for food. Low-level alcohol consumption has also been linked to a reduced risk of cardiovascular disease in modern humans. This may be connected to a phenomenon known as hormesis. “It’s the idea that if you’re constantly exposing your immune system to a little bit of toxin, then it has regular practice dealing with it and you are healthier overall,” explains Dominy.

The potential health benefits of alcohol are part of a “hotly debated literature,” says Dudley, but so far this and other work on the drunken monkey hypothesis has begun to explain humans’ proclivity towards alcohol. Dominy believes Dudley’s work “helps to kind of destigmatize the consumption of alcohol and makes it a more natural phenomenon.”

Before beginning his work around the drunken monkey hypothesis, Dudley drank alcohol very rarely. “But now I just think about chimps in the rainforest and spider monkeys. They’re probably getting the equivalent of 10 or 12 grams of ethanol a day, which is, ballpark, one standard drink, you know, a glass of wine. And this goes back historically across human cultures: a little alcohol is a good medicine,” says Dudley. Today, Dudley drinks a little more than he has in the past, concluding that it’s “best to drink with friends over a meal,” much like the spider monkeys of Barro Colorado Island do.
Reactions: Moral and Tenacious E

I thought this story was going to be about HROT. I guess it still kinda is.
Reactions: Moral, Tenacious E and torbee

Bonerfarts said:
I thought this story was going to be about HROT. I guess it still kinda is.
Click to expand...

“You might be watching one particular monkey and not realize that there’s another one directly above you and so we would fairly regularly get pooped on and peed on.”
Reactions: The Tradition, Moral and Tenacious E
M

Too bad Mickey has to drink alone now.

I'll drink to that.

At least now I know who’s buying this stuff. 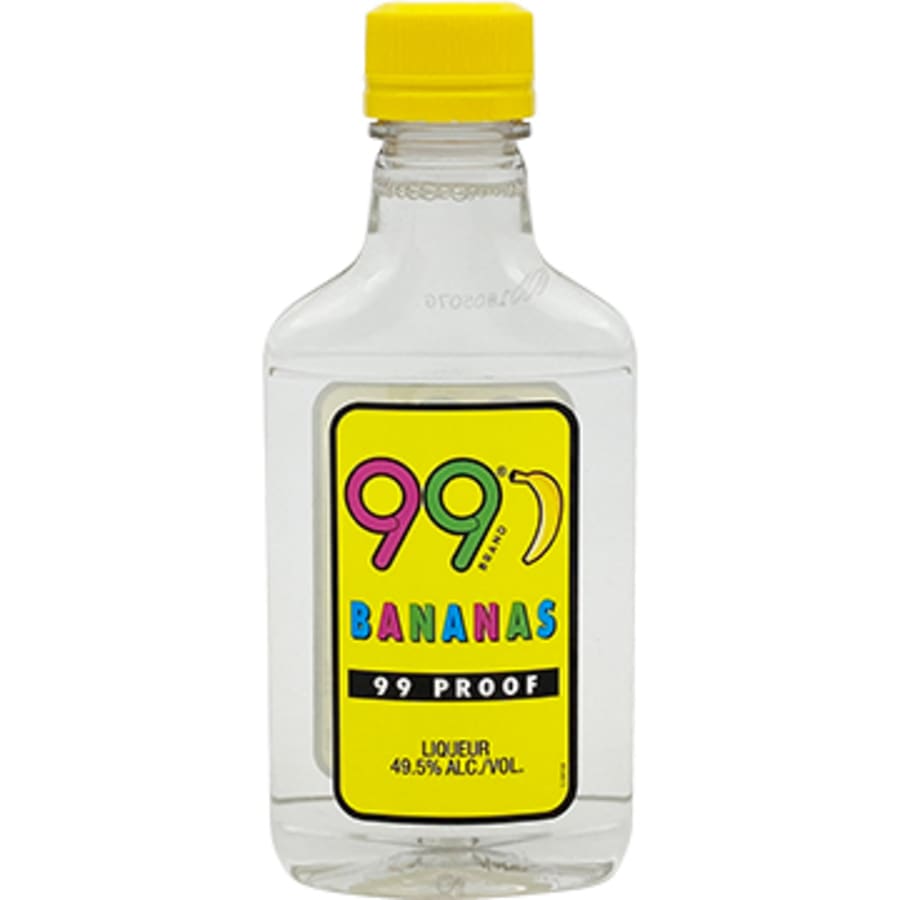 When I was 8 I drank that and smoked some weed with it. It was the first time I ever smoked and drank on the same night.
Reactions: Bonerfarts, ChrisTob13 and mnole03

Moral said:
When I was 8 I drank that and smoked some weed with it. It was the first time I ever smoked and drank on the same night.
Click to expand...

Anyone else throw up a bit in their mouth when they saw this?
Reactions: mnole03

torbee said:
So, how was it?
Click to expand...

It kind of reminds me of hair spray with a hint of banana. 8/10
Reactions: mnole03 and torbee

FWIW - It’s much easier to have secks with OP Mom’s red baboon anus when she has been drinking. 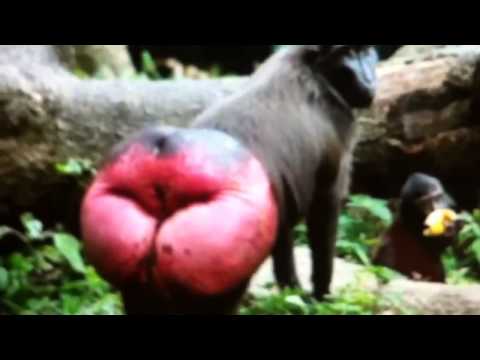 Thread headline is not what the story says.

Good job, Torbs.
You must log in or register to reply here.

The eggheads and the nannies are coming after your alcohol.....

All monkeys accounted for after trailer crash

Men: Beer is Good For You Again