Nearly two-thirds of Americans think the federal government is not doing enough to fight climate change, according to a new poll that shows limited public awareness about a sweeping new law that commits the U.S. to its largest ever investment to combat global warming.

Democrats in Congress approved the Inflation Reduction Act in August, handing President Joe Biden a hard-fought triumph on priorities that his party hopes will bolster prospects for keeping their House and Senate majorities in November’s elections.

Biden and Democratic lawmakers have touted the new law as a milestone achievement leading into the midterm elections, and environmental groups have spent millions to boost the measure in battleground states. Yet the poll by The Associated Press-NORC Center for Public Affairs Research finds that 61% of U.S. adults say they know little to nothing about it.

While the law was widely heralded as the largest investment in climate spending in history, 49% of Americans say it won’t make much of a difference on climate change, 33% say it will help and 14% think it will do more to hurt it.


The measure, which passed without a single Republican vote in either chamber, offers nearly $375 billion in incentives to accelerate expansion of clean energy such as wind and solar power, speeding the transition away from fossil fuels such as oil, coal and natural gas that largely cause climate change.

Combined with spending by states and the private sector, the law could help shrink U.S. carbon emissions by about two-fifths by 2030 and chop emissions from electricity by as much as 80%, advocates say.

Michael Katz, 84, of Temple, New Hampshire, said he thinks Biden has “done an amazing amount of work” as president. “I’m sort of in awe of what he’s done,’’ said Katz, a Democrat and retired photographer. Still, asked his opinion of the Inflation Reduction Act, Katz said, “I’m not acquainted with” it.

After learning about the law’s provisions, Katz said he supports increased spending for wind and solar power, along with incentives to purchase electric vehicles.

Katz said he supports even stronger measures — such as restrictions on rebuilding in coastal areas damaged by Hurricane Ian or other storms — but doubts they will ever be approved.

“People want their dreams to come true: to live near the ocean in a big house,’’ he said.

Leah Stokes, an environmental policy professor at the University of California, Santa Barbara, said she was not surprised the climate law is so little known, despite massive media coverage when it was debated in Congress, approved and signed by Biden.

The law was passed during the summer, when people traditionally pay less attention to news, “and it takes time to explain it,’’ especially since many of the law’s provisions have not yet kicked in, Stokes said.

Biden and congressional Democrats “delivered in a big way on climate,’’ she said, but now must focus on helping the public understand the law and “winning the win.’’

Meredith McGroarty, a waitress from Pontiac, Michigan, said she knew little about the new law but supports increased climate action. “I have children I’m leaving behind to this world,’’ she said.

McGroarty, 40, a Democrat, urged Biden and other leaders to talk more about the climate law’s “effects on normal, everyday people. Let us know what’s going on a little more.’’

Americans are generally more likely to support than oppose many of the government actions on climate change included in the law, the poll shows. That includes incentives for electric vehicles and solar panels, though relatively few say they are inclined to pursue either in the next three years.

Nearly two-thirds of Americans think the federal government is not doing enough to fight climate change, according to a new poll that shows limited public awareness about a sweeping new law that commits the U.S. to its largest ever investment to combat global warming.

Politically this means next to nothing.... 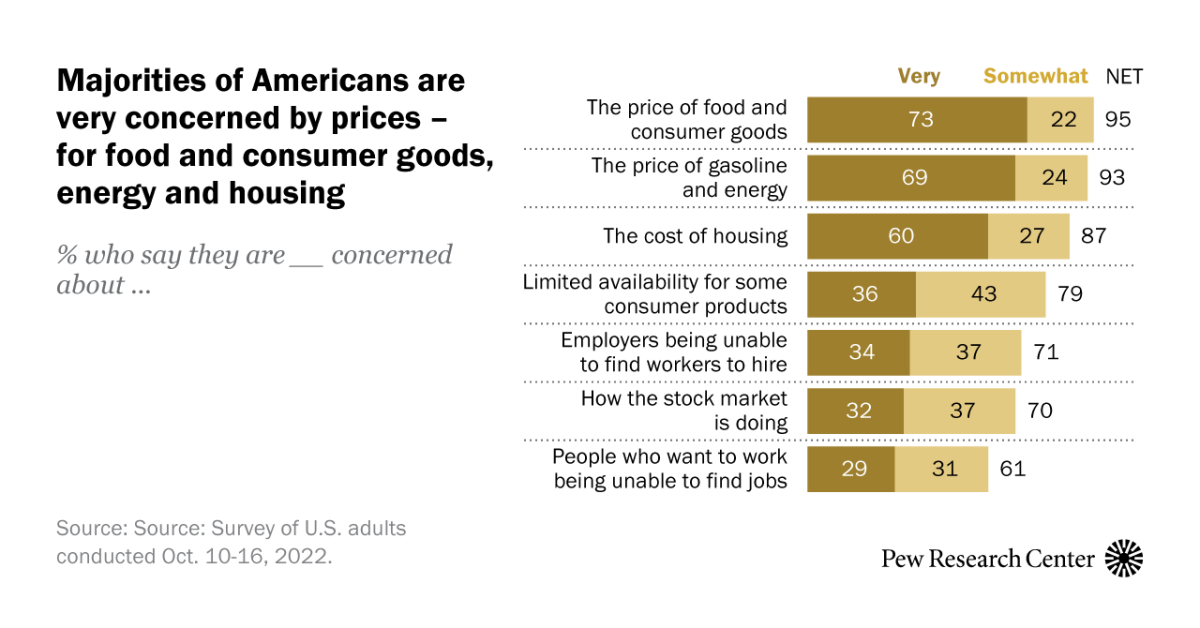 The economy is clearly the top issue for voters; fully 79% say it will be very important to their voting decisions – the highest share among 18 issues included on the survey. The public continues to take a dim view of current economic conditions. Just 17% of U.S. adults say the economy is in...

www.pewresearch.org
You must log in or register to reply here.

U. S. to Pay Millions to Move Tribes Threatened by Climate Change

The Texas Group Waging a National Crusade Against Climate Action