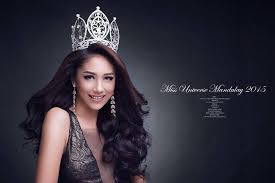 A Myanmar beauty queen who publicly criticized her country’s military junta, and later became stranded at the Bangkok airport, arrived Wednesday in Canada, where she is seeking asylum.
Thaw Nandar Aung, also known as Han Lay, landed in Toronto and said she was going to live on Prince Edward Island, a province off Canada’s Atlantic coast, Reuters reported. It was unclear what her status was, but Han Lay, 23, told Radio Free Asia she was granted permission to stay with the help of Canadian officials and the U.N. refugee agency.


Are you on Telegram? Subscribe to our channel for the latest updates on Russia’s war in Ukraine.

“Everything happened so fast, and I only have a few pieces of clothing,” she told the broadcaster before departing for Canada. But, she said, “I have spoken out for Myanmar wherever I go. Since Canada is a safe place for me, I will have more opportunities to speak out on the issue.”

Han Lay first garnered worldwide attention last year when, at the Miss Grand International beauty pageant in Thailand, she used her time on the stage to speak out against Myanmar’s military rulers.
At the time, the junta, known as the Tatmadaw, had just seized power and anti-military protests were raging. The military and police confronted demonstrators with deadly force. On one particularly bloody day, March 27, security forces killed over 160 protesters.
How Myanmar's military terrorized its people
That same day, Han Lay was on a stage in Bangkok wearing a traditional white gown as one of 20 finalists in the pageant.
“Today in my country, Myanmar, while I am going to be on this stage, there are so many people dying; more than 100 people died today,” she told the audience and cameras, wiping away tears. “I am deeply sorry for all the people who have lost their lives.”


“Every citizen of the world wants the prosperity of their country and the peaceful environment,” she added. “In doing so, the leaders involved should not use their power and selfishness.”
The speech put Han Lay in the spotlight and also drew condemnation and threats on social media, she said. After the pageant, she stayed in Thailand to avoid potential arrest in her home country, where thousands have been injured or killed since the military takeover. Thousands more are in prison, and in July the military junta executed four pro-democracy activists, including two of the resistance’s most prominent leaders.
But on Sept. 21, after a brief trip to Vietnam, Han Lay was denied entry at Bangkok’s Suvarnabhumi Airport. Thai officials said her Myanmar-issued travel documents were invalid, Reuters reported. She wrote on Facebook the next day that Myanmar police officials were also at the airport and had attempted to reach out to her.
As the world moves on, Myanmar confronts a mounting, hidden toll
“I will refuse to meet with the Myanmar police by using my human right,” she wrote, adding that she had requested help from Thai authorities and the United Nations.

According to Human Rights Watch, the move was “a deliberate political act by the junta to make her stateless.”
“There is no doubt that what transpired was a trap to try to force Han Lay to return to Myanmar, where she would have faced immediate arrest, likely abuse in detention, and imprisonment,” the group’s deputy Asia director, Phil Robertson, said in a statement Wednesday.
He said that governments should be “on guard” against attempts by Myanmar’s military junta to use “similar tactics against overseas dissidents traveling on Myanmar passports in the future.”
“This is hardly the first time repressive Burmese military dictatorships have sought to use their control over Myanmar passports as a weapon against their own people’s rights to travel internationally,” Robertson said.

She only has a few pieces of clothing….
Reactions: Thunderlips71

She can stay with me if she needs a place.
D

Its no Picture of Nectar, but I still liked it.
Reactions: WadeLookingbill
You must log in or register to reply here.

Who is the asshole quiz?

For the parents of HROT, do you lurk on the social media of the boyfriends/girlfriends of your kids?

Idaho man dies while fighting as volunteer in Ukraine...