Somewhere between leaving Memorial Stadium on Sunday and flying home, Chubba Purdy knew.
Nebraska was where he wanted to be.
The clarity was a welcome relief for the former four-star quarterback who had spent more than two months in the transfer portal mulling his options. For two days last week he toured Oklahoma with his parents and sister. Then they awoke at 5 a.m. Friday to travel for a weekend visit in Lincoln, a place they had only seen briefly in June 2018 when Purdy attended a camp.

On Monday, Purdy announced his decision – he’s going to be a Husker. He’ll be back on campus this week to begin classes and immediately joins what will be a loaded spring position battle featuring five scholarship QBs within the new-look offense under offensive coordinator and quarterbacks coach Mark Whipple.

“I just felt really at home when I was there,” Purdy told The World-Herald. “The people there were great – there are nothing but good people at Nebraska, and that’s what I’m looking for.”
One person in particular won Purdy over in Whipple. The longtime OC recruited Purdy in high school and was the first call the player received when he entered the transfer portal Nov. 3. When Nebraska hired Whipple away from Pitt last month, Purdy’s focus shifted too.

“He really is a big reason why I came there, seeing what he’s done in the past,” Purdy said. “Coach Whipple is super smart and knows a lot of football – he’s been around it for a long time. He’s a huge factor why I’m coming to Nebraska.”
The younger brother of former Iowa State starting quarterback Brock Purdy is the second transfer QB to commit to Nebraska in 10 days after former Texas QB Casey Thompson revealed his decision earlier this month. Purdy – who has four years of eligibility remaining compared to Thompson’s two – said Thompson’s addition had no impact on his own evaluation of the school.


There are no guarantees anywhere, said Purdy, who is the 10th NU portal addition overall this offseason. He is “totally fine” with how the battle for the starting spot appears to stack up, even if he’s not “the guy” right away.

“I’m just ready to compete,” Purdy said. “I just want an opportunity to compete and I think that Coach (Scott) Frost and Coach Whipple are going to give me that chance. Whoever gets the job gets the job, but I’m going to be working my tail end off just to be the best that I can be.”
The five scholarship quarterbacks represent a number that Nebraska coaches have previously indicated to be their ideal total. All will be on campus this month. Thompson is the resident college veteran — he started 10 games last year and has appeared in 19 overall. Third-year sophomore Logan Smothers made his first career start against Iowa last year while second-year QB Heinrich Haarberg and 2022 early enrollee Richard Torres will also be in the mix.


The offense, Purdy said, will be a blend of Frost’s up-tempo spread and Whipple’s pro-style attack that helped land Pitt QB Kenny Pickett among the finalists for the Heisman Trophy last season.
The new commit is comfortable with anything asked of him.
“They’re going to be running a lot of what Whipple did at Pitt, maybe doing some stuff Coach Frost wants to do,” Purdy said. “We’re all just going to work together and figure out what works best for Nebraska.”
The 6-foot-2, 215-pound quarterback arrives as a redshirt freshman in eligibility after two seasons mostly on college sidelines. A collarbone injury in fall camp in 2020 kept him out most of that season and impacted his ability to compete for Florida State’s starting job last year, though he said he’s fully healthy now. He has appeared in four total college games, all as a reserve, going 32-of-58 passing for 317 yards and four touchdowns to one interception. He also has 62 rushing yards after running for 1,000-plus as a 2020 recruit from the Phoenix area.


The QB’s real name is Preston, but “Chubba” caught on as a nickname from his dad when he reached 38 pounds as a 1-year-old. He was known around FSU for his perpetually upbeat and positive personality.
Florida State worked hard to retain him, Purdy said. He was originally a priority prep target of FSU coach Mike Norvell, inking with the Seminoles after flipping from Louisville on signing day.


But his recruitment this time came down to Oklahoma and Nebraska. One school stood out for the opportunity to develop and contribute.

“I’m super excited; a lot of stress is off my shoulders,” Purdy said. “Through it all it’s been a tough first couple years at Florida State being injured. I’m just ready to play some college football. God’s put me in the best position and I think Nebraska’s the best position for me. I’ve prayed about it every day and every night and I just think this is the right move.” 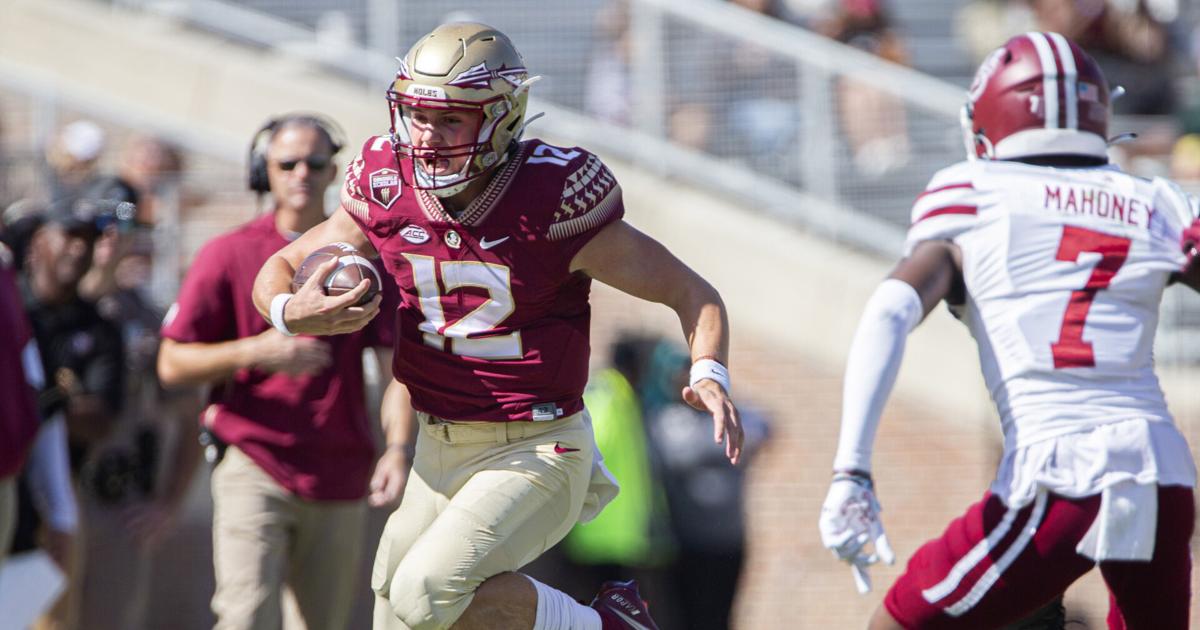 Nebraska has landed its second transfer quarterback in fewer than two weeks as former Florida State QB Chubba Purdy has announced his commitment to the Huskers.

Frost may actually have a decent to above average QB.

Yet it won’t matter. He will break him after 3 weeks of B1G play. Running him 32 times a game.
Reactions: cigaretteman

Chubba could be pretty good. We shall see over the next few years.
Reactions: cigaretteman

now no excuse for fsu hroters to not support iowa fb on black friday
Reactions: billanole, HawkeyeInCentralIowa, noleclone2 and 2 others

That could be since he got hurt at FSU at practice running and he didn't have on a non contact jersey to protect him.

they got that pitt oc though who kicked buttocks last season
Reactions: cigaretteman

desihawk said:
they got that pitt oc though who kicked buttocks last season
Click to expand...

Well he did have a talented 5th year Sr. QB. Chubba probably won't be that good next year but in 3 years he could be.

Brocktober out. Chubbtember in…
You must log in or register to reply here.

You Noles are right....regarding Florida