Nobody Works Harder Than Trump to Undermine His Party's Electoral Edge

By Michelle Cottle
Ms. Cottle is a member of the editorial board.
As today’s politicians go, Senator Michael Bennet is kind of boring. Ideologically moderate. Dispositionally low-key. Scandal-free. A sensible technocrat rather than a charismatic ideologue. Heck, when Mr. Bennet, a Colorado Democrat, ran for president in 2020, he joked that a perk of electing him would be that people could simply forget about him for days on end.
It is a tribute to the weirdness of this political season, then, that Mr. Bennet’s re-election race is shaping up to be one of the midterms’ more interesting and illuminating contests. It isn’t considered a first-tier nail-biter like Georgia’s or Nevada’s, but it promises to be a more serious fight than many had anticipated in largely blue Colorado.
Like Democratic candidates everywhere, Mr. Bennet had already been bracing for electoral headwinds having little to do with his job performance. Among the big-picture fundamentals working against his party are inflation, pandemic fatigue, President Biden’s unpopularity and a thermostatic electorate that, even in less surly times, tends to punish a first-term president’s team in the midterms.
Advertisement
Continue reading the main story


More recently, though, Mr. Bennet’s fortunes have been threatened because of trouble brewing on the Republican side. Specifically, this November’s Senate election map has grown more pear-shaped for the G.O.P. A mix of broad political developments (more on those in a minute) and weak nominees in key battlegrounds is making Republican leaders twitchy — they need a net gain of one seat to control the Senate — prompting them to look around for other places where they could flip Democratic-held seats. Colorado is one of those places. And so Mr. Bennet finds himself navigating the unpredictable crosscurrents roiling the national scene and making this election cycle unsettling for both parties.

Things weren’t supposed to be this complicated. Cruising into the summer, Republicans were feeling feisty, their heads filled with visions of total congressional domination. But then the Supreme Court killed Roe v. Wade, firing up many, many women voters. Gas prices started creeping down. Congressional Democrats passed the Inflation Reduction Act (which is more about tackling climate change and the price of prescription drugs than reducing inflation, but why quibble?). The next thing you know, Democratic voters are feeling more motivated to go to the polls, shrinking the so-called enthusiasm gap between the parties.
Now layer onto this a G.O.P. roster of not-so-sparkling Senate nominees — for which Republicans overwhelmingly have a certain ex-president to thank.
In some cases, Donald Trump’s death grip on his party hurt efforts to recruit broadly appealing candidates. The most notable failures were in New Hampshire and Arizona, where the states’ Republican governors declined to debase themselves in the manner required to woo the Trump-addled base in Senate runs.
Worse, the primary process — in which Mr. Trump meddled heavily — served up multiple nominees of questionable experience, appeal or basic competence.

Take Blake Masters, Mr. Trump’s man in Arizona. A darling of the hard right, Mr. Masters has a tendency to do things like blame Black people for America’s gun violence and accuse Democrats of trying to change “the demographics of our country” by flooding it with immigrants. (For a really wild ride, check out his online musings circa 2007.) Playing footsie with racists and replacement-theory nutters may delight many in the MAGAverse, but it feels a little edgy for a purple state like Arizona. 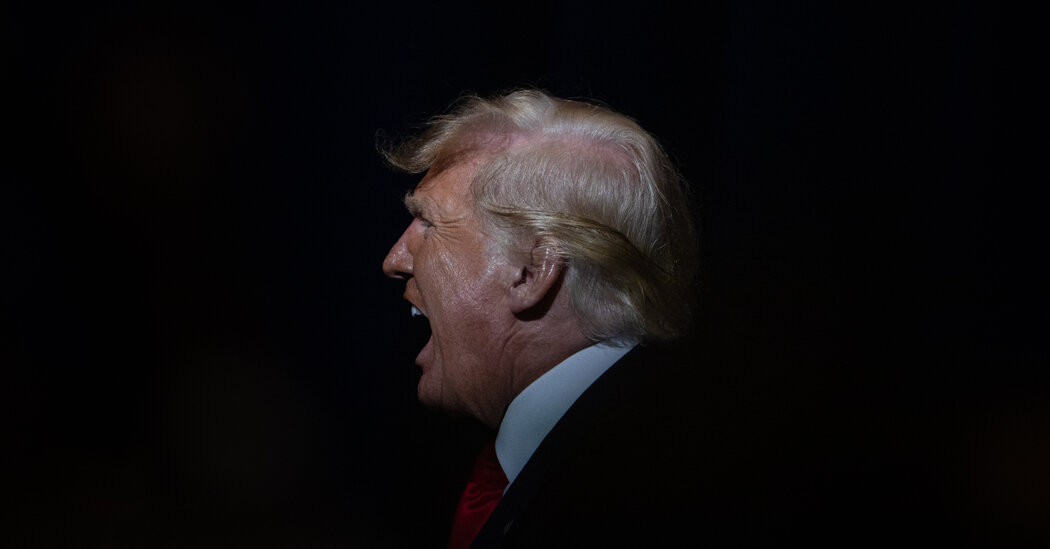 Opinion | The G.O.P. Is in a Grand Old Pickle

Republicans seem to feel less feisty than when they were cruising into the summer.

In Pennsylvania, the Trump-approved Dr. Oz is getting pantsed pretty much every week for being a rich, out-of-touch celebrity carpetbagger. (Crudité, anyone?) In Ohio, J.D. Vance has so far run such a nothingburger of a campaign that one could be excused for forgetting that he is the nominee. And, lordy, what is there to say about Herschel Walker in Georgia? Come for the abuse allegations and incoherent babbling. Stay for the candidate’s fountain of fabrications about his academic achievements and business record.
Recent polling shows Dr. Oz, Mr. Masters and Mr. Walker trailing their Democratic opponents. A couple of public polls show Mr. Vance with a strikingly narrow lead in solidly red Ohio, while FiveThirtyEight’s polling average has him one point behind. Also lagging is Senator Ron Johnson of Wisconsin, who lost his soul — and his grip on reality — to Trumpism and has spent the past couple of years as the Senate’s foremost conspiracymonger.
Even Mitch McConnell, the Senate minority leader, sounds less smug than usual, recently noting that flipping the chamber could prove challenging, in part, because of “candidate quality.”
It’s hard to think of a defeated president who has taken a more aggressive role in undermining his party’s electoral edge. Well played, sir.
In the midst of this Trump-fueled chaos, Colorado has caught Republicans’ eye. In a departure from the cycle’s norm, Republicans there chose a Senate nominee who isn’t a MAGA wing nut: Joe O’Dea, a self-made construction magnate. By the standards of today’s G.O.P., his politics are moderate, and he has little patience for Mr. Trump’s shenanigans. Mr. O’Dea has rejected the election-denial insanity and said he hopes Mr. Trump does not run again in 2024. Mr. O’Dea is pitching himself as a political outsider above rank partisanship.
This is precisely the kind of challenger that Democrats did not want to be facing — and fought to avoid. As they did in multiple states, Democrats tried to manipulate Colorado’s Republican primary, in this case spending millions to paint Mr. O’Dea as a wishy-washy RINO. The presumed aim was to drive conservative voters into the arms of a more MAGAfied candidate who, Democrats figured, would be easier to beat in a general election.
Advertisement
Continue reading the main story


Whatever your views on the overall strategy, it flopped in Colorado. And Mr. Bennet is now saddled with a Republican opponent whom members of his own party worked to brand as a reasonable moderate.

Eager to redefine Mr. O’Dea, Team Bennet is turning to the hot topic of abortion, hitting the Republican as an enemy of reproductive rights. This brings its own challenges, since Mr. O’Dea says he supports abortion access up to 20 weeks and beyond that under extenuating circumstances. Team Bennet is stressing that Mr. O’Dea would have voted to confirm the conservative Supreme Court justices who overturned Roe and is clearly looking for the post-Roe energy to drive voters away from the G.O.P. in general.
Suddenly, even the most cautious Democrats are aspiring culture warriors.
Election Day is still a political eternity away, and it’s tough to know how seriously Republicans will wind up playing in Colorado. Last month at a Washington, D.C., fund-raiser for Mr. O’Dea, Mr. McConnell pledged to go “all in” on the Colorado race. In early August the National Republican Senatorial Committee threw a bit of money into advertising there — a modest quarter million but enough to serve as a warning shot. In mid-August the race got shifted from “likely Democrat” to “leans Democrat” by the handicappers at the nonpartisan Cook Political Report.
Colorado is still Colorado. And Mr. O’Dea is still the underdog. But Mr. Bennet and his party have been put on notice not to take this race for granted. In this highly fluid political moment, not even solid, inoffensive incumbents are safe.
Reactions: mnole03

My prediction is like Cory Gardner, O’Dea outperforms Trump in Colorado by an embarrassingly large margin. I doubt he wins as the electorate here is smart enough to know that a vote for O’Dea is a vote for Mitch McConnell.

What was obvious to Non-Republican voters was that Trump didn't care a damn about the party, but only wanted to use it for his own benefit. If Democrats would have fallen for his lies, he would have easily tried to use that party instead.
Reactions: kcnole63 and cigaretteman
F

Penna would like to thank Corrupt Filthy Don for Odd Ball Oz and Mad Dogstrino.
Reactions: cigaretteman
You must log in or register to reply here.

Adam Kinzinger, an anti-Trump Republican, endorsed pro-democracy candidates, half of them outside his party.