Opinion Is there a sickness in U.S. culture? Yes: The GOP gun cult.

It has been only two weeks since the school shooting in Uvalde, Tex., that left 19 children and two adults dead. Since then, the United States has seen at least 34 more mass shootings along with numerous individual shootings, gun suicides and even a political assassination. This is what happens when you live in a country with more guns than people — and where many teenagers can purchase a military-style assault weapon before they can legally buy a drink.
Sign up for a weekly roundup of thought-provoking ideas and debates
Yet, as if denying that heavy rain causes flooding, Republicans continue to insist that the prevalence of guns has nothing do with the prevalence of shootings. They blame doors, video games, mental illness, “emasculated” men, family breakdown, demons, the lack of prayer in schools, Ritalin, antidepressants, social media, social isolation — anything and everything except the weapons used in these crimes.
All such explanations ignore the obvious rejoinder that our culture is pretty similar to those of Canada, Australia, Britain and other countries that don’t have anywhere close to the same levels of gun violence. We don’t have a monopoly on mental illness, family breakdown or video games. Americans are actually far more religious than adults in other wealthy nations, so we are not suffering from a prayer deficit.
But Republicans do have a point about American culture — just not the one they’re trying to make. There is a sickness in America. It’s our gun cult, which has no counterpart in any other advanced democracy. Republican politicians, the gun lobby and gunmakers — the unholy trinity — are complicit not only in weakening gun laws but also in glorifying firearms and encouraging their sale. After every mass shooting, Republicans inspire more gun sales by warning that Democrats are planning to confiscate guns. By increasing the number of firearms in circulation, that makes the next mass shooting more likely.


Guns have overtaken flags as an obligatory accessory in Republican campaign commercials, and people who have used guns allegedly for self-protection, such as Kyle Rittenhouse, have become Republican folk heroes. Gun ownership has become a mark of tribal identity in red America. More than twice as many Republicans as Democrats own guns, and by far the most popular reason for buying one is personal protection.
Protection from what? Well, it’s no mere coincidence that gun sales have been soaring (primarily among White men) while right-wing politicians and propagandists have been hyping two phantom menaces: First, the criminal threats supposedly posed by desperados from “Democrat cities,” Black Lives Matter protesters and undocumented immigrants. Second, the political threat from Democrats who are supposedly “grooming” children, replacing “legacy Americans” with immigrants of color, and bringing communism to this country. The message to Republicans is that only the Second Amendment can protect their lives and liberty. Republicans are so alarmed about imaginary Democratic plots that 40 percent say violence against the government can be justified.
Much of the GOP fearmongering has an obvious racist taint. Blake Masters, a Senate candidate from Arizona who has Donald Trump’s endorsement, blamed gun violence on “Black people.” Yet in the second-deadliest mass shooting in the past month (the one at a Buffalo grocery store), the 10 people who were killed were Black and the alleged perpetrator was a white teenager who was motivated by the “great replacement” theory that Republicans such as Masters espouse.
Even supposedly sane Republicans who aren’t cowering in caves in Idaho indulge in apocalyptic scaremongering. Sen. Lindsey O. Graham (R-S.C.) says: “I own an AR-15. If there’s a natural disaster in South Carolina where the cops can’t protect my neighborhood, my house will be the last one that the gang will come to, because I can defend myself.” I somehow doubt that Graham is going to be the victim of gang violence during the next tornado that hits his small town of Seneca (“The #1 Place to Retire in South Carolina!”). It’s bonkers to suggest otherwise.
Here is the truth that Republicans never tell their constituents: Owning firearms makes you less, not more, safe. As the Trace, a website devoted to gun news, notes: “Having a gun in the home increases the chance for accidental injury, homicide, and suicide, all of which have been shown to outweigh the potential protective benefits of firearms.” Researchers have found that guns are used for self-defense in less than 1 percent of all crimes, the Trace reports, and that “having a gun in the home was linked with nearly three times higher odds that someone would be killed at home by a family member or intimate acquaintance.”
There is another important truth that Republicans deny: Gun control works. A 2016 research project, which analyzed 130 studies in 10 countries, found that strict limits on gun purchases and ownership were followed — no surprise — by reductions in gun deaths. The same dynamic is evident within the United States. While Texas has been loosening gun laws, California has been tightening them. In 2020, California had 40 percent fewer gun deaths per 100,000 population than Texas.
Republicans are contributing to the bloodbath engulfing America by blocking gun-safety laws while promoting gun ownership. The result is that in 2020, guns became the leading cause of death among children. Unless the gun cult fades on the right, children — and adults — will continue to die needlessly.

"They blame doors, video games, mental illness, “emasculated” men, family breakdown, demons, the lack of prayer in schools, Ritalin, antidepressants, social media, social isolation" A combination of all these things IS the problem...there are reasons people are picking up weapons and killing. It's not like an episode of Phineas and Ferb, "Hey, Ferb. What do you want to do today?" "I dunno, let's go kill some kids." 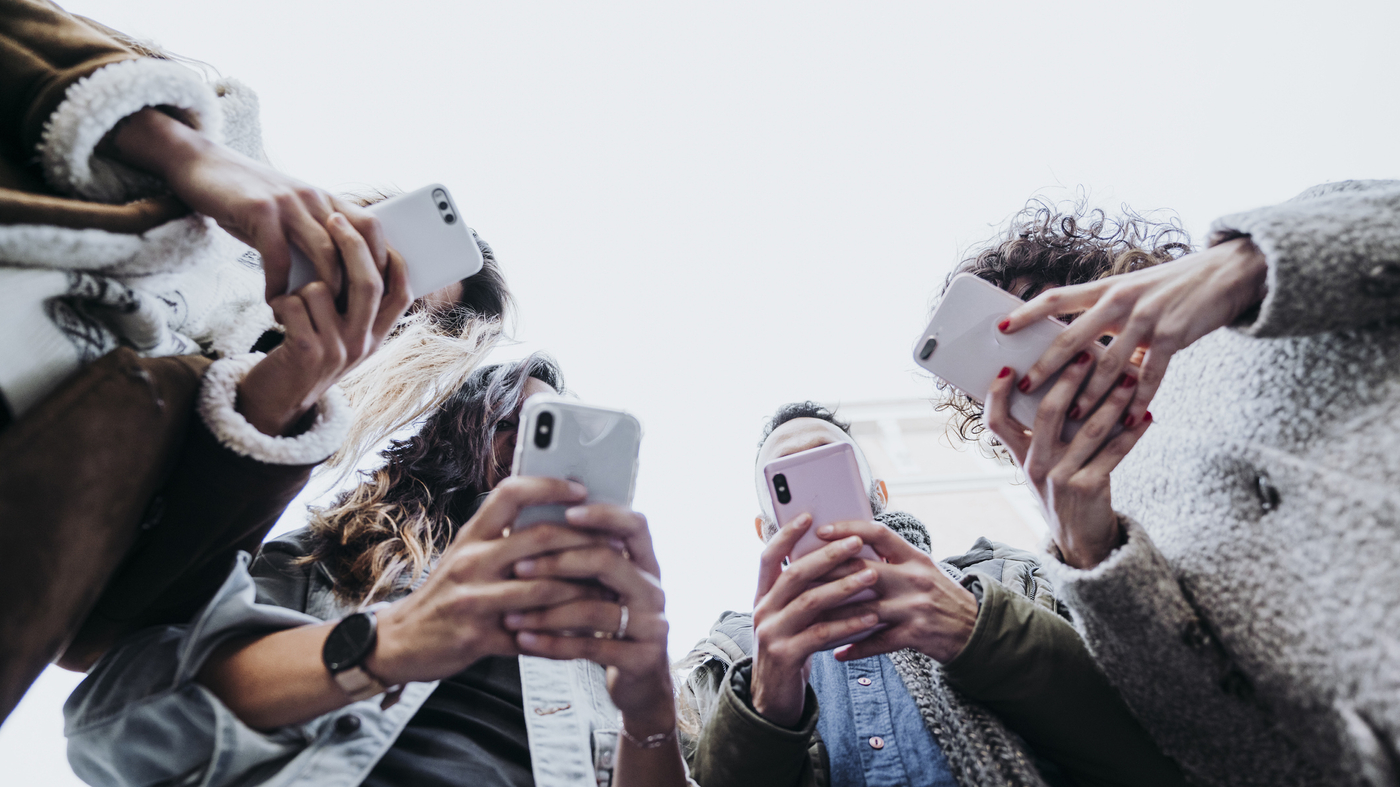 Poll: Americans Say We're Angrier Than A Generation Ago

The latest NPR-IBM Watson Health poll found that 29% of people said they were often angry when checking the news. Another 42% said the news sometimes made them angry.

However, addressing these issues which will require HUGE cultural shifts will take a very long time. Hell, it took us a decade or two to get to where we are now. So, we need to pass gun reform NOW, then immediately pivot to the why.

Canada has already put in place much of what we've discussed here on HROT.

Gun ownership is also relatively high in Canada, at about thirty-five firearms per hundred residents (ranking fifth globally), but the country does not struggle with a similar level of gun violence. As in the United States, Canada’s national government sets gun restrictions that the provinces, territories, and municipalities can supplement. And like its southern neighbor, Canada’s gun laws have often been prompted by gun violence. In 1989, a student armed with a semiautomatic rifle killed fourteen students and injured more than a dozen others at a Montreal engineering school. The incident is widely credited with driving major gun reforms that imposed a twenty-eight-day waiting period for purchases; mandatory safety training courses; more detailed background checks; bans on large-capacity magazines; and bans or greater restrictions on military-style firearms and ammunition.

Changes to the law in 1995 required individuals to obtain a license to buy guns and ammunition, as well as register all firearms. However, in 2012, the requirement to register nonrestricted guns was dropped, and related public records were expunged. Following another mass shooting, at a Quebec City mosque in 2017, the government passed a bill to again require nonrestricted firearms to be registered and allow background checks to consider events from more than five years in the past. In 2020, after a gunman killed twenty-two people in Canada’s deadliest mass shooting, Prime Minister Justin Trudeau announced a ban on “assault-style” firearms.. The legislation also required those who owned now-prohibited firearms to either participate in a buyback program or comply with a strict storage regime. 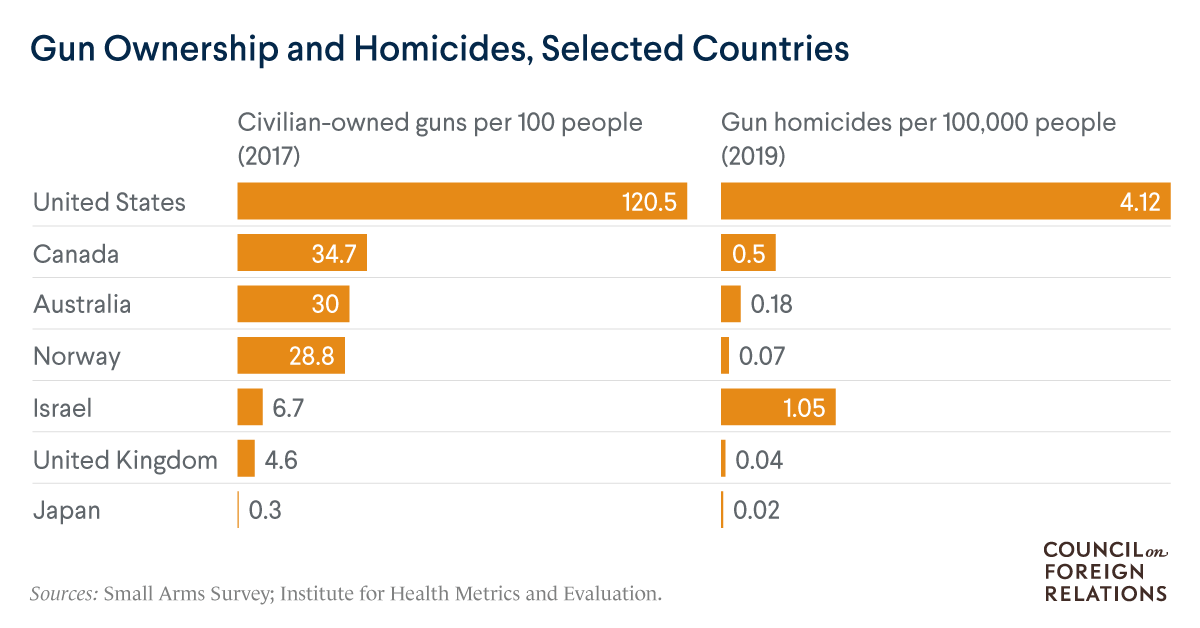 The United States is witnessing another year of record gun violence, raising domestic and international scrutiny of its comparatively loose gun laws and placing pressure on lawmakers to enact meaning…

www.cfr.org
Reactions: TheCainer
You must log in or register to reply here.

A interesting read in the Smithsonian about gun control in the Old West.