With the GOP having transformed from a conservative party to a populist one, the MAGA multitudes are easily triggered by any suggestion that “the people” are not well-served by having their every disreputable prejudice reinforced by rabble-rousing, right-wing media personalities. Or so I discovered last week.
Opinions to start the day, in your inbox. Sign up.
I had written a column arguing that no one should pay any attention to Joe Rogan or other commentators who manifestly have no idea what they are talking about. In response, Stephanie Ruhle of MSNBC tweeted that companies such as Spotify, which carries Rogan’s podcast, are just giving their audiences what they want. I agreed but pointed out: “Giving people what they want may be good business but it’s not necessarily good for society. That’s why the lack of gatekeepers is a big problem.”
Cue the predictable right-wing outrage. The author of a book on “virtue signaling” — an actual professor, no less — tweeted: “If you want a vision of the future, imagine @MaxBoot stamping on a human face, forever. Keep your totalitarian ‘gate keeping’ to yourself.” The press secretary for Florida Gov. Ron DeSantis (R) suggested my sentiments were Stalinist and wrote: “Max Boot and the Bezos Post are not good for society. Time to gatekeep them!” Others argued that I was revealing my hatred of democracy because I was born in the Soviet Union.

In truth, I am upset about the lack of information gatekeepers precisely because my family came from the U.S.S.R. I know how precious freedom is — and how easily it can be lost. There is nothing more corrosive for the health of a free society than the nonstop emission of conspiracy theories, falsehoods, and incitements to outrage from social media, talk radio, podcasts and right-wing television “news.”
Freedom House reports that democracy has been on the decline around the world for the past 15 years — the same period that has seen the rise of social media. In her best-selling new book “How Civil Wars Start: And How to Stop Them,” political scientist Barbara F. Walter argues that this is no coincidence. Social media, she writes, has become “the vehicle that launches outsiders with autocratic impulses to power, riding a popular wave of support.” Examples include Recep Tayyip Erdogan in Turkey, Narendra Modi in India, Viktor Orban in Hungary, Jair Bolsonaro in Brazil — and, of course, Donald Trump.

All of these demagogues are masters of a medium whose algorithms are designed to give users the content they crave. “It turns out,” Walter notes, “that what people like the most is fear over calm, falsehood over truth, outrage over empathy.” That explains why Breitbart is more popular on Facebook than the New York Times and why Ben Shapiro’s the Daily Wire is more popular than the BBC.


That, in turn, explains, why so many Americans believe that the FBI masterminded the Jan. 6, 2021, attack on the Capitol, that Trump won the 2020 election and that coronavirus vaccines are unnecessary or even harmful. That explains, also, why last year a crowd of QAnon believers gathered in Dallas expecting John F. Kennedy Jr. to return from the dead. Social media is full of useful, accurate information, but what most users really respond to is fear, falsehood and flakiness.
It is not clear to me that democracy can survive so much disinformation, and yet Republicans are bashing Big Tech because they are so mad that Trump and a few other political arsonists have been banned from major social media sites. The GOP position seems to be that there should be no gatekeepers at all, aside from those algorithms that feed collective outrage.
This is a deeply destructive and profoundly anti-conservative position. While populists embrace the mob, conservatives fear it. That’s one reason the Founders included in our political system so many checks on the will of the voters.

In 1788, defending the selection of senators by state legislatures, Alexander Hamilton argued: “It is an unquestionable truth that the body of the people in every country … do not possess the discernment and stability necessary for systematic government. To deny that they are frequently led into the grossest errors by misinformation and passion would be a flattery which their own good sense must despise.”
The only thing that Hamilton got wrong was his too-clever-by-half suggestion that ordinary people would realize their need for elite guidance. Modern America is full of people who think that “doing your own research” on vaccines is better than listening to scientists and doctors.
We had better figure out how to reduce the torrent of falsehoods pouring out of social media, talk radio, podcasts and cable networks before we drown in misinformation. Companies from Spotify to Fox Corp. to Facebook parent Meta need to stop peddling disinformation just because it’s profitable and popular. And if they refuse to do their civic duty, we need to figure out some way to regulate online content, while still respecting the First Amendment, just as the Federal Communications Commission did with its “fairness doctrine” in the broadcast age.

"I had written a column arguing that no one should pay any attention to Joe Rogan or other commentators who manifestly have no idea what they are talking about." - And there is solid proof that Mr. Boot has a clue about which he spouts?
Reactions: waterboy4582

He’s allowed to know about the things I approve him knowing. Anything more is potentially dangerous.

I’ve given it some thought, and this is really best for society.
Reactions: Warrior Poet31 and Big Hawk D-Port

Why do liberals feel the need to prove what giant dipshits they are over and over?
Reactions: Warrior Poet31

waterboy4582 said:
Why do liberals feel the need to prove what giant dipshits they are over and over?
Click to expand...

It’s in their blood. They can’t help it
W

It's a safe bet that anything this jagoff thinks the opposite is true. 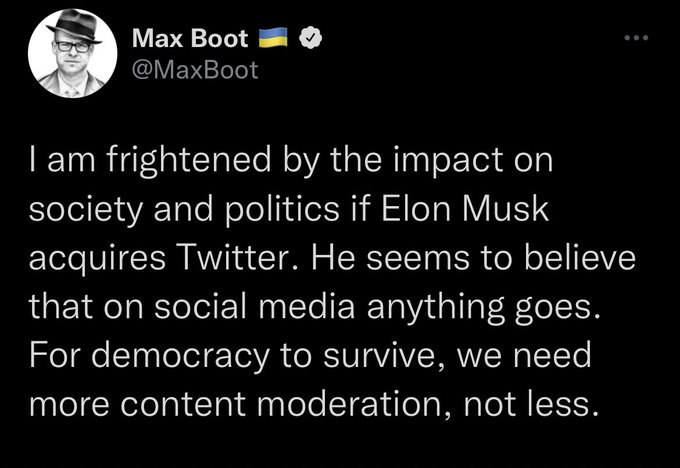 Warrior Poet31 said:
It's a safe bet that anything this jagoff thinks the opposite is true.

So that guy believes for Democracy to survive you need less free speech?
You must log in or register to reply here.

Opinion The media must say it: The GOP is undermining democracy