The invasive spotted lanternfly — which sports an expansive diet of plants — has made its first appearance in Iowa after spreading from the East Coast.


The spotted lanternfly was first detected in the United States in 2014 from stones imported by a Pennsylvania landscaping company, said Julie Urban, an evolutionary biologist at Pennsylvania State University who studies the insect.

Sightings have since been confirmed in at least 16 states, according to New York state Integrated Pest Management. Iowa will mark the 17th state reporting the spotted lanternfly. Eleven of those states are experiencing infestations, with Indiana and Ohio being the closest affected locations to Iowa.


Although the area surrounding the Iowa detection didn’t show signs of infestation, the state ag department is urging residents to be on the lookout for the spotted lanternfly. Its varied and voracious appetite, along with its hitchhiking prowess, could threaten the country’s grape, orchard, plant nursery and logging industries if it continues to spread.


What is a spotted lanternfly?​


The spotted lanternfly is native to China, India and Vietnam. Its preferred menu includes a wide variety of fruit, ornamental and woody trees and plants, such as grapes, hops, oak, apple maple and the invasive tree of heaven.


The insects have a strawlike beak that sucks out sap from plants. After they get their fill, they excrete honeydew — a sugary substance where sooty mold can develop, Pruisner said.


“It kind of wrecks people's outdoor experience and can be hard on their landscape plants,” she said about the mold.


Spotted lanternflies produce only one generation of insects a year, their eggs hatching between April and June. The resulting infants jump from place to place to taste-test their pick of plant hosts.

“They're like little children: They'll put anything in their mouths,” Urban said. “So that makes them hard to detect because they kind of diffuse across the environment.”


The spotted lanternflies molt several times before they emerge around July as adult insects with wings. Although about only an inch long, they feed voraciously before mating and laying eggs starting in August. Freezes kill off the adults during the winter, and the life cycle begins all over again once the eggs hatch.


Because they’re so mobile and feed on a spread of plants, spotted lanternflies can infiltrate different industries, habitats and neighborhoods. They can even lay their hitchhiker eggs on vehicles and trains, Urban said.


“The darn thing about them is with this movement,” she said. “Because they're in constant motion, we have no idea how far they can get.”


Although spotted lanternflies have a broad diet of plants, they don’t kill all of their meals, Urban said. The insect will be a stressor that many infected plants will survive. Additionally, spotted lanternflies don’t normally infect plants deep within forest areas, instead focusing on trees and shrubs in disturbed areas.


Still, the spotted lanternfly can make grapes unmarketable and kill their vines — which could devastate American vineyards if it continues to spread. And although it may not wipe out other plants, it still leaves an economic dent on infected nurseries that have to quarantine and manage their products to prevent further spread.


The possibility of a similar economic and environmental impact in Iowa casts concern. Although the state is well-known for its corn and soybean crops, Iowa also contains orchards, small-fruit producers and gardens that are susceptible, Pruisner said.


“It would be those specialty crops that would feel the pinch by this insect,” she said.


How to spot a spotted lanternfly​


At this time of the year, spotted lanternflies should be in their nymph phases, where they sport a combination of black and white — and sometimes red — coloring. When in large numbers, they’re easy to see migrating along trunks at dusk or nighttime, according the ag department. During the day, they usually cluster at the base of the plant.


While the spotted lanternfly can damage plants, it’s not harmful to humans. If you think you have found a spotted lanternfly, you can call Iowa’s Entomology and Plant Science Bureau at (515) 725-1470 or email Entomology@IowaAgriculture.gov. You can also contact your local county Iowa State University Extension Office. 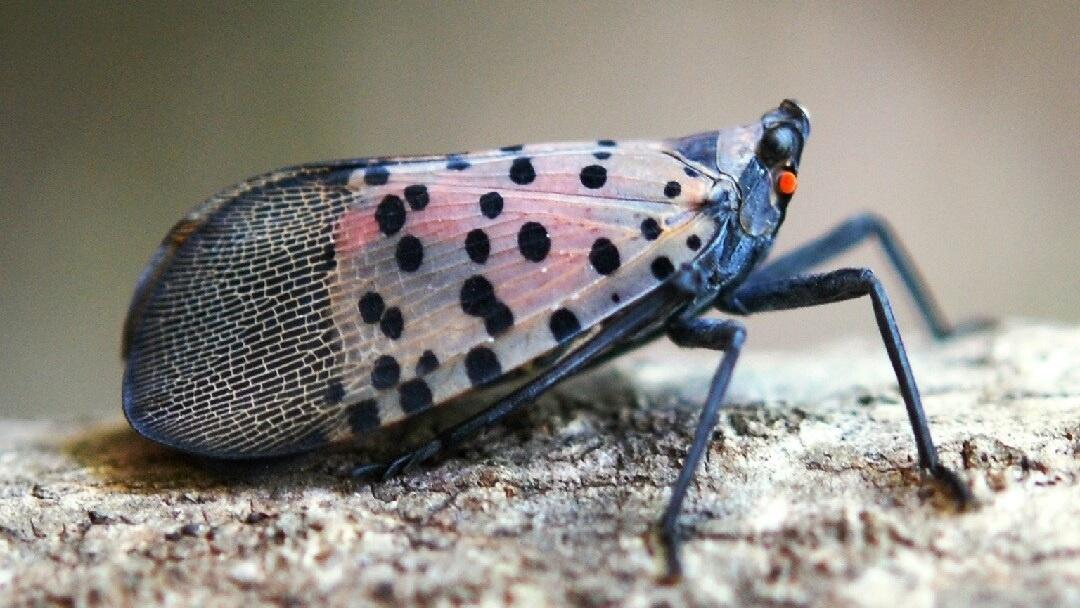 That bug looks like a dumbass
Reactions: cigaretteman
B

Pfi$er just announced a seventy billion dollar, no bid investment from the CDC to develop a Lanternfly vaccine.
You must log in or register to reply here.

New Nuke in Georgia is preparing to go online