osting traffic death toll numbers on highway signs — which the Iowa Department of Transportation has done since 2013 — doesn’t reduce crashes and may actually increase them, a new study shows.


Messages on electronic signs are designed to make motorists correct bad behavior and drive more safely, but they can draw a driver’s mind from the road, said Joshua Madsen, an assistant accounting professor and behavioral scientist at the University of Minnesota who co-authored the study published last week in the journal “Science.”


“What’s the cost of the two-second distraction?” Madsen said in an interview with The Gazette. “If you’re navigating a complicated road section, with lots of cars around you, two seconds can be the matter between life or death.”

Madsen and Jonathan Hall, a University of Toronto assistant professor of economics who studies transportation, analyzed 844,939 crashes within 10 kilometers down the road of electronic signs in Texas from 2010 to 2017.


Texas consistently displayed the death toll messages for one week of every month on 880 signs across the state, so the researchers were able to compare weeks in which the messages were displayed to weeks when they were not. Madsen and Hall compared the same times and days of week, also controlling for weather and holidays.


The Iowa DOT has been posting messages on electronic since Aug. 5, 2013, as part of the Zero Fatalities campaign. Iowa has 78 dynamic message boards that stretch across roadways.


Every Friday, the Iowa DOT posts a new safety message that includes a running total of traffic deaths so far in the year. It also shares the information on Twitter and on a blog.

Some of the highway messages that have appeared over the years include:

“The focus of our messaging is not to be funny — the focus is to present a traffic safety message in a way that is memorable and sticks with drivers,” Iowa DOT Spokeswoman Tracey Bramble said in an email Wednesday. “This could include the use of humor, references to pop culture or holidays, appeals to emotion, and more.”


But the death toll numbers are sobering. As of Wednesday, Iowa has had 82 traffic fatalities this year, up 24 percent from this time last year. Iowa had 354 traffic deaths in 2021, despite an effort to keep this number below 300.

The Iowa State Patrol has noted speeding — sometimes at 100 mph or higher — is a major factor in the uptick in fatal crashes.


The Iowa DOT has seen Madsen’s and Hall’s study as well as other research about the effectiveness of electronic messages, Bramble said.


“This is a single study that focuses on one location,” she said. “To our knowledge, we do not know of another study that has been able to replicate the findings in another location.”


Bramble said the Iowa DOT has done spot checks on speed data for locations around the message boards on days messages are shown and has not seen any “noticeable decrease in speeds.”


“Also, in the 8 1/2 years of doing these messages, we have never heard of our messages being a contributing factor in a crash,” she said.


“It’s counterintuitive, but the analysis is solid,” Gerald Ullman, a transportation engineer at Texas A&M University, College Station, who wasn’t involved with the study but wrote a perspective published alongside the study, Science reported. Ullman told Science he doubts drivers are processing larger and small death tolls differently. 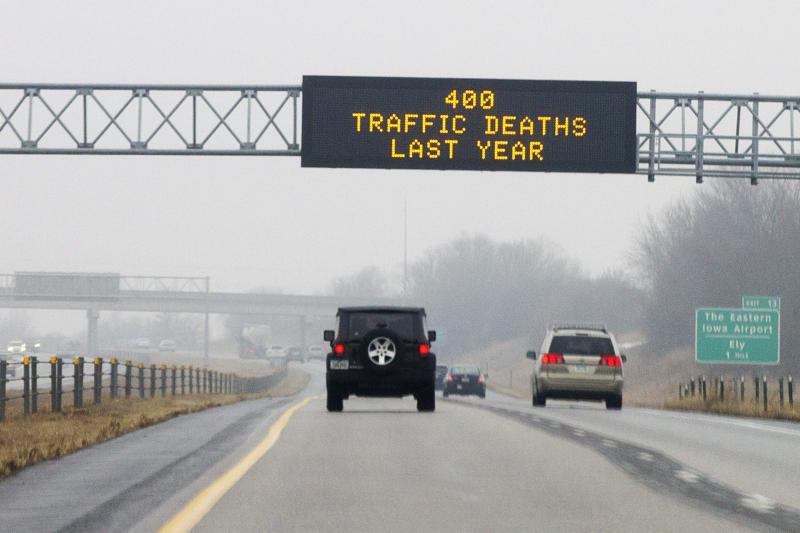 Messages on electronic signs are designed to make motorists correct bad behavior and drive more safely, but they can draw a driver’s mind from the road, said Joshua Madsen, an assistant accounting professor and behavioral scientist at the University of Minnesota who co-authored the study...

As a huge believer in the law of unintended consequences, how can i resist reading a piece with a headline like that.

edit: ok, having read it, it's a texas study. they read slower there, so i could see the uptick.
Reactions: cigaretteman

The following is a free message provided to the driving public by the Iowa Department of Transportation: avoid distracted driving.

OMG ... LOOK OUT!!!
Reactions: cigaretteman
A

The following is a free message provided to the driving public by the Iowa Department of Transportation: avoid distracted driving.

My high school german teacher once told a story about idioms in language, and how there was once some german who was decapitated when sticking his head further out of a bus windo after being told to "look out". Probably a myth, but a good one.
Reactions: SoonerBeAHawk
J

Probably shouldn't post messages warning you of upcoming traffic delays either then.

But the 40% of drivers that are obviously on their phone when I meet them on highway are perfectly safe.

this is like worrying about 2 people that have a wooden match in their hand while ignoring the 50 people with a bucket of gas and an ignited flare.

I never have a problem reading them but people really over react behind me when I pull over to read them though.
Reactions: cigaretteman
You must log in or register to reply here.

Judges rely on Wikipedia for their opinions, a new study finds

Off Topic Saturday at 7:19 PM
cigaretteman

The 'mortality gap' between Republican and Democratic counties is widening, study says. Here's why.