The day before Russia invaded Ukraine, former President Donald J. Trump called the wartime strategy of President Vladimir V. Putin of Russia “pretty smart.” His remarks were posted on YouTube, Twitter and the messaging app Telegram, where they were viewed more than 1.3 million times.
Right-wing commentators including Candace Owens, Stew Peters and Joe Oltmann also jumped into the fray online with posts that were favorable to Mr. Putin and that rationalized his actions against Ukraine. “I’ll stand on the side of Russia right now,” Mr. Oltmann, a conservative podcaster, said on his show this week.
And in Telegram groups like The Patriot Voice and Facebook groups including Texas for Donald Trump 2020, members criticized President Biden’s handling of the conflict and expressed support for Russia, with some saying they trusted Mr. Putin more than Mr. Biden.
The online conversations reflect how pro-Russia sentiment has increasingly penetrated Twitter, Facebook, YouTube, right-wing podcasts, messaging apps like Telegram and some conservative media. As Russia attacked Ukraine this week, those views spread, infusing the online discourse over the war with sympathy — and even approval — for the aggressor.
Advertisement
Continue reading the main story


The positive Russia comments are an extension of the culture wars and grievance politics that have animated the right in the United States in the past few years. In some of these circles, Mr. Putin carries a strongman appeal, viewed as someone who gets his way and does not let political correctness stop him.
“Putin embodies the strength that Trump pretended to have,” said Emerson T. Brooking, a resident senior fellow for the Atlantic Council who studies digital platforms. “For these individuals, Putin’s actions aren’t a tragedy — they’re a fantasy fulfilled.”
Support for Mr. Putin and Russia is now being expressed online in a jumble of facts, observations and opinions, sometimes entwined with lies. In recent days, commenters have complimented Mr. Putin and falsely accused NATO of violating nonexistent territorial agreements with Russia, which they said justified the Russian president’s declaration of war on Ukraine, according to a review of posts by The New York Times.
Others have spread convoluted conspiracy theories about the war that are tinged with a pro-Russia sheen. In one popular lie circulating online, Mr. Putin and Mr. Trump are working together on the war. Another falsehood involves the idea that the war is about taking down a cabal of global elites over sex trafficking.
In all, pro-Russian narratives on English-language social media, cable TV, and print and online outlets soared 2,580 percent in the past week compared to the first week of February, according to an analysis by the media insights company Zignal Labs. Those mentions cropped up 5,740 times in the past week, up from 214 in the first week of February, Zignal said.

The narratives have flourished in dozens of Telegram channels, Facebook groups and pages and thousands of tweets, according to The Times’s review. Some of the Telegram channels have more than 160,000 subscribers, while the Facebook groups and pages have up to 1.9 million followers.
(It is difficult to be precise on the scope of pro-Russian narratives on social media and online forums because bots and organized campaigns make them difficult to track.)

ar, when the Soviet Union was viewed by many Americans as a foe. In recent years, that attitude shifted, partly helped along by interference from Russia. Before the 2016 U.S. presidential election, Kremlin-backed groups used social networks like Facebook to inflame American voters, creating more divisions and resistance to political correctness.
After Mr. Trump was elected, he often appeared favorable to — and even admiring of — Mr. Putin. That seeded a more positive view of Mr. Putin among Mr. Trump’s supporters, misinformation researchers said.

“Putin has invested heavily in sowing discord” and found an ally in Mr. Trump, said Melissa Ryan, the chief executive of Card Strategies, a consulting firm that researches disinformation. “Anyone who studies disinformation or the far right has seen the influence of Putin’s investment take hold.”
At the same time, conspiracy theories spread online that deeply polarized Americans. One was the QAnon movement, which falsely posits that Democrats are Satan-worshiping child traffickers who are part of an elite cabal trying to control the world.
Advertisement
Continue reading the main story 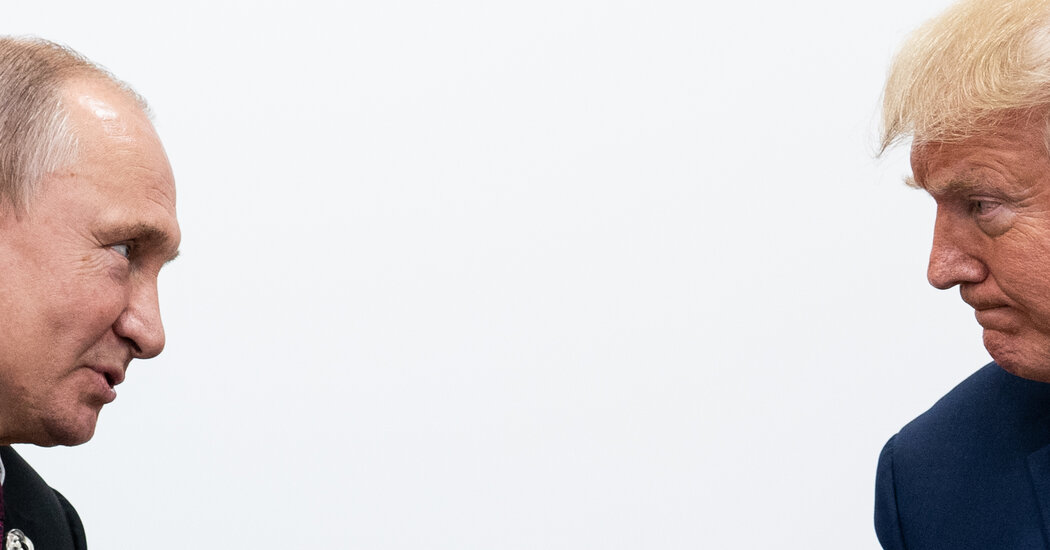 ‘I’ll Stand on the Side of Russia’: Pro-Putin Sentiment Spreads Online

The Russia-Ukraine war is now being viewed by some Americans through the lens of conspiracy theories, misinformation researchers said. Roughly 41 million Americans believe in the QAnon conspiracy theory, according to a survey released on Thursday from the Public Religion Research Institute. This week, some QAnon followers said online that Mr. Putin’s invasion of Ukraine was simply the next phase in a global war against the sex traffickers.
Lisa Kaplan, the founder of Alethea Group, a company that helps fight online misinformation, said the pro-Russia statements were potentially harmful because it could “further legitimize false or misleading claims” about the Ukraine conflict “in the eyes of the American people.”
Not all online discourse is pro-Russia, and Mr. Putin’s actions have been condemned by conservative social media users, mainstream commentators and Republican politicians, even as some have criticized how Mr. Biden has handled the conflict.
“Vladimir Putin’s invasion of Ukraine is reckless and evil,” Representative Kevin McCarthy, the House Republican leader, said in a statement on Twitter on Thursday.

On Tuesday, Representative Adam Kinzinger, a Republican from Illinois who was censured recently by the Republican Party for participating in the committee investigating the Jan. 6 insurrection, criticized House Republicans for attacking Mr. Biden, tweeting that it “feeds into Putin’s narrative.”

But those with a pro-Russia stance have gotten louder online. Before the invasion, the Gateway Pundit, a far-right website, published a story listing “fun facts” about Russia and Ukraine, including the Russian talking points that are being used as justification for an invasion. The article spread in Facebook groups that support Mr. Trump, reaching up to 565,100 followers, according to data from CrowdTangle, a Facebook-owned analytics tool.
Advertisement
Continue reading the main story


On a podcast on Wednesday, Stephen K. Bannon, Mr. Trump’s former adviser, also praised Mr. Putin as “anti-woke.” He suggested the Ukrainian conflict was “not our fight.”
After Russia’s attack began, some online users explained Mr. Putin’s motives by blending them with conspiracy theories about Covid-19. One Twitter account named War Clandestine declared that Mr. Putin was targeting biolabs in Ukraine that were operated by the United States. The idea was made more believable, the author said, because of the conspiracy theory that the United States engineered Covid-19 at a lab in Wuhan, China.
Pro-America influencers like Mikel Crump and John Basham, who have a combined following of 99,200, amplified the thread. Twitter later suspended the War Clandestine account, plus a second one by the same user for trying to evade the ban, but people continued posting screen recordings of the thread online.
Twitter said that the accounts by the user were permanently suspended for violating its abusive behavior policy and that it was monitoring for emerging narratives that violate its rules. Mr. Crump and Mr. Basham did not immediately respond to a request for comment.
Some pro-Russia commentators insisted they were right. Many blamed Mr. Biden, dredging up old conspiracy theories about his son Hunter and Hunter’s employment at a Ukrainian gas company when Mr. Biden was vice president and engaged in diplomatic efforts with the country. There was no evidence of wrongdoing by the Bidens, but conservatives seized on the narrative during the 2020 election.
When reached for comment, Mr. Oltmann, the conservative podcaster, said, “You really have no idea about Ukraine. People support Russia because you did not do the right thing when it came to the fraud and corruption of Biden. I pray for the people in Ukraine but equally pray the people who facilitated the evil communist agenda in the U.S. are held accountable.”
In an email, Ms. Owens, the conservative talk show host, also said the Russia-Ukraine war was Mr. Biden’s fault. “Ukrainians are dying because of the Biden family’s criminal connections and insistence on stoking conflict in the region,” she said.
Advertisement
Continue reading the main story


The growing appreciation for Mr. Putin was captured in recent polling from the Economist and YouGov, which showed he was viewed more favorably by Republicans than Mr. Biden. Another recent poll from Yahoo News and YouGov found that 62 percent of Republicans believed Mr. Putin was a “stronger leader” than Mr. Biden.
That sentiment was echoed in an informal poll online on Wednesday, when a QAnon influencer asked followers in the Patriot Voice group on Telegram if they trusted Mr. Putin. Nearly everyone who responded to the question said the same thing: yes.
Reactions: FlickShagwell

Weis should go back to never tweeting about politics.
Reactions: ParkerHawk, FlickShagwell, win4jj and 2 others

Formerly Rockymtnole said:
Weis should go back to never tweeting about politics.
Click to expand...

What was Trump referring to when he said it?I haven’t seen video yet of DT calling Putin “Pretty smart”.

swagsurfer02 said:
What was Trump referring to when he said it?I haven’t seen video yet of DT calling Putin “Pretty smart”.

Well, that’s kinda what I’m asking. Is it savvy because of timing or tactics or what is the reasoning for considering it genius.

I would’ve said Rommel was a genius tactician but didn’t agree with what he was doing.
J

swagsurfer02 said:
Well, that’s kinda what I’m asking. Is it savvy because of timing or tactics or what is the reasoning for considering it genius.

I would’ve said Rommel was a genius tactician but didn’t agree with what he was doing.
Click to expand...

Did you also think Bin Laden was a genius for being able to successfully pull off 9/11?
J

swagsurfer02 said:
Well, that’s kinda what I’m asking. Is it savvy because of timing or tactics or what is the reasoning for considering it genius.

I would’ve said Rommel was a genius tactician but didn’t agree with what he was doing.
Click to expand...

How about this one?

jhawk23 said:
Did you also think Bin Laden was a genius for being able to successfully pull off 9/11?
Click to expand...

No, but I think Bill Maher called them courageous or something

jhawk23 said:
How about this one?

In my opinion, I can respect an adversary but completely disagree with him. I think Biden was just asked about this like 2 days ago.
Reactions: Aleister_Crowley

Here's the full hour long interview to take more things out of context.

PRESIDENT TRUMP: The polls for me have never been higher. And I guess against Biden, but who wouldn't be winning?

I would say that the majority of each party is behind Ukraine. It’s nice to have something to finally be united behind.
Reactions: cigaretteman
You must log in or register to reply here.

How Russia and Right-Wing Americans Converged on War in Ukraine

The Russian Orthodox Leader at the Core of Putin’s Ambitions