Putin Is Onto Us

By Thomas L. Friedman
Opinion Columnist
阅读简体中文版閱讀繁體中文版
Sign up for the Russia-Ukraine War Briefing. Every evening, we'll send you a summary of the day's biggest news. Get it sent to your inbox.
As the Russian Army continues to falter in Ukraine, the world is worrying that Vladimir Putin could use a tactical nuclear weapon. Maybe — but for now, I think Putin is assembling a different weapon. It’s an oil and gas bomb that he’s fusing right before our eyes and with our inadvertent help — and he could easily detonate it this winter.
If he does, it could send prices of home heating oil and gasoline into the stratosphere. The political fallout, Putin surely hopes, will divide the Western alliance and prompt many countries — including ours, where both MAGA Republicans and progressives are expressing concerns about the spiraling cost of the Ukraine conflict — to seek a dirty deal with the man in the Kremlin, pronto.
In short: Putin is now fighting a ground war to break through Ukraine’s lines and a two-front energy war to break Ukraine’s will and that of its allies. He’s trying to smash Ukraine’s electricity system to ensure a long, cold winter there while putting himself in position (in ways that I’ll explain) to drive up energy costs for all of Ukraine’s allies. And because we — America and the West — do not have an energy strategy in place to dampen the impact of Putin’s energy bomb, this is a frightening prospect.
When it comes to energy, we want five things at once that are incompatible — and Putin is onto us:
1. We want to decarbonize our economy as fast as we can to mitigate the very real dangers of climate change.
Advertisement
Continue reading the main story


2. We want the cheapest possible gasoline and heating oil prices so we can drive our cars as fast and as much as we want — and never have to put on a sweater indoors or do anything to conserve energy.
3. We want to tell the petrodictators in Iran, Venezuela and Saudi Arabia to take a hike.
4. We want to be able to treat U.S. oil and gas companies as pariahs and dinosaurs that should pump us out of this current oil crisis and then go off in the woods and die and let solar and wind take over.
5. Oh, and we don’t want any new oil and gas pipelines or wind and solar transmission lines to spoil our backyards.
I understand why people want all five — now. I want all five! But they involve trade-offs, which too few of us want to acknowledge or debate. In an energy war like the one we’re in now, you need to be clear about your goals and priorities. As a country, and as a Western alliance, we have no ladder of priorities on energy, just competing aspirations and magical thinking that we can have it all.
If we persist in that, we are going to be in for a world of hurt if Putin drops the energy bomb that I think he’s assembling for Christmas. Here’s what I think is his strategy: It starts with getting the United States to draw down its Strategic Petroleum Reserve. It is a huge stock of crude oil stored in giant caverns that we can draw on in an emergency to offset any cutoff in our domestic production or imports. Last Wednesday, President Biden announced the release of 15 million more barrels from the reserve in December, completing a plan he laid out earlier to release a total of 180 million barrels in an effort to keep gasoline prices at the pump as low as possible — in advance of the midterm elections. (He didn’t say the last part. He didn’t need to.)

According to a report in The Washington Post, the reserve contained “405.1 million barrels as of Oct. 14. That’s about 57 percent of its maximum authorized storage capacity of 714 million barrels.”
I sympathize with the president. People were really hurting from $5- and $6-a-gallon gasoline. But using the reserve — which was designed to cushion us in the face of a sudden shut-off in domestic or global production — to shave a dime or a quarter off a gallon of gasoline before elections is a dicey business, even if the president has a plan for refilling it in the coming months.
Putin wants America to use up as much of its Strategic Petroleum Reserve cushion now — just like the way the Germans gave up on nuclear energy and he got them addicted to Russia’s cheap natural gas. Then, when Russian gas was cut off because of the Ukraine war, German homes and factories had to frantically cut back and scramble for more expensive alternatives. 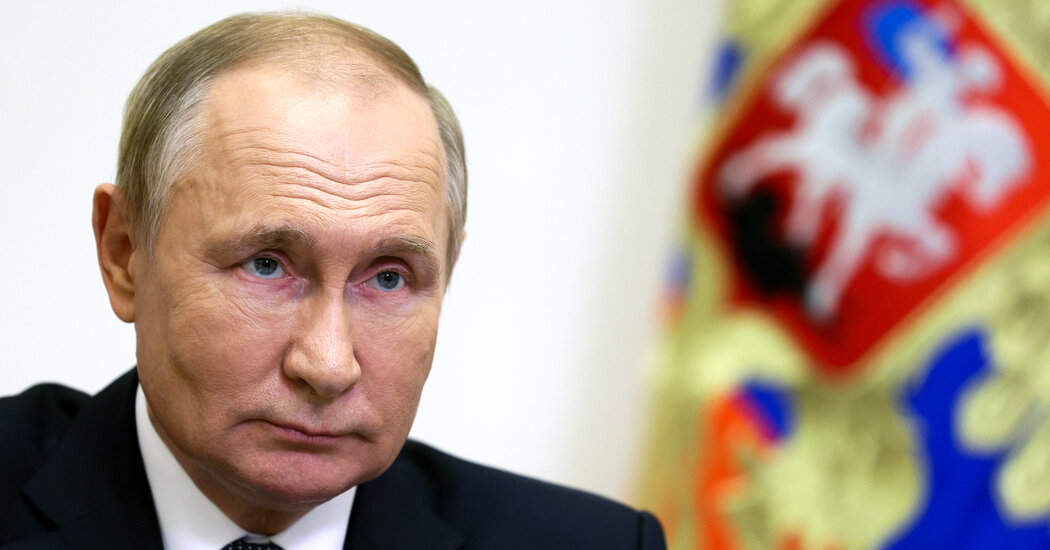 Opinion | Putin Is Onto Us

When it comes to energy, the West wants five incompatible things at once.

Next, Putin is watching the European Union gear up for a ban on seaborne imports of crude oil from Russia, starting Dec. 5. This embargo — along with Germany and Poland’s move to stop pipeline imports — should cover roughly 90 percent of the European Union’s current oil imports from Russia.
As a recent report from the Center for Strategic and International Studies in Washington, D.C., noted, “Crucially, the sanctions also ban E.U. companies from providing shipping insurance, brokering services or financing for oil exports from Russia to third countries.”
The U.S. Treasury and European Union believe that without that insurance, the number of customers for Russian oil will shrink dramatically, so they are telling the Russians that they can get the insurance for their oil tankers from the few Western insurance companies that dominate the industry only if they lower the price of their crude oil exports to a level set by the Europeans and the United States.
My sources in the oil industry tell me they seriously doubt this Western price fixing will work. Russia’s OPEC Plus partner Saudi Arabia is certainly not interested in seeing such a buyers’ price-fixing precedent set. Moreover, international oil trading is full of shady characters — does the name Marc Rich ring a bell? — who thrive on market distortions. Oil tankers carry transponders that track their locations. But tankers engaged in shady activities will turn their transponders off and reappear days after they’ve made a ship-to-ship transfer or will transfer their cargo into storage tanks somewhere in Asia for re-export, in effect laundering their Russian oil. Oil in just one very large tanker can be worth roughly $250 million, so the incentives are enormous.
Advertisement
Continue reading the main story


Now add one more dodgy player to the mix: China. It has all kinds of long-term, fixed-price contracts to import liquefied natural gas from the Middle East at roughly $100 a barrel of oil equivalent. But because of President Xi Jinping’s crazy approach to containing Covid — in recent months some 300 million citizens have been under full or partial lockdown — China’s economy has slowed considerably, as has its gas consumption. As a result, an oil industry source tells me, China has been taking some of the L.N.G. sold to it on those fixed-price contracts for domestic use and reselling it to Europe and other gas-starved countries for $300 a barrel of oil equivalent.
Now that Xi has locked in his third term as general secretary of the Communist Party, many expect that he will ease up on his lockdowns. If China goes back to anything near its normal gas consumption and stops re-exporting its excess, the global gas market will become even more scarily tight.
Last, as I noted, Putin is trying to destroy Ukraine’s ability to generate electricity. Today more than one million Ukrainians are without power, and as one Ukrainian lawmaker tweeted last week, “Total darkness and cold are coming.”
So add all of this up and then suppose, come December, Putin announces he is halting all Russian oil and gas exports for 30 or 60 days to countries supporting Ukraine, rather than submit to the European Union’s fixing of his oil price. He could afford that for a short while. That would be Putin’s energy bomb and Christmas present to the West. In this tight market, oil could go to $200 a barrel, with a commensurate rise in the price of natural gas. We’re talking $10 to $12 a gallon at the pump in the United States.
The beauty for Putin of an energy bomb is that unlike setting off a nuclear bomb — which would unite the whole world against him — setting off an oil price bomb would divide the West from Ukraine.
Obviously, I am just guessing that this is what Putin is up to, and if the world goes into recession, it could take energy prices down with it. But we would be wise to have a real counterstrategy in place, especially because, while some in Europe have managed to stock up on natural gas for this winter, rebuilding those stocks for 2023 without Russian gas and with China returning to normal could be very costly.
If Biden wants America to be the arsenal of democracy to protect us and our democratic allies — and not leave us begging Saudi Arabia, Russia, Venezuela or Iran to produce more oil and gas — we need a robust energy arsenal as much as a military one. Because we are in an energy war! Biden needs to make a major speech, making clear that for the foreseeable future, we need more of every kind of energy we have. American oil and gas investors need to know that as long as they produce in the cleanest way possible, invest in carbon capture and ensure that any new pipelines they build will be compatible with transporting hydrogen — probably the best clean fuel coming down the road in the next decade — they have a welcome place in America’s energy future, alongside the solar, wind, hydro and other clean energy producers that Biden has heroically boosted through his climate legislation.
I know. This is not ideal. This is not where I hoped we would be in 2022. But this is where we are, and anything else really is magical thinking — and the one person who will not be fooled by it is Vladimir Putin.

Meh. It’s a real threat, but petro states talk solidarity but usually act in their own interests. If prices soar due to Russian production gaps, the others will increase output. And, China is going to do everything they can to provide stability. Their economy is lagging, and crippling energy shortages do not help their export driven economy get back on track.
Reactions: cigaretteman
You must log in or register to reply here.